I made a short-term decision when I woke Saturday to go for a mountain hike.  I originally thought. as I packed my pack early Saturday, to head for Doyles River Falls, but I was concerned with all the rain we've had lately that parts of the trail could be under water.  So instead, I decided to head someplace new and hike the Appalachian Trail for a few miles out and back.  I choose a part of the trail that I've never been on - from McCormick Gap to the Calf Mountain Shelter in the extreme Southern part of Shenandoah National Park.  For going to SNP, it is about a short a drive as I can have - less than two hours.  The hike itself looked fairly mellow - maybe four miles each way with no extreme elevation gains.  The elevations would be between 2,500 and 3,000 feet.

Here is the track of my hike, with the shelter a my turn-around point indicated by the red arrow. 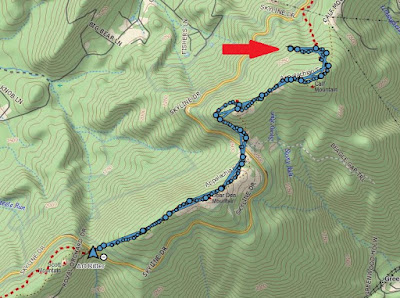 And here is the elevation profile, with the start at the red arrow and the shelter at the purple arrow. You can see that you do all this work to get over Bears Den Mountain and end up crossing Beagle Gap at about the same elevation as when you started.  Then you do it all over again to get over Calf Mountain to the shelter at about 2,600 feet.  I think out and back, the hike was in the 1,800 - 2,000 foot elevation gain and loss (so typical of the Southern Appalachians and the Blue Ridge), and the total round trip distance was 8.7 miles. 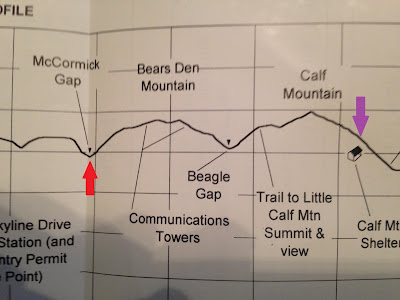 One thing I like to do when I hike solo to a new place is get a sense whether or not this could be a good group hike, and I think that this could be.  I'd go back, and I'd love to lead a little group of hikers along.

I started hiking about 9:20 and the fog was really thick.  The air was cool, mid-60's,  But between fog, sweat, and the moisture dripping from trees, I was wet quickly and stayed that way.  I could only have about 60 feet of visibility most of the way in to the shelter because of the fog.  All the way in, I only saw four people, three heading south - all long distance hikers - and one blitzing along north doing a trail run who passed me like I was standing still.  The southbound hikers were a man and his dog that crossed McCormick Gap as I was ready to get going on my hike.  He was hiking from Harper's Ferry a couple of hundred miles north of us to Tennessee.  The other two were a father and son who were wrapping up eight days hiking the AT through Shenandoah.  Made me remember when I tried that two years ago - the hike lasted two days after my friend ruined his knee!

At the Calf Mountain Shelter was a thru-hiker who looked miserable.  He had gotten drenched the night before and even though it was noon, he had not started hiking yet.  I got him the weather forecast on my DeLorme inReach ( how cool is that to be able to get a weather forecast in the middle of nowhere?).  By this time, the fog was burning off.  I had a sandwich and an apple for lunch, but I offered him my apple and he was thrilled.  It felt good to do a little "Trail Magic" while out hiking. I was hungry but figured that I could easily get another apple any time.   His name was Three Times, and before long, his buddy Lazy Eagle strolled in.  Right about then, I started south to retrace my steps and ran into hiker after hiker heading north.  Some of them were out for only a few days, but many were thru-hikers heading to Mount Katahdin in Maine.  Most were men with big bushy beards, but there was one woman hiking solo - Big Bird.  I enjoyed chatting with them all for a few seconds and wishing them well on their long trek.  And it was a good chance to use my trail name, Grey Ghost.

The hike back was sunny and warm with improving visibility.  I even saw bees and butterflies.  For the whole hike, I enjoyed listening to bird songs - cat bird, cardinal, towhee, hooded warbler, oven bird, Carolina chickadees.  And I also saw a ruffed grouse - such a rare sight while hiking - and a cottontail, as well as many towhees and chickadees.  The hike was mostly through forest, but there were several open areas, almost like balds, so a good bit of variety.

I really enjoyed my hike, and will share some photos from my day in the mountains, starting with a view near the top of Bear Den Mountain less than an hour into the hike. 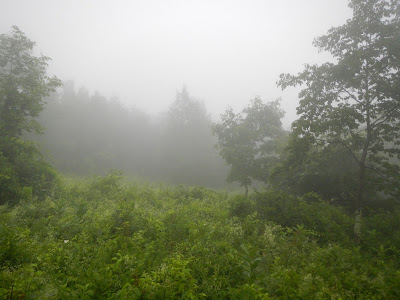 Not much of a view from the summit of Little Calf Mountain. 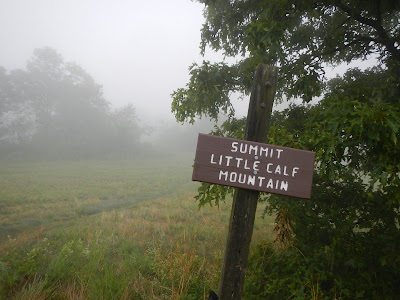 Here is what the Appalachian Trail looks like in the fog. 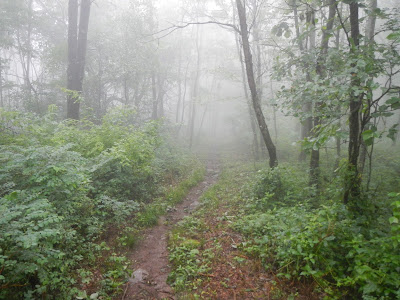 This big old oak dominated all other trees around it. 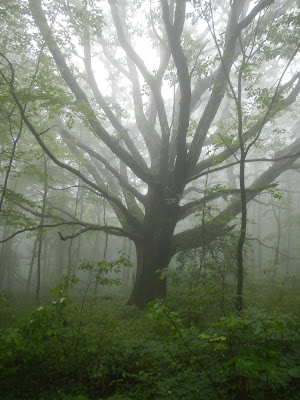 Even on a clear day, the summit of Calf Mountain has no view. 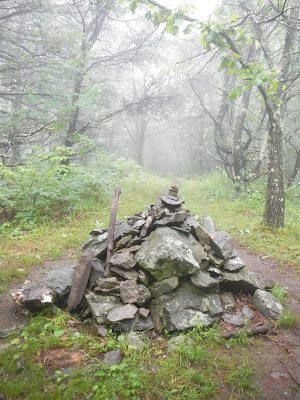 This is what Little Calf Mountain looked like on the hike back - still not clear enough for views but definitely improving. 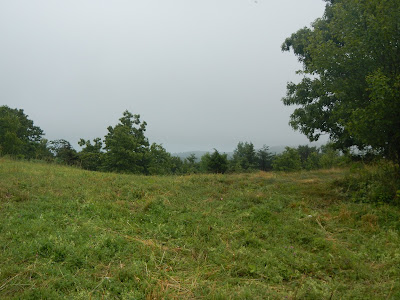 And here is Beagle Gap.  Bears Den Mountain rises ahead and to the right - the final high point on my hike. 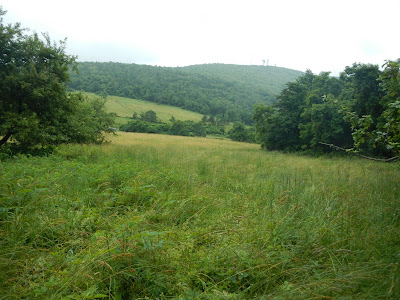 The summit of Bears Den Mountain is not so pretty, but we all sure like good cell reception. 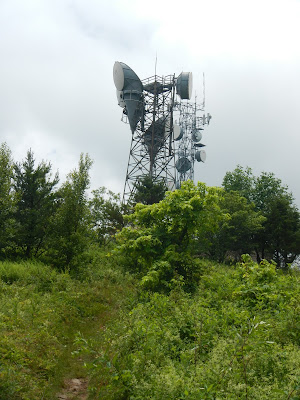 This beautiful orange butterfly was enjoying the sun and some nectar. 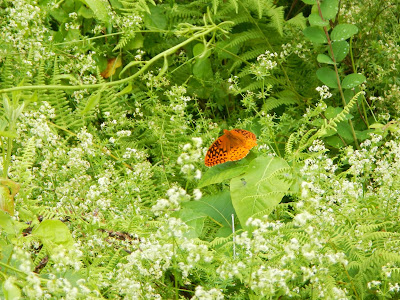 I need to look this flower up.  I think it is a primrose.  I saw a number of them. 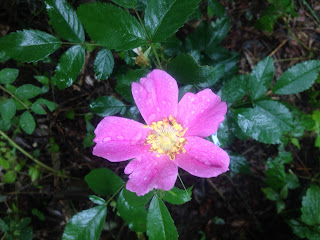