I had last Friday off, and after my bad experience the weekend before aborting the hike to Devil's Marbleyard, I wanted to "get back on the horse."  I wanted to do a hike by myself, at my own pace, and in somewhat cooler weather.  For my hike, I picked one of my favorites: the 8.0 mile Jones Run - Doyle's River Falls loop in Shenandoah National Park.

I already wrote about my too-close encounter with the black bear near the end of the hike, so in this post, I will talk about the scenery.  At the start of the hike, I discovered that I'd left my InReach on all week and the battery was dead, so I didn't capture the track.  But here is a three dimensional view of the area.  I started and ended at the arrow, descended along Jones Run to the low point where Jones Run and the Doyle's River meet, then climbed up along the Doyle's River back to the Appalachian Trail, where I returned to the car (and nearly tripped over a large black bear).  There are two loops, and for the first time in years, I took the longer one.  It loses and gains 1,800 feet, so there is a good workout along the way. 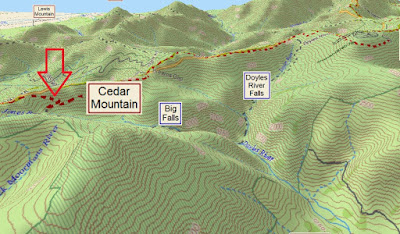 The weather was pleasant for July in Virginia, with starting temperatures in the mid-60's and highs about 75 - maybe a little warmer down in the stream valley.  It felt a lot better than my attempt at hiking five days before.  When I hike, I like to look for unusual mushrooms and other things, and I spotted these early on: 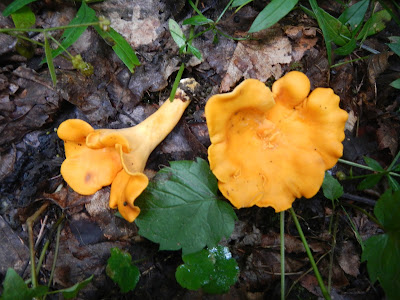 There are three different falls on this trip.  The first is Big Falls on Jones run, about 1.7 miles in. 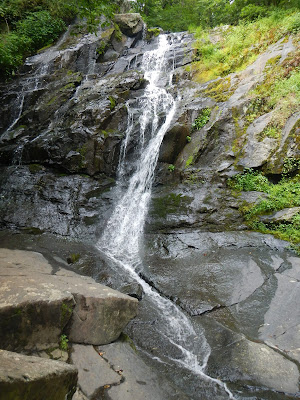 When I took this photo of what a bear did to a log looking for grubs, I had no idea that I would be getting a great look at not one, but two, bears in a while. 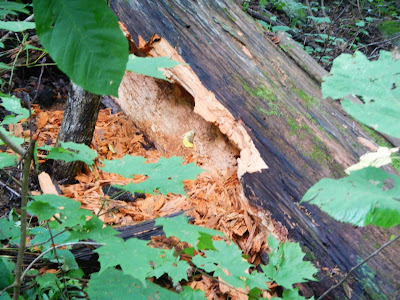 Autumn is still a ways off, but not for this tulip poplar leaf! 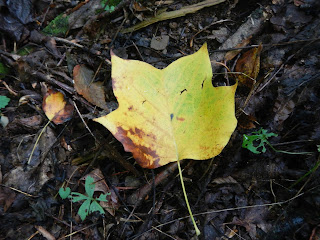 The nicest waterfall on the hike is Lower Doyle's River Falls.  It cascades a long way in a series of steps. 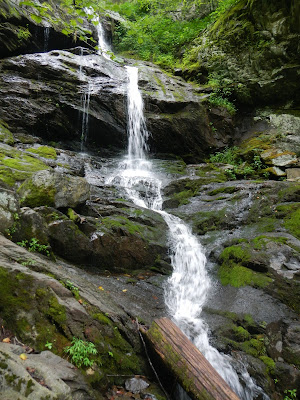 I hadn't seen a soul until I got to these Falls (there is a shorter, less steep trail to them from the Skyline Drive, and they are popular.)  I asked one of them to snap a photo of me. 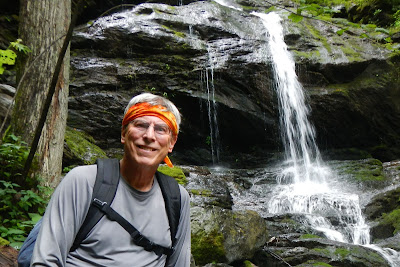 Between the lower and the upper falls (shown here) was where I saw the first bear.  I watched him for five or 10 minutes and I don't think he knew I was there.  He was about 100 feet away down in the stream, flipping over rocks.  You can see that the Upper Falls is two big steps, and very pretty.  It is quite different from the long, narrow chute of the Lower Falls. 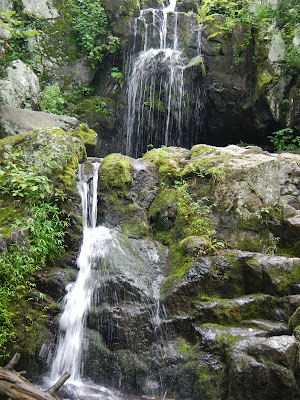 I ate lunch at the Upper Falls, then kept hiking upwards.  I heard a bear back in the woods but didn't see it.  I saw a large deer about 50 feet off the trail but couldn't get a good photo.  I decided to detour a bit and check out the Doyle's River cabin of the Potomac Appalachian Mountain Club.  It is in a nice setting.  I'd love to stay here. 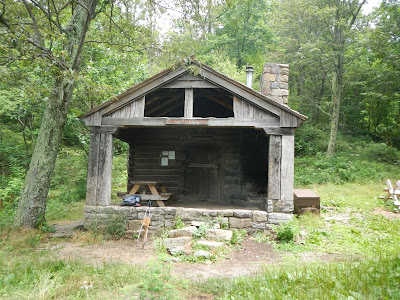 But if you ever do, watch where you put your feet if you come out in the middle of the night to head to the outhouse!  I didn't see any copperheads, but a couple I talked to at the falls had seen two here when they checked out the cabin site. 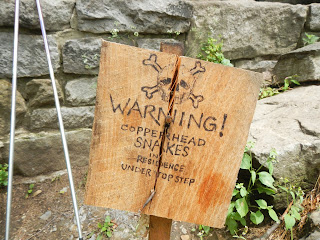 This beautiful butterfly was in front of the cabin.  It doesn't have to worry about copperheads. 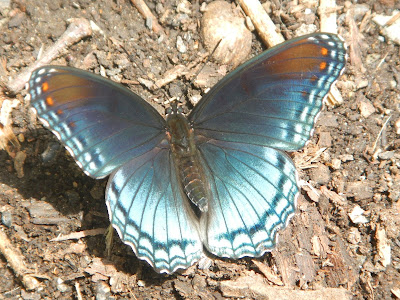 From the cabin, I hiked uphill for about another third of a mile until I reached the Appalachian Trail.  I noted the sign warning of bear activity on the trail, little knowing that I would shortly have my own bear experience that I doubt I will forget soon.

About a tenth of mile after running into the bear, I emerged by the Skyline Drive for a moment to catch a nice look of the Doyle's River watershed.  I had been hiking deep down there just a couple of hours before. 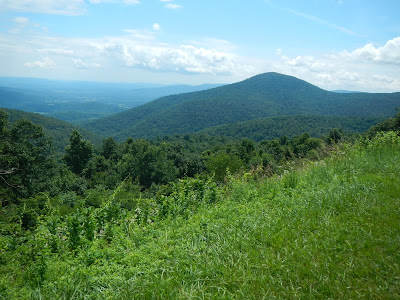 Near the end of the hike, I passed through an open area with nice flowers.  These were loaded with bees, butterflies, and hummingbird moths. 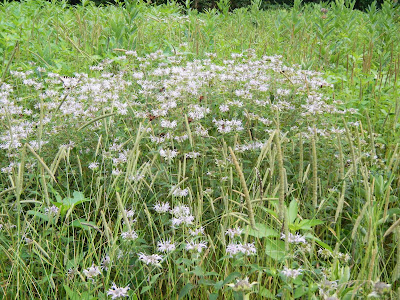 It felt good to start and complete a hike again.  I was tired from the 8 miles and the elevation, and still excited by the meeting with the bear - and glad that it turned out okay for both of us.  I loved being back on this trail!
Posted by o2bhiking at 2:49 AM