I was supposed to have Friday off from work, but meetings got scheduled, so my boss said that it was okay to switch my day off to Thursday.  Unexpectedly having that day off on my hands, I decided to go hiking.  Imagine that!  I packed my pack - including emergency gear I knew I would not need, but you should always be prepared - and headed out for the 2.5 hour drive.  My goal: to hike the 7 mile River Bank Trail, shown here with my start and end at the purple arrow, in Staunton River State Park in the southern Piedmont of Virginia.  I hiked this route clockwise. 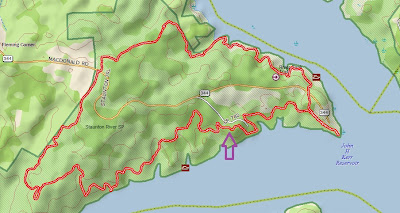 Staunton River State Park is at a peninsula where two rivers, the Dan (south) and the Staunton (north), converge at the John Kerr Reservoir.  The hike is pretty easy, with some elevation gain and loss - profile below - but nothing too steep.  Although this may look steep, keep in mind that between the high and low elevation, there is only about 160 feet (about 50 meters), and the total elevation gain and loss is only 961 feet over 7 miles.  Still, seven miles is seven miles, and I am also dealing with a chronically sore left knee and a newly sore right foot, so it felt like plenty.

It seems as if winter gave way to summer instead of spring.  Our dreary, wet, cold March turned to April with five straight days over 80 degrees F.  Included in this streak was one day over 90!  Along the way, everything that should have bloomed in early March, mid-March, late March, and early April in our normal prolonged spring bloomed all at once in early April.  Yesterday, when I hiked in Staunton River State Park, the high was an unseasonably warm 82 degree.

I'd hoped to see lots of wildlife along the rivers, but didn't see much - just a couple of ducks, likely mergansers, flying rapidly away.  I also got a glimpse of the elusive white-tailed deer bounding through the forest.  But I did have solitude.  During my four hours of walking and exploring, I saw more lizards (3) than humans (0) along the trail.  And I did see enough wildlife to post one of my "What Am I?" sequences.

The trail started with a pleasant walk through a pine forest.  Most of the hike was through open woods, with a lot of direct and indirect sun.  I actually applied sunscreen after a time. 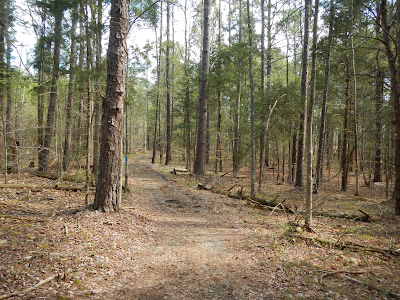 In the middle of the path was a partial skeleton of a predatory mammal, perhaps a fox.  All that remained was the skull and the backbone, along with some fur.  Everything else was gone, and even the ribs were all chewed off.  Clearly, this animal was a carnivore that provided a meal for some other carnivore. 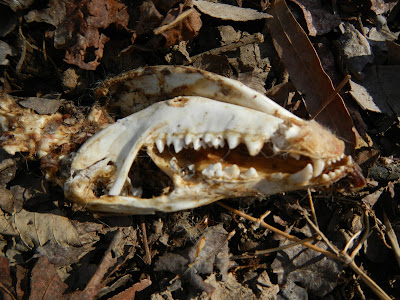 About half the hike had full or partial river views, such as this view of the Dan River in the first mile or two of my walk. 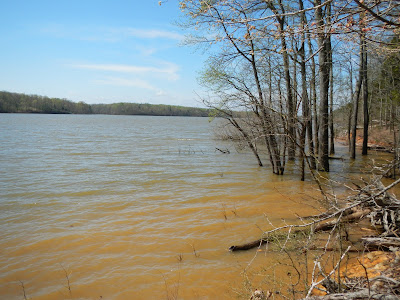 Mother Nature really starts dressing up this time of year!  I love the redbud in bloom! 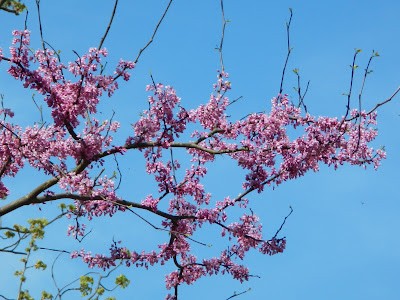 On the other side of the peninsula were great walks along the Staunton River. 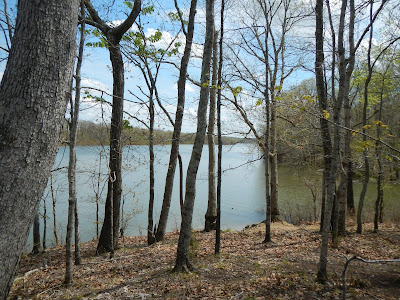 A short side trail led to a nice view of the two rivers converging into the huge Kerr Reservoir.  Believe it or not, this is a relatively small branch of this large man-made lake! 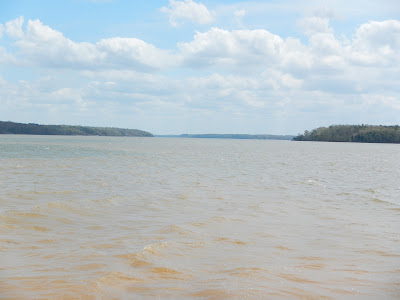 I love the color of the newly minted leaves in spring.  The Italian word for spring, "primavera" or "first greening," says it perfectly! 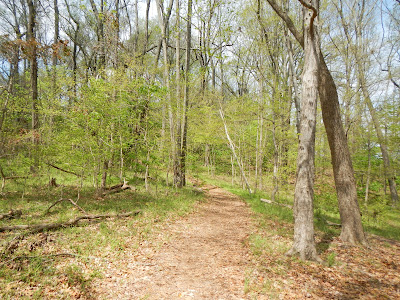 With a mile or so to go, I came on more great views of the Dan River.  I enjoyed my hike a lot.  While it was not spectacular, there were many nice views, some wildlife, and some fine woodlands.  Plus, a day outside on a nice always beats a day at work, doesn't it? 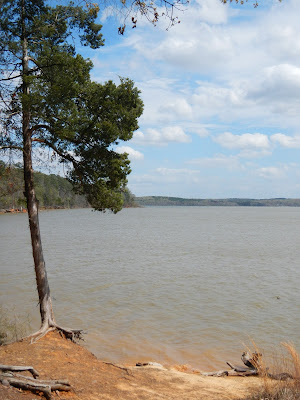