A few weeks ago, we headed down to the Tidewater to tour Fortress Monroe ... 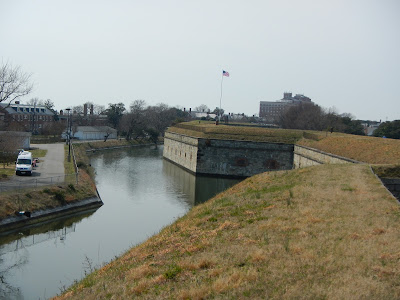 ... and its very interesting museum about its amazing history.  Among other things, ex-Confederate President Jefferson Davis was imprisoned in one of its casemates after the Civil War.  I gazed across the water from Fortress Monroe to Fort Wool, sitting at peacefully rest now in Hampton Roads. 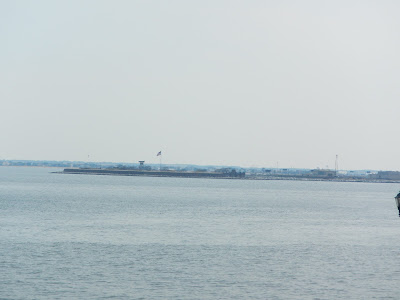 A mile or so to the right of the view in this photo, in March 1862, the USS Monitor and the CSS Virginia - often incorrectly referred to as the Merrimack - fought the first battle between two ships clad with iron, forever changing naval history in the process.  Neither ship, both only a few days in action at the time of their famous battle, would survive the year.  The Virginia was scuttled by her crew that spring as McClellan's Peninsula Campaign turned the Tidewater Area into Federally occupied territory, and the Monitor sank in a bad storm off Cape Hatteras, North Carolina on New Years Eve.  Major parts of it have been recovered, and they along with many artifacts can be seen at the excellent Mariners' Museum in Newport News, Virginia.

Fortress Monroe and Fort Wool guarded the Hampton Roads, formed where the mighty James River, the Elizabeth River, the Chesapeake Bay, and some smaller rivers all join together to flow into the Atlantic.  From there, by boat, it is perhaps 90 to 100 miles by river to Richmond, passing by Jamestown along the way.  So this area forms one bookend of a historical story.

The reason that Richmond, VA exists where is does is because of the numerous falls that make the river unnavigable past that point.  But it also means that Richmond can be attacked by a naval force, and in May of 1862, the CSS Virginia sitting somewhere at the bottom of Hampton Roads, the US Navy did just that.  A force of warships, led by the Monitor and the USS Galena, headed up the James River as McClellan's huge army advanced on land up the peninsula formed by the James and York Rivers.  The mission of the US fleet was to shell the Confederate capital and force its surrender.

That is where the other bookend, Drewry's Bluff, comes in.  Sitting at a bend in the river just seven river miles south of Richmond, the point of land looms 90 feet over the water.  The Confederates built an earthen fort there, and equipped in with large cannon.  Included in the fort's garrison were sailors from the CSS Virginia, now without a ship.  When the Navy came along towards Richmond on May 15, 1862, the Confederates drove them back with cannon fire, causing major damage to the Galena.  The capital was not shelled, and McClellan's strategic defeat by Lee during the Seven Day's Battles (see my post on Malvern Hill here) meant that the war would go on for almost three more brutal years.  But as part of that, slavery was abolished, and that perhaps would not have happened had the Union prevailed in these battles and ended the war in the spring of 1862.

Today being a beautiful spring day - our first one on a weekend this spring (well, maybe last weekend also, but I was out of town) - led me to want to take a walk in the little time I had.  I choose to walk around Drewry's Bluff, only a mile of walking, but very interesting.  And when I looked at my camera card, I realized that I had a half dozen photos still on it from seeing Fortress Monroe, and it occurred to me that I was looking at the photographic bookends of the same story - one at the coast, one far inland, but both connected by a river and a brutal war - and two revolutionary ships and their crews.

Today, there is no brutality to be seen.  No screams from cannonballs or from injured and dying men.  No ships in the river coming under hell's fire.  It was just a pleasant walk on a lovely spring day to see a part of our nation's history.  I'll share a few photos from my little walk today with you, starting with a view of the path through the woods, which would have been totally open ground in 1862. 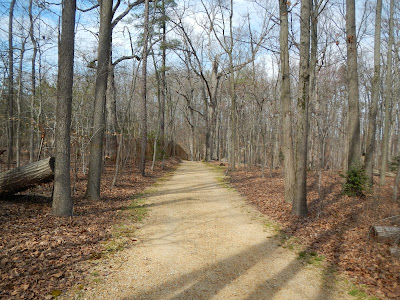 Despite 151 years, you can still see some of the remaining fortifications.  The fort was only captured when abandoned during the Confederate army's retreat to Appomattox in April, 1865, and the US Navy never again attempted to invade Richmond after May, 1862. 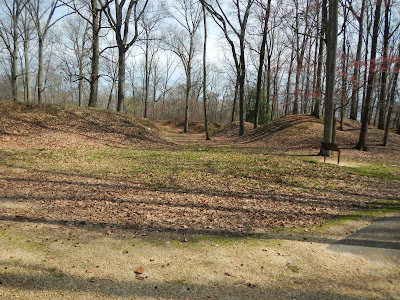 You can see what a clear view downriver the forts gunners would have had from their position nearly 100 feet above. 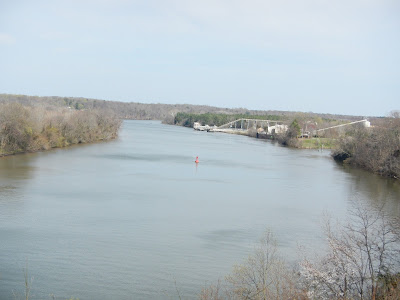 One gun, representative of the fortifications of the day, remains at the fort, silently (thank goodness!) keeping its vigil. 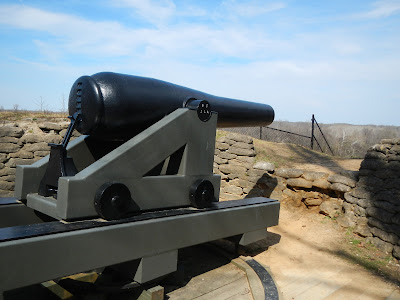 This is the gunner's eye view from this virtually impregnable position. 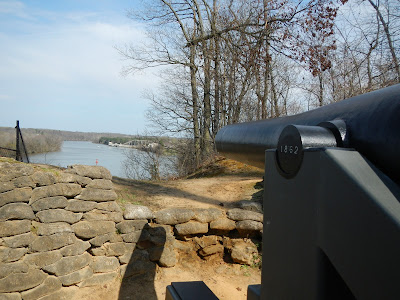 This part of the fortification is away from the river a little more. 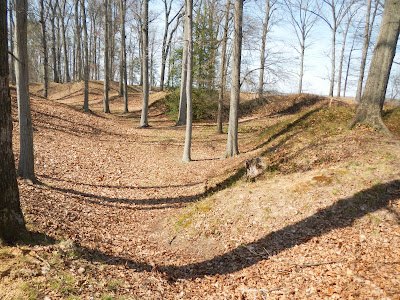 ﻿I enjoyed my walk around this "historical bookend" today.  There are a lot of informative plaques to read, great views, and a sense of history.  I hope that you enjoyed coming along, and learned a little about an important historical event that is often overlooked.
Posted by o2bhiking at 4:58 PM

Email ThisBlogThis!Share to TwitterShare to FacebookShare to Pinterest
Labels: historical