Yesterday, I had the day off from work and planned a hike.  My original plans had been to go for a one night backpacking trip in the rugged Laurel Forks area on the West Virginia border.  But given the snows we have been having lately, especially in the mountains, that seemed ill-advised, so I have put that trip on hold.  Instead, I headed to Caledon Natural Area State Park in Northern Virginia on the Potomac River.  See the red star below for the location:

Caledon Natural Area is mostly mature hardwood forest along the river, which is an important nesting area for bald eagles.  In addition to five bald eagles, I saw a great horned owl, a number of white-tailed deer, osprey, kingfisher, tufted titmice, chickadees, and juncos, among other birds.  Below is the route for my 7.2 mile hike, which was a loop with some out and back portions.  I started and ended at the star, and the red arrows show my travel direction. 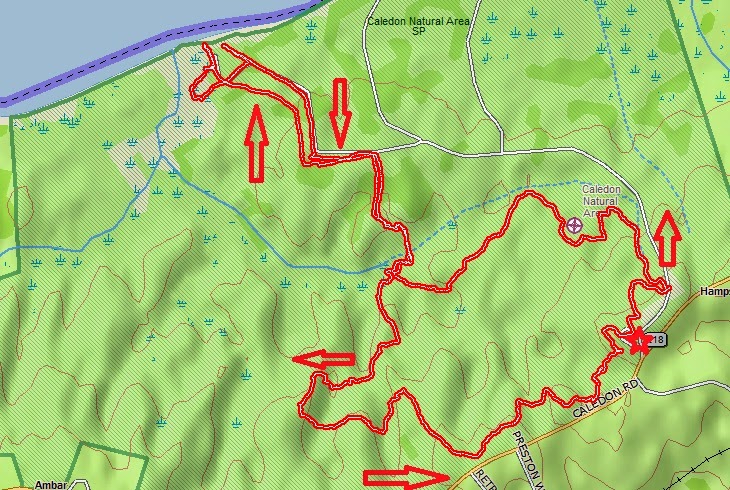 Most of the hike was fairly easy, but there is some terrain, and especially the western most portions had a lot of short and steep uphill and downhill.

I am big fan of taking a topo map on my hikes, especially into the more remote areas.  But the state parks do a great job of marking their trails, and the trail maps that they provide was adequate for my travels yesterday. 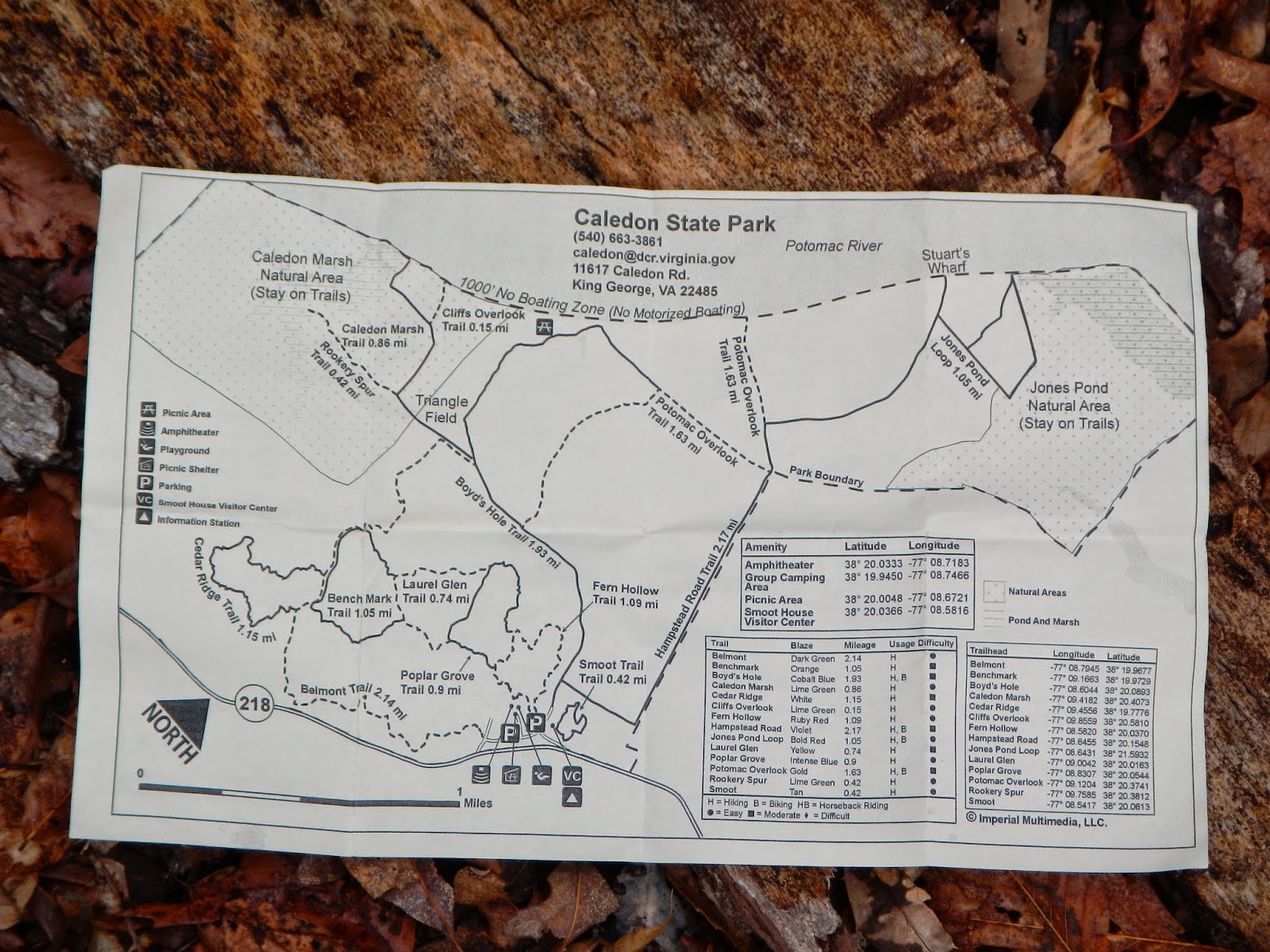 There are a number of streams flowing through the park, heading to the Potomac River and eventually to the Chesapeake Bay.  Soon after I started hiking, it began to rain steadily, and I put my binoculars away. 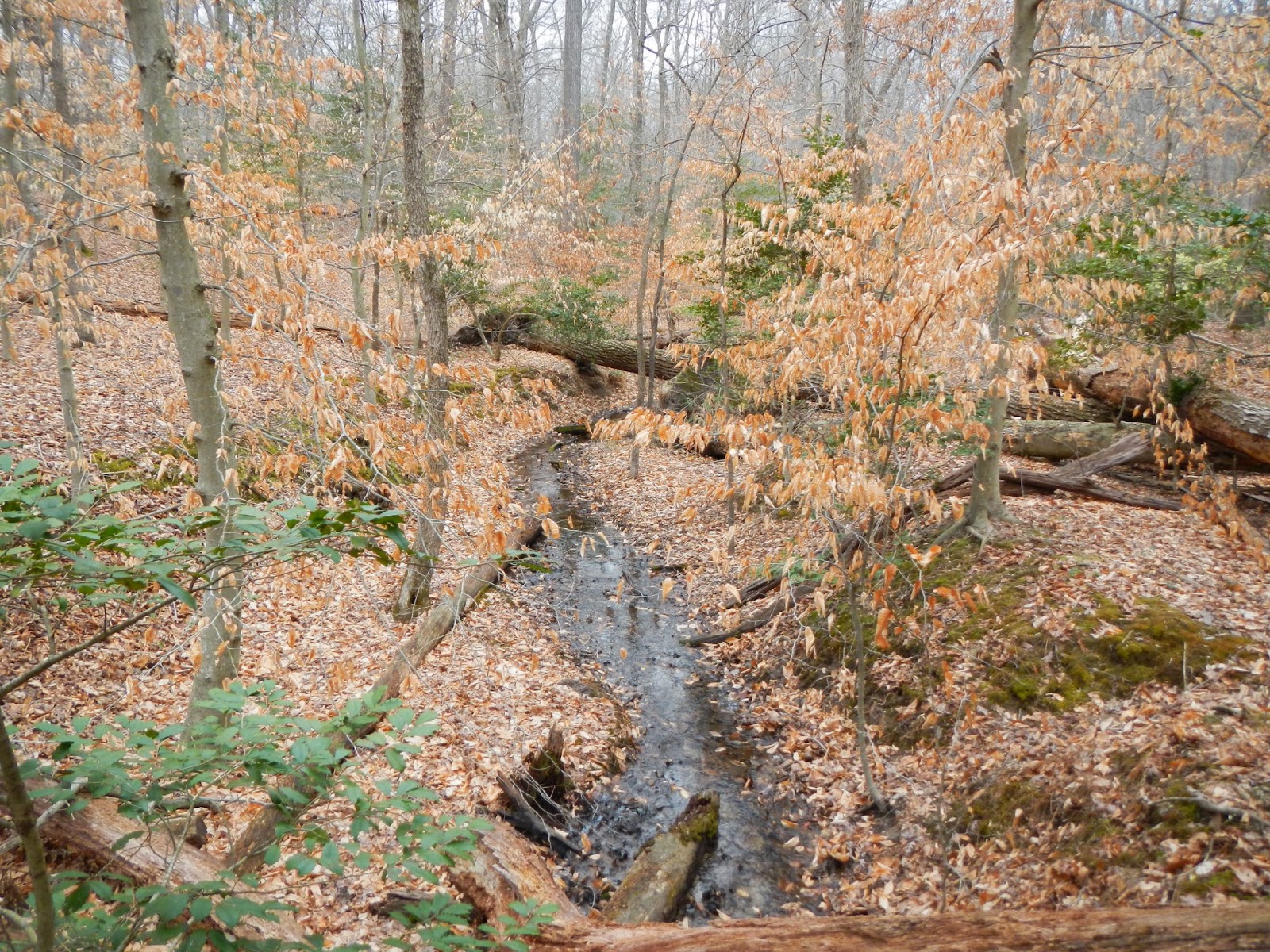 The photo below is very typical of the area, with some terrain and large hardwoods, generally 1-2 feet in diameter, with some much larger trees. 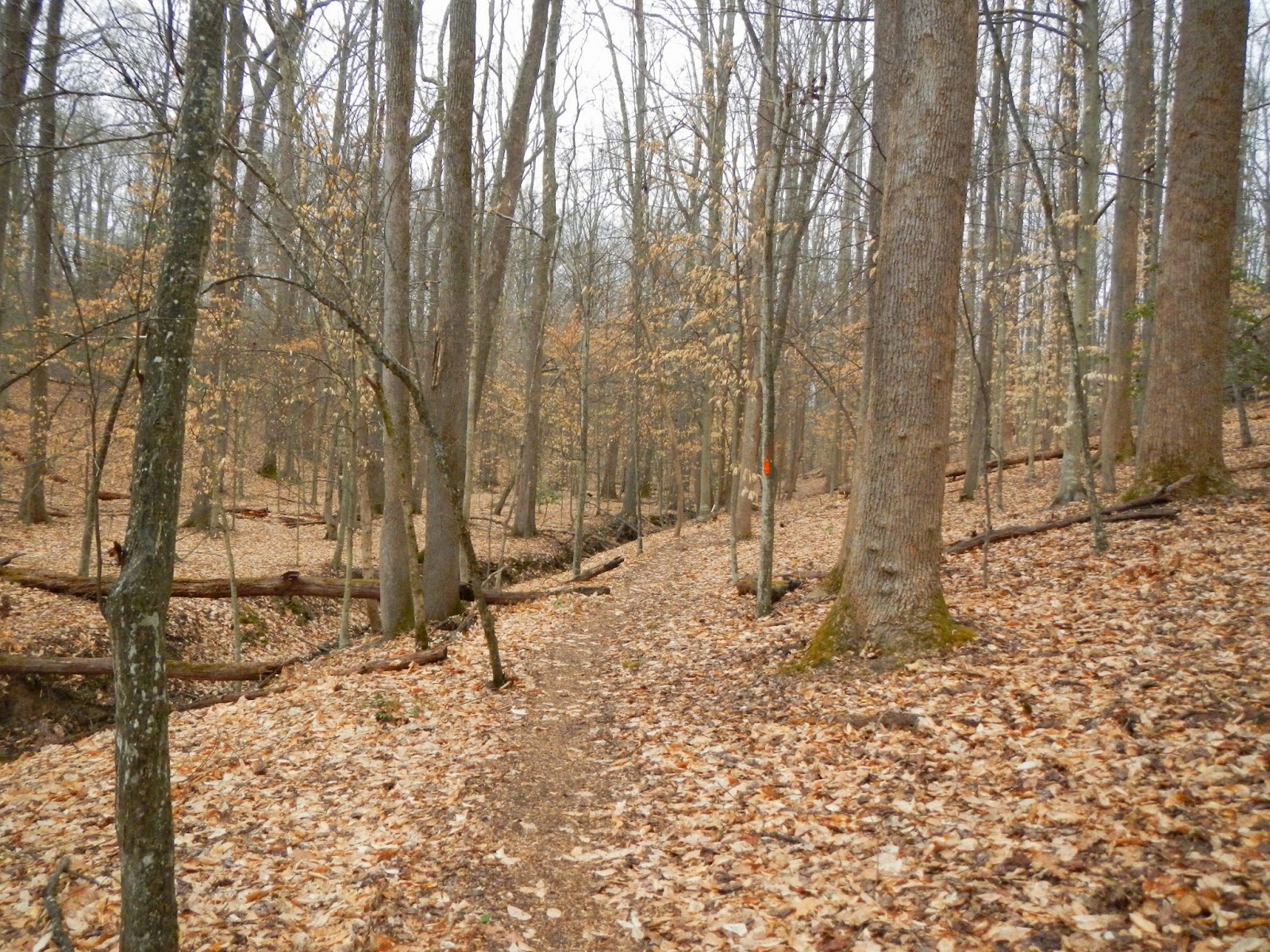 A footbridge crosses the swamp at this point, and this is where I saw the great horned owl.  I dug my binoculars out of my pack in the rain to get a better view.  That was a very cool sighting. 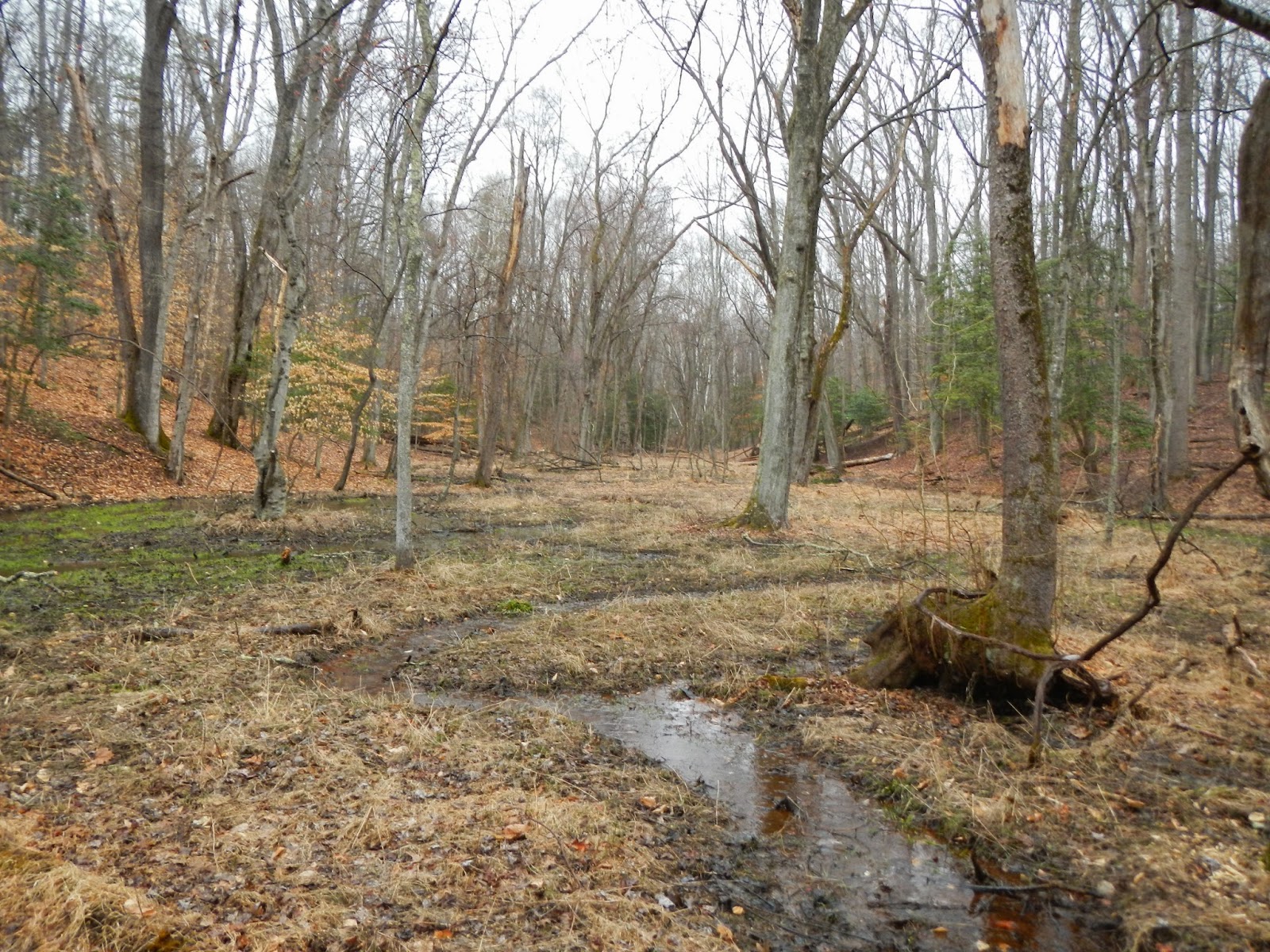 This is Caledon Marsh, on the edge of the river.  It was at this point, about three miles into my hike, that the rain stopped, and the sun even came partially out.  It was just in time for .... 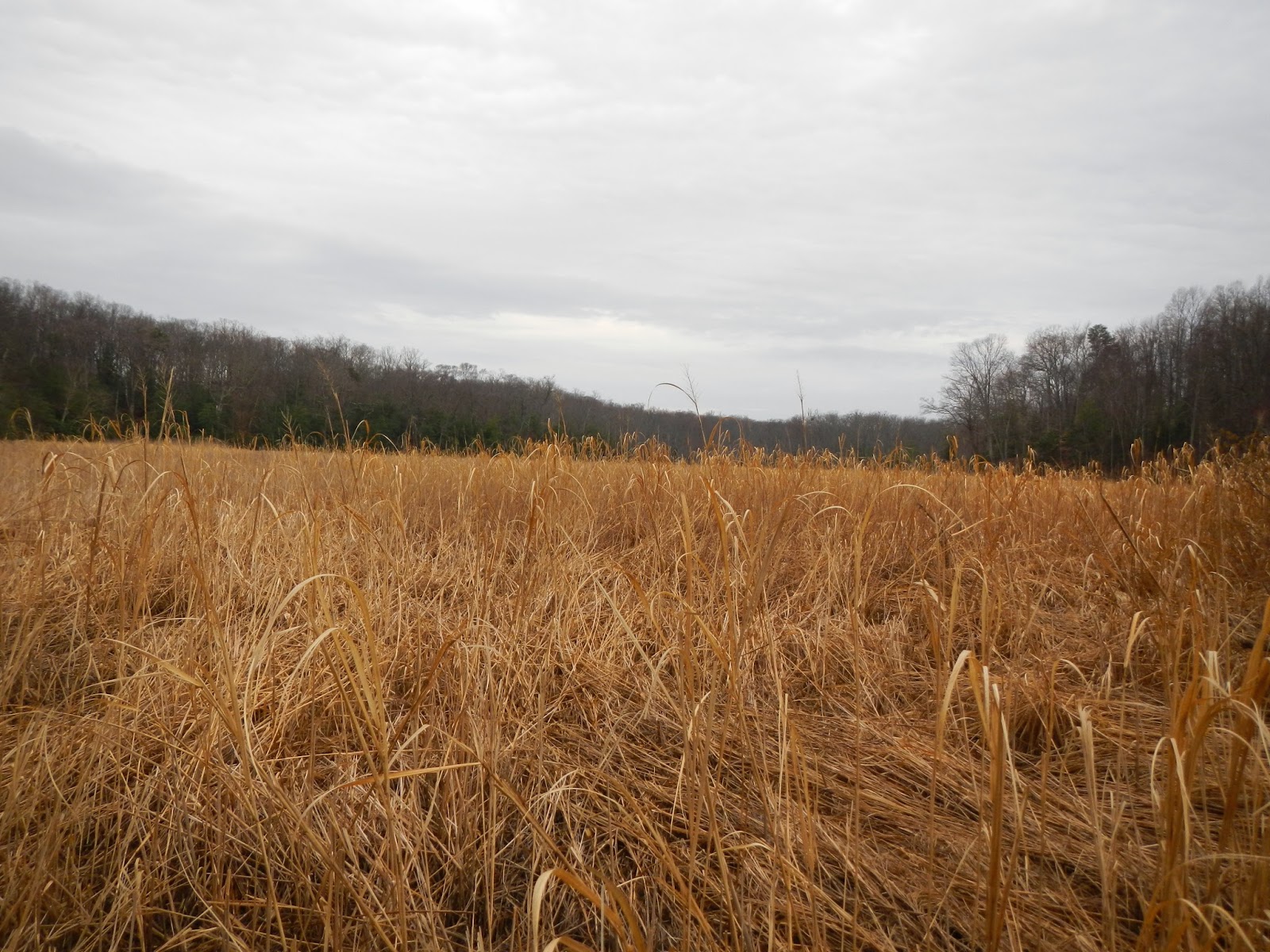 ... lunch by the Potomac River.  It was here that I saw the eagles and the ospreys, as well as the belted kingfisher. 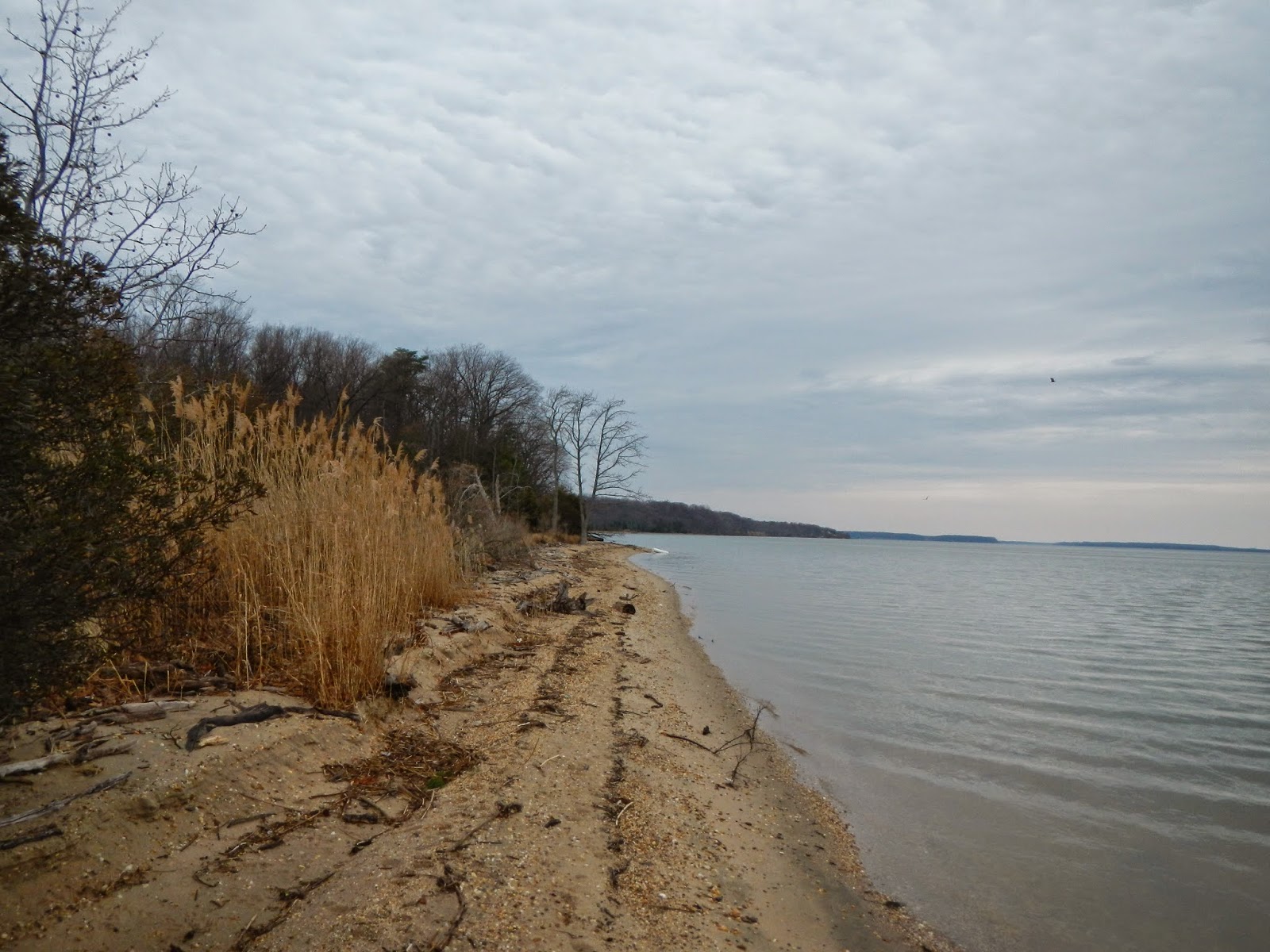 This was the best photo I could get of a bald eagle.  This one was immature, but I saw several others mature ones with their striking white heads. 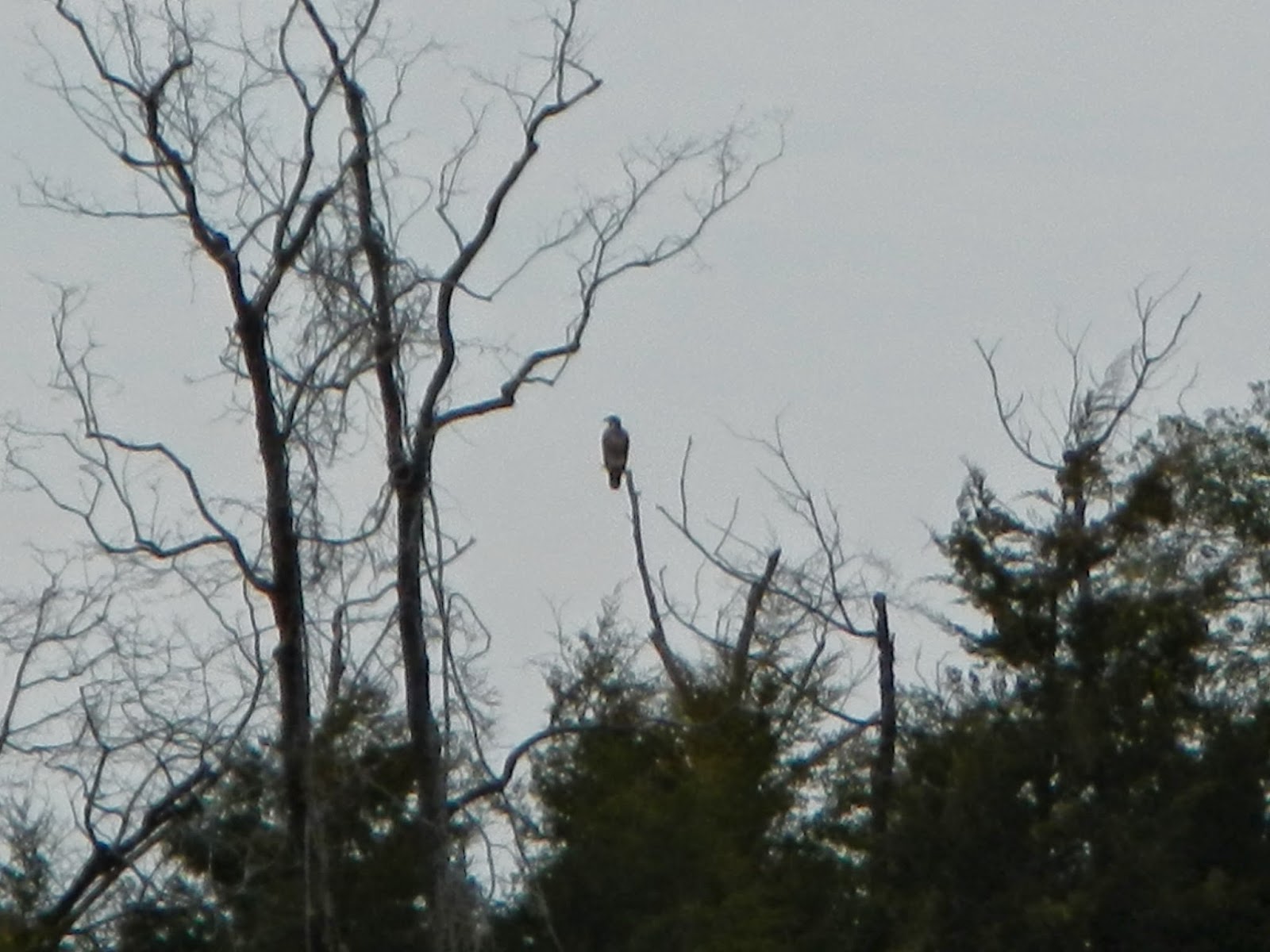 Late in the hike, I came upon this large hollowed-out tree. 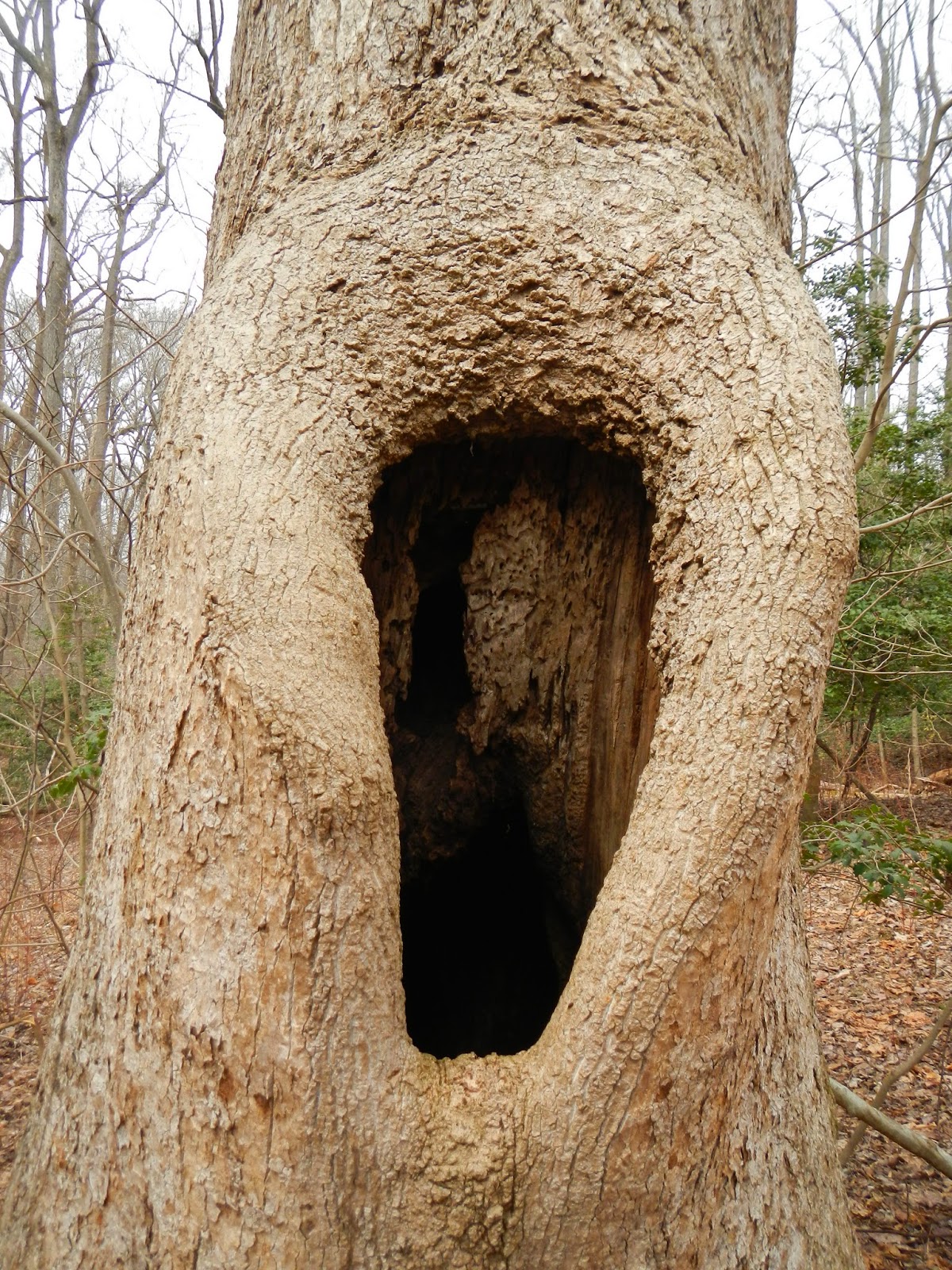 It was hollow all the way to the bottom, and I imagine that animals sometimes den it it. 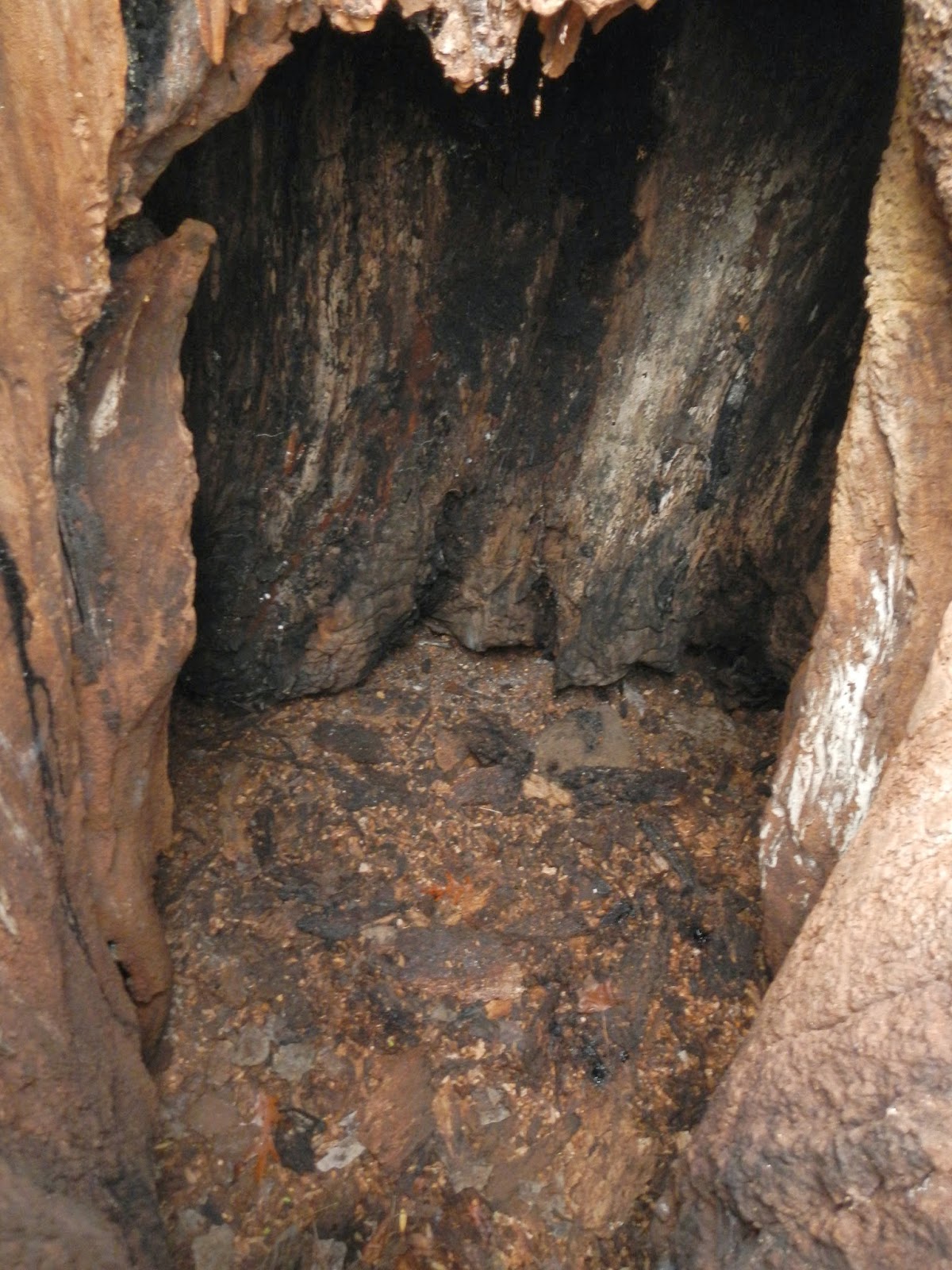 You can see that some of the trees area really large.  I leaned my trekking poles up against this one for a look at the scale. 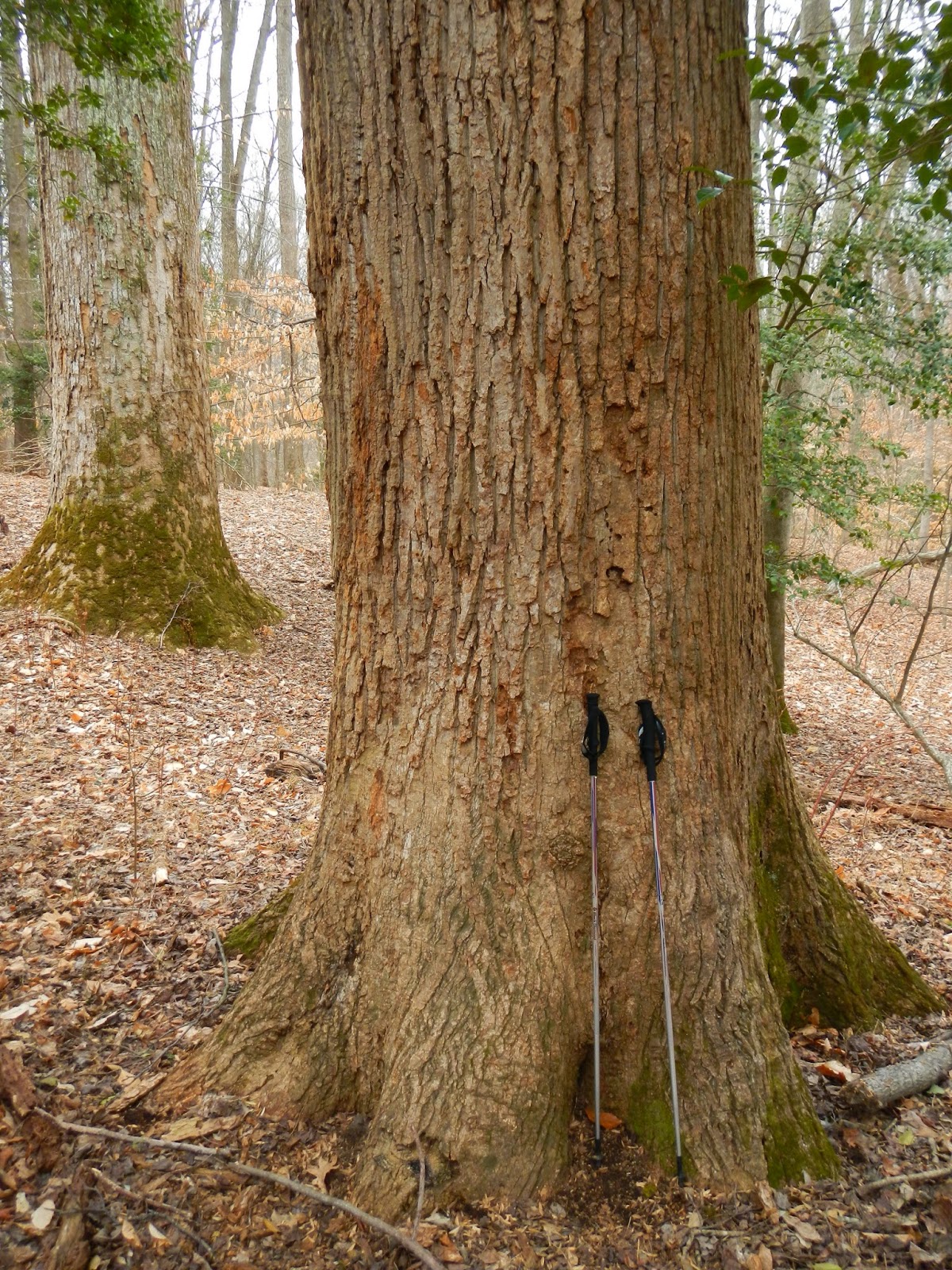 I had a fun day hiking around and exploring the Caledon Natural Area.  It is a fascinating place, and sure beat being at work for the day.
Posted by o2bhiking at 4:29 AM