About a month ago, my hiking buddy Hawkeye suggested a winter hike along the Appalachian Trail from Rockfish Gap south to the first shelter on the trail from that point, the incomparable Paul Wolfe Shelter.  It would be five miles each way in the out and back hike, and we decided to go Sunday, March 2.  Along the way, I asked my friend Doug if he wanted to hike with us.  In the meantime, Hawkeye and I decided to do something a little different for a day hike and cook lunch at the shelter.  Since I am preparing for a short backpacking trip later this month, I wanted to carry some extra weight and brought things I normally wouldn't bring on a day hike, such as my stove, cook kit, and some extra clothing.  I got my total pack weight up to about 25 pounds.  Hawkeye thought that cooking some steak and vegetable packets in the fire would be a great lunch and I agreed, although I made mine heavy on the veggies and light on the steak.

Rockfish Gap is where Interstate 64 crosses the Blue Ridge Mountains.  It is the jumping off point to Shenandoah National Park via the Skyline Drive to the north, and the Blue Ridge Parkway to the south.  It has some history behind it, as the sign below shows.  At one point, this area would have been total wilderness. 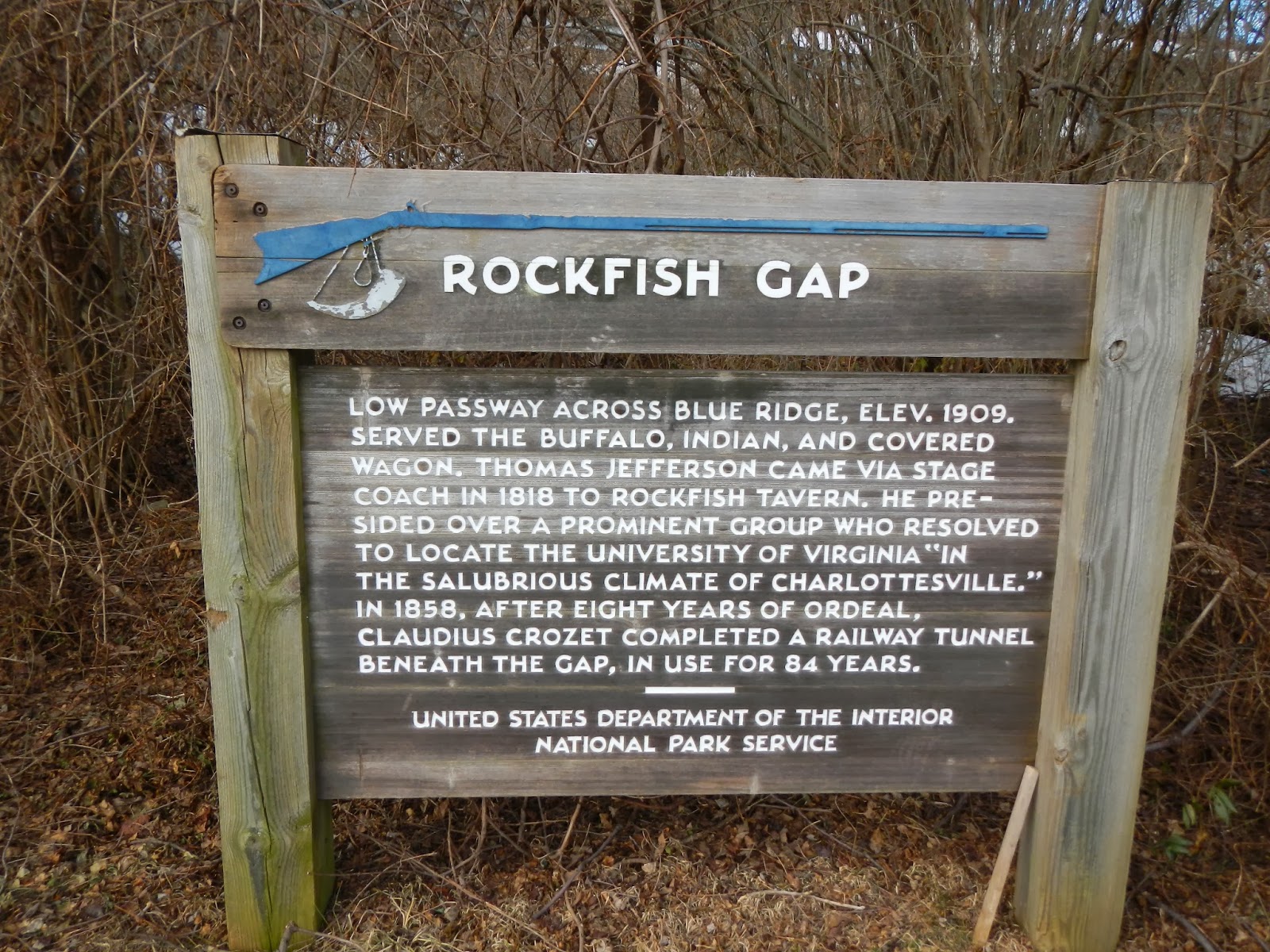 The topo map below shows our route along the Appalachian Trail, started and returning to Rockfish Gap at the north (purple circle) and stopping at the Paul Wolfe Shelter to the south for several hours (purple arrow). 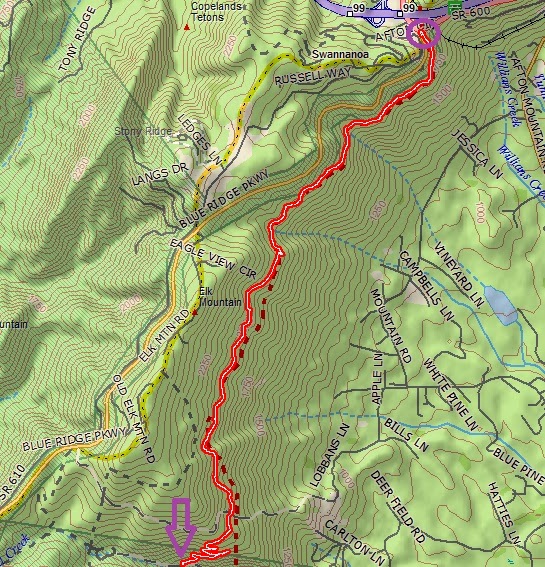 You can see that our route, based on the elevation profile, was typical of the Appalachian Mountains, with lots of ups and downs interspersed with some fairly level ridge lines.  The profile below is one way to the shelter.  I didn't record it on the way back, as it would have just been a mirror image of the five miles in.  The total elevation loss and gain for the whole trip would have been about 2,800 feet gained and 2,800 feet lost.  There was more downhill than uphill on the way in.

So we got to the trail head around 9AM and started hiking.  It was chilly at the time, and I started out with three layers, including a fleece.  Within 20 minutes, I stripped the fleece off and continued in a short sleeve wool shirt and a long sleeve wool shirt.  It was not long until I was in just the short sleeve shirt as the morning warmed rapidly.  It felt great!  And even lounging around the shelter, I only needed the one shirt for most of the time.

The photo below is typical of the woods we walked through - naked hardwoods.  The trail is very well maintained by the Old Dominion Appalachian Trail Club, which I need to rejoin. 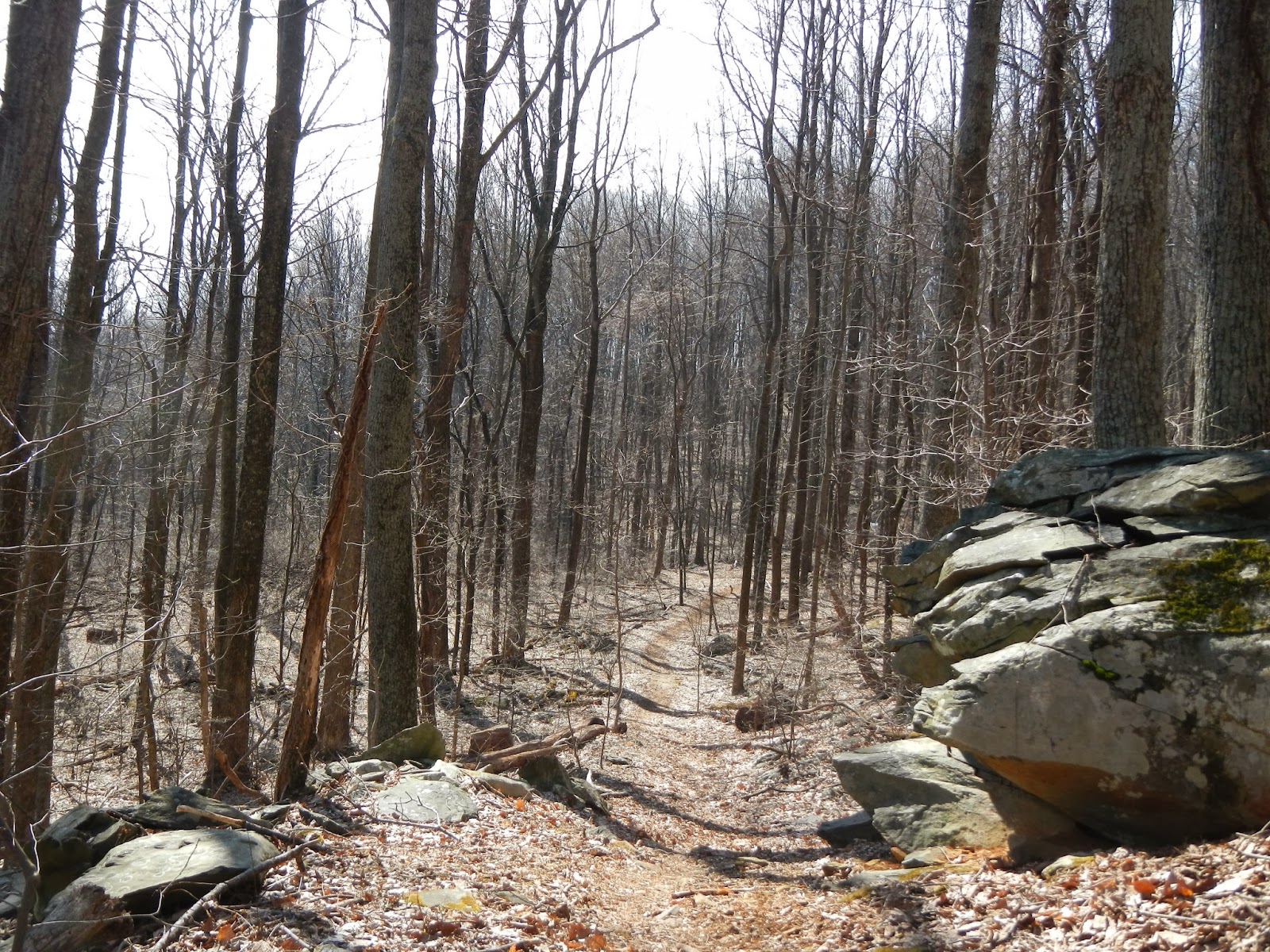 Although there wasn't much snow in the woods, there were patches of ice in the creeks, of which we crossed at least four. 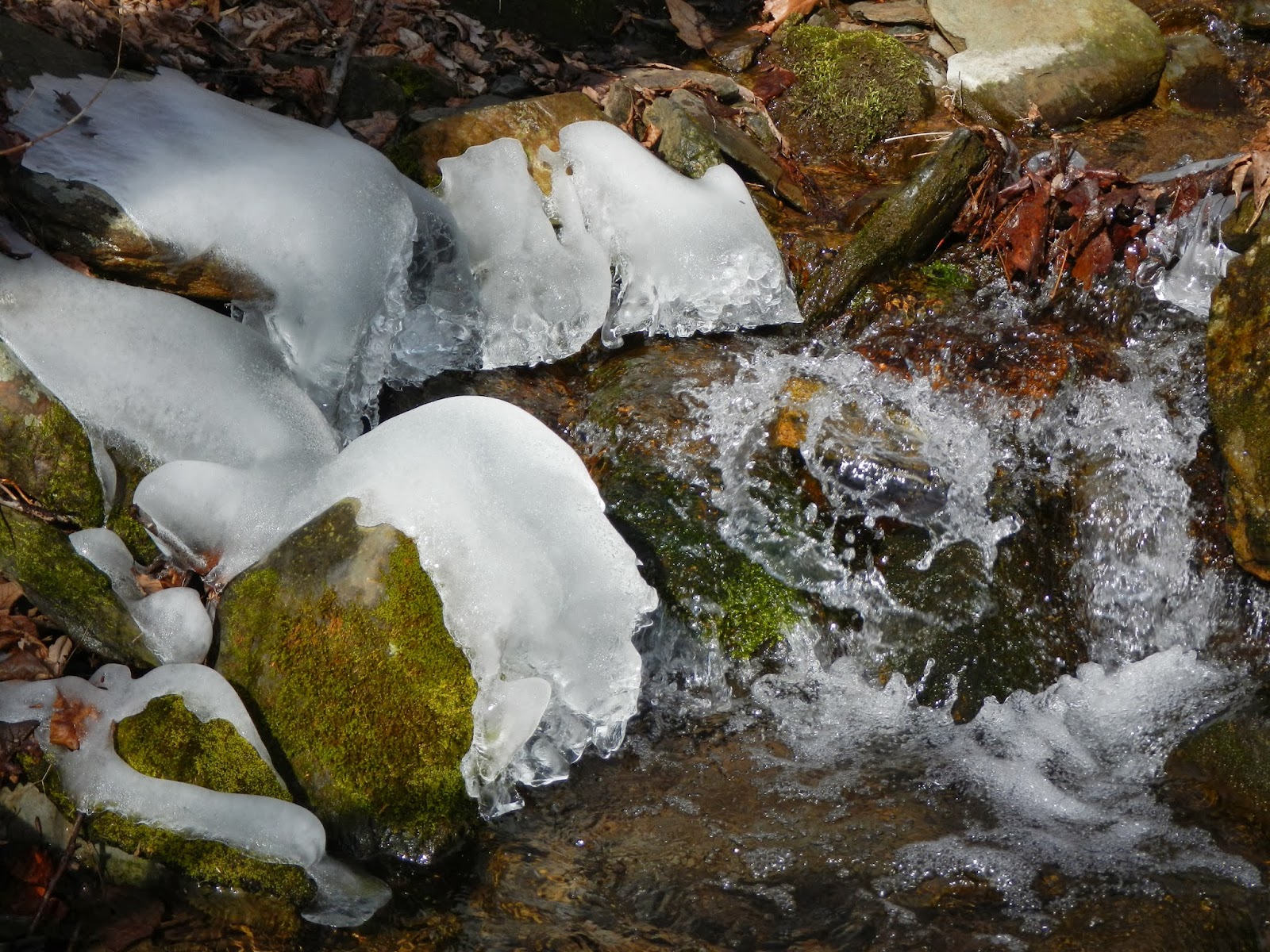 I liked the combination of whitewater and green moss in this small riffle. 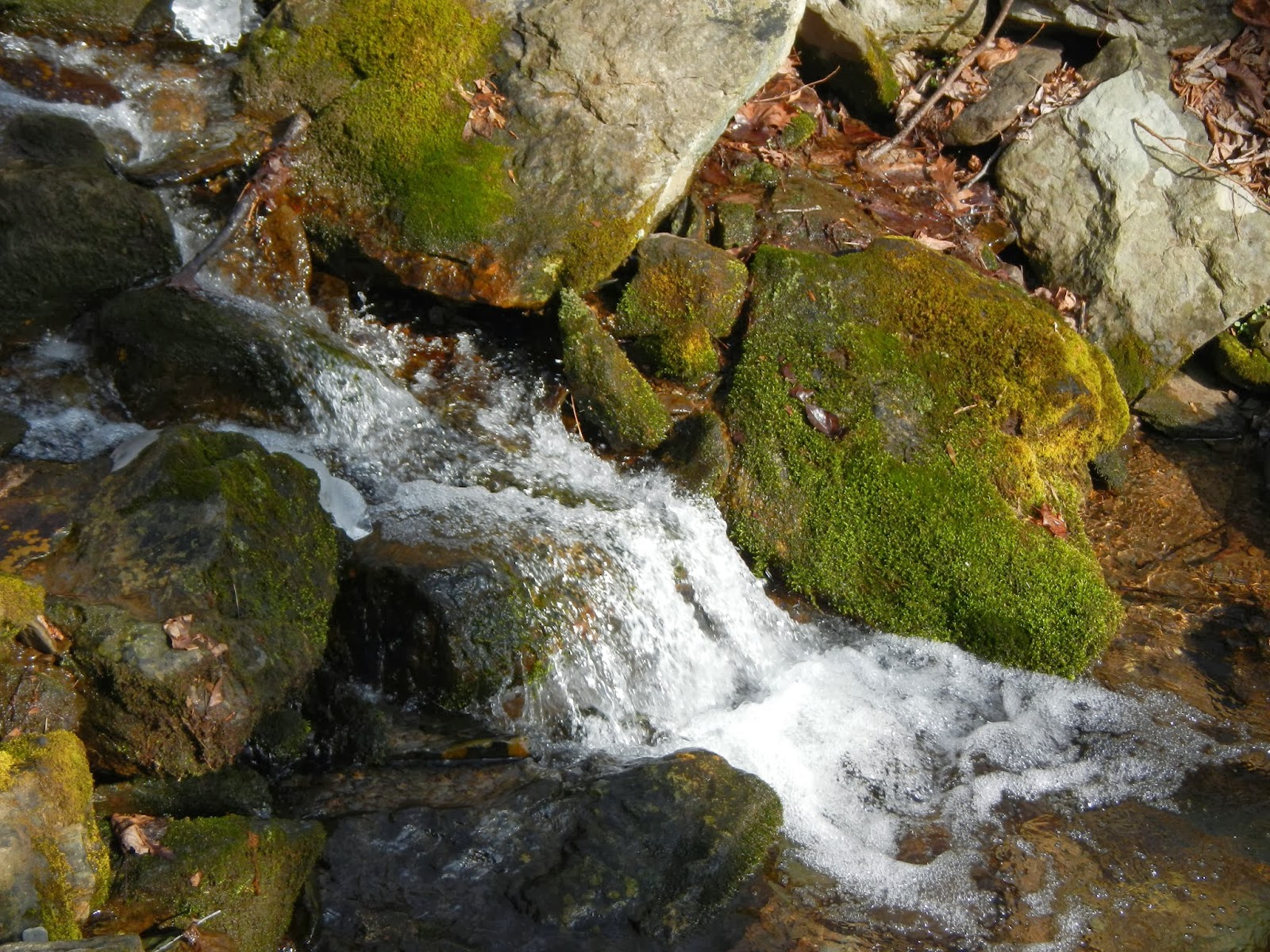 Hawkeye and Doug hike along the Appalachian Trail.  Somewhere down in Georgia and North Carolina at this exact time, through-hikers are slowly making their way north. 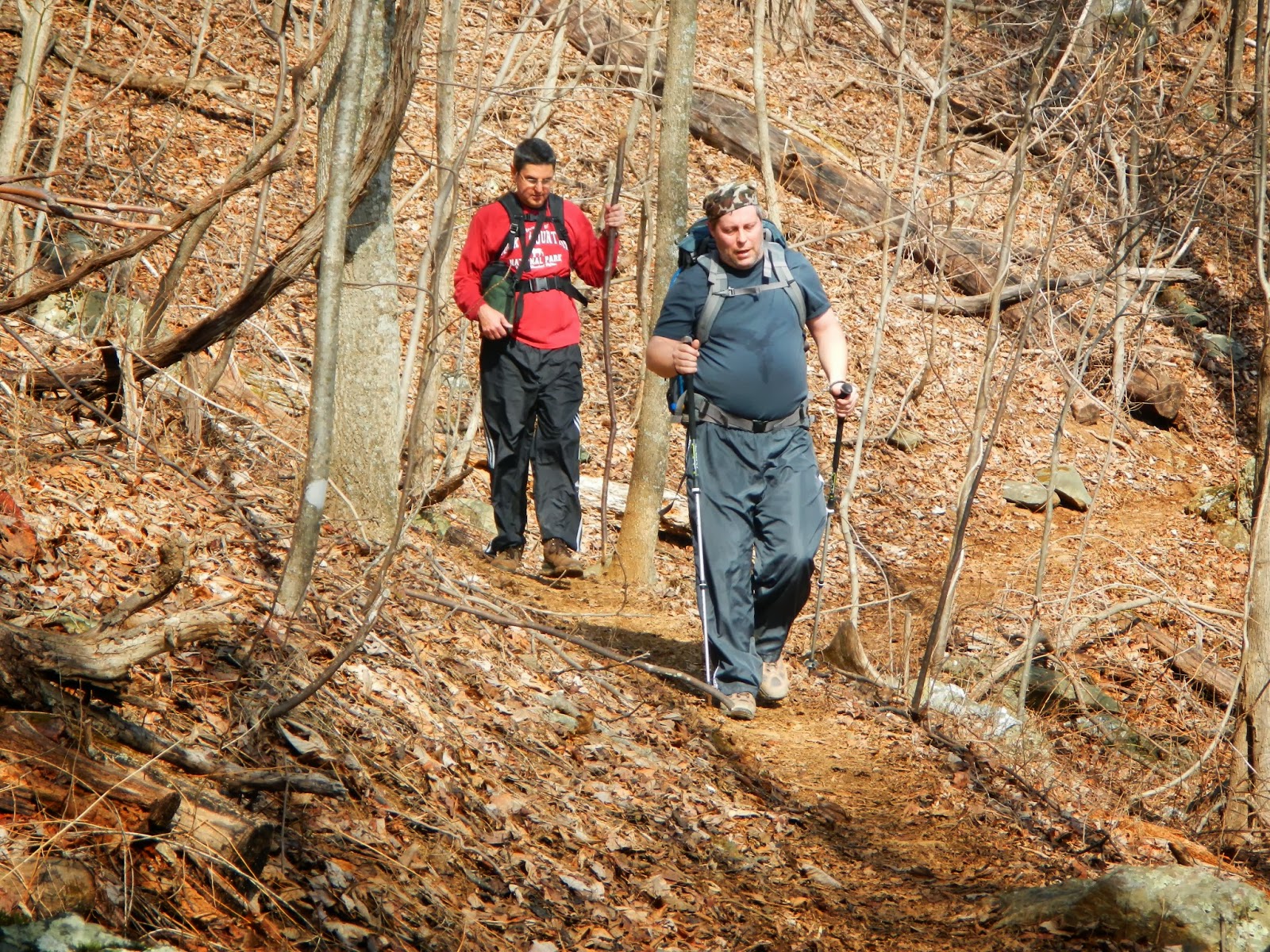 After five miles of walking, we reached the Paul Wolfe Shelter, the nicest three sided back country shelter I ever remember seeing.  It even has a covered porch. 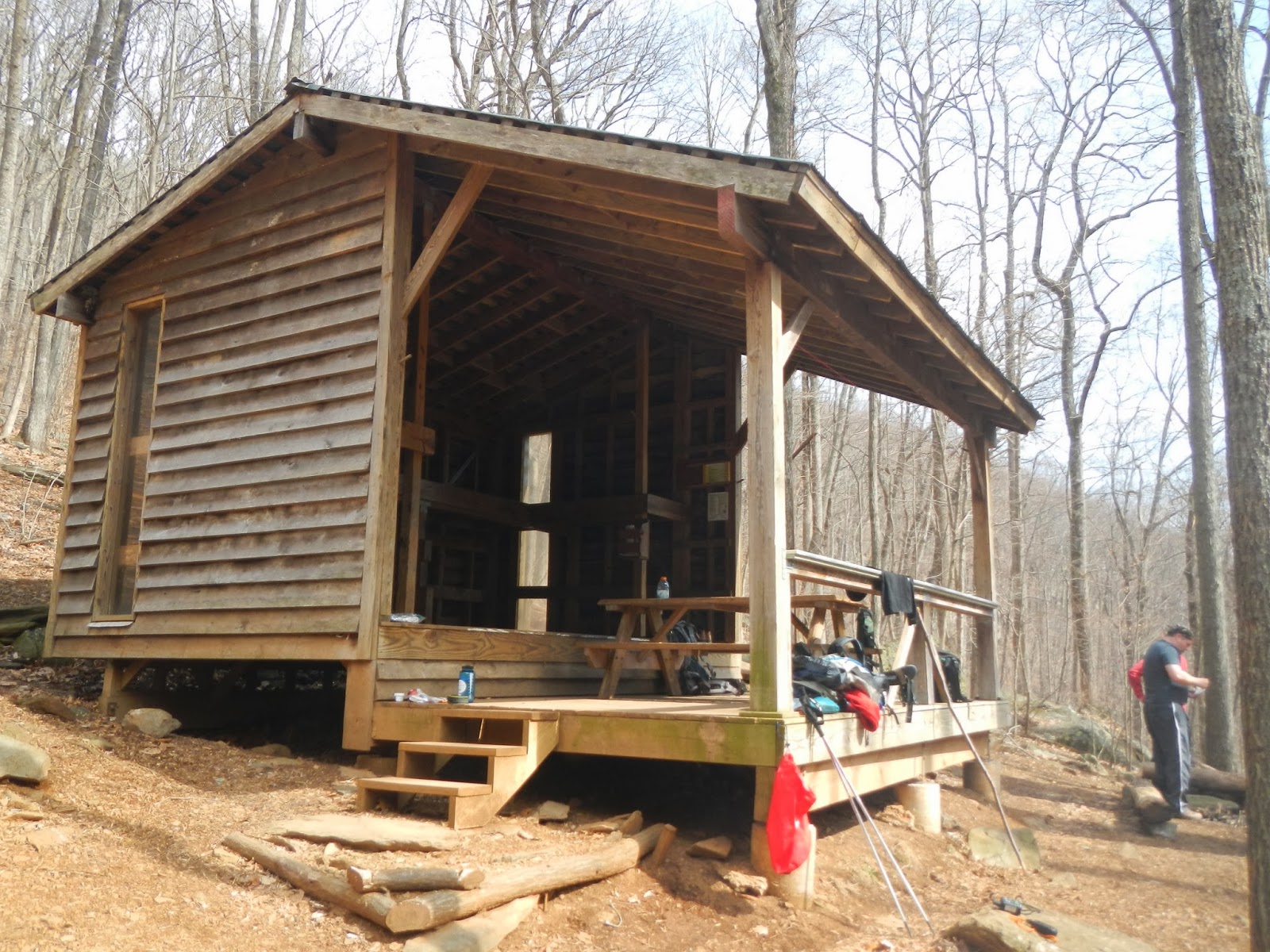 Our first order of business was to build a fire.  We collected, with relative ease, a lot of dry sticks from fallen branches.  We wanted a small, hot fire.  We collected dry twigs much less than pencil diameter, a bunch of twigs about at thick as a pencil, many finger sized twigs, and ended with small branches maybe 50% again as thick as a finger.  We collected some dry tinder, and got the fire going without a match by using my emergency fire starter flint.  I had never tried it before, and it worked like a charm.  See the smoke and the tiny flame on the right? 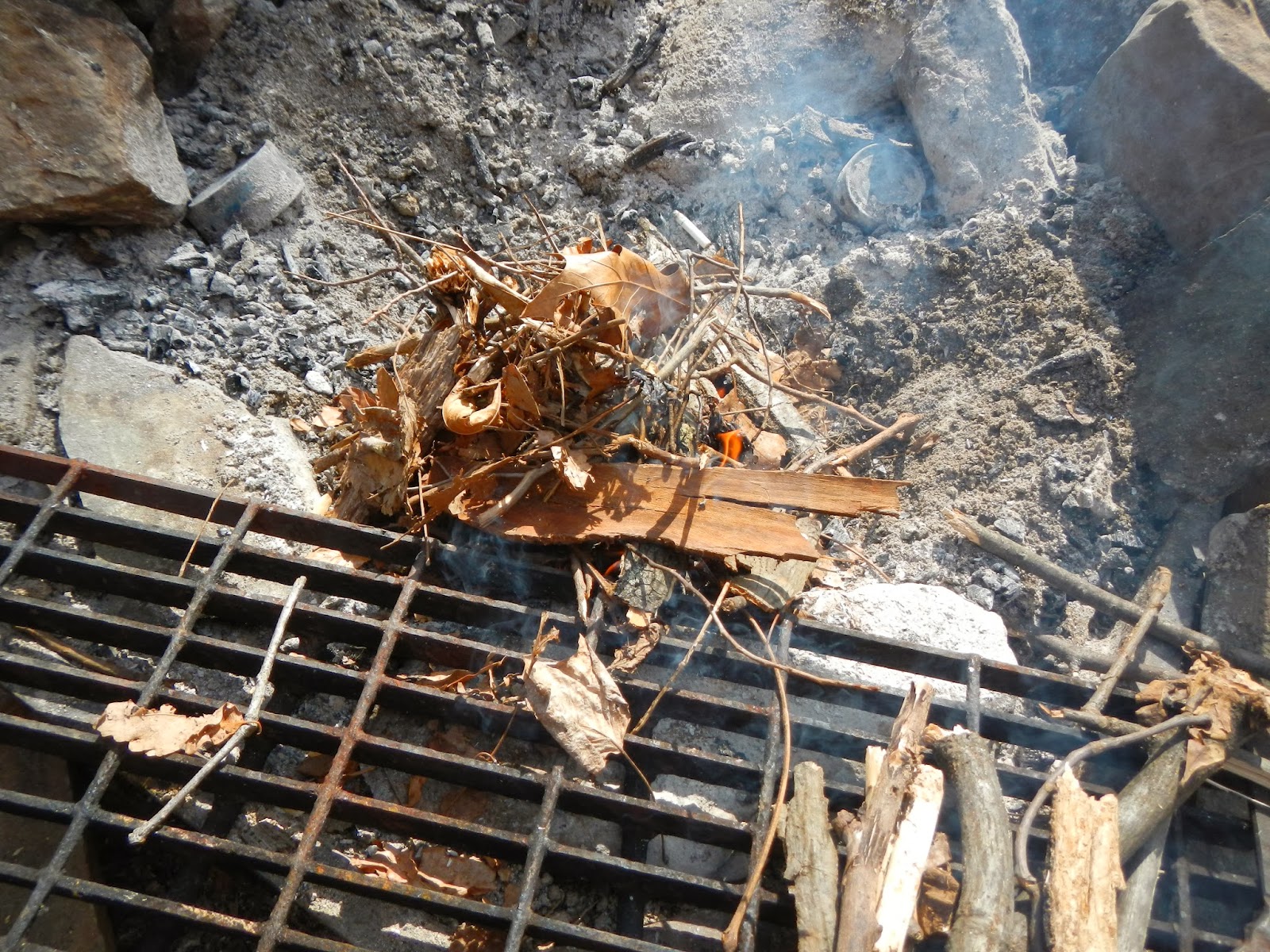 In minutes, we had a nice fire going among all the small branch pieces, and took time to explore a lot.  Very close to the shelter is a memorial bench to John Donovan, a long time member of the Old Dominion Appalachian Trail Club, who put this bench in this spot to honor John's memory. 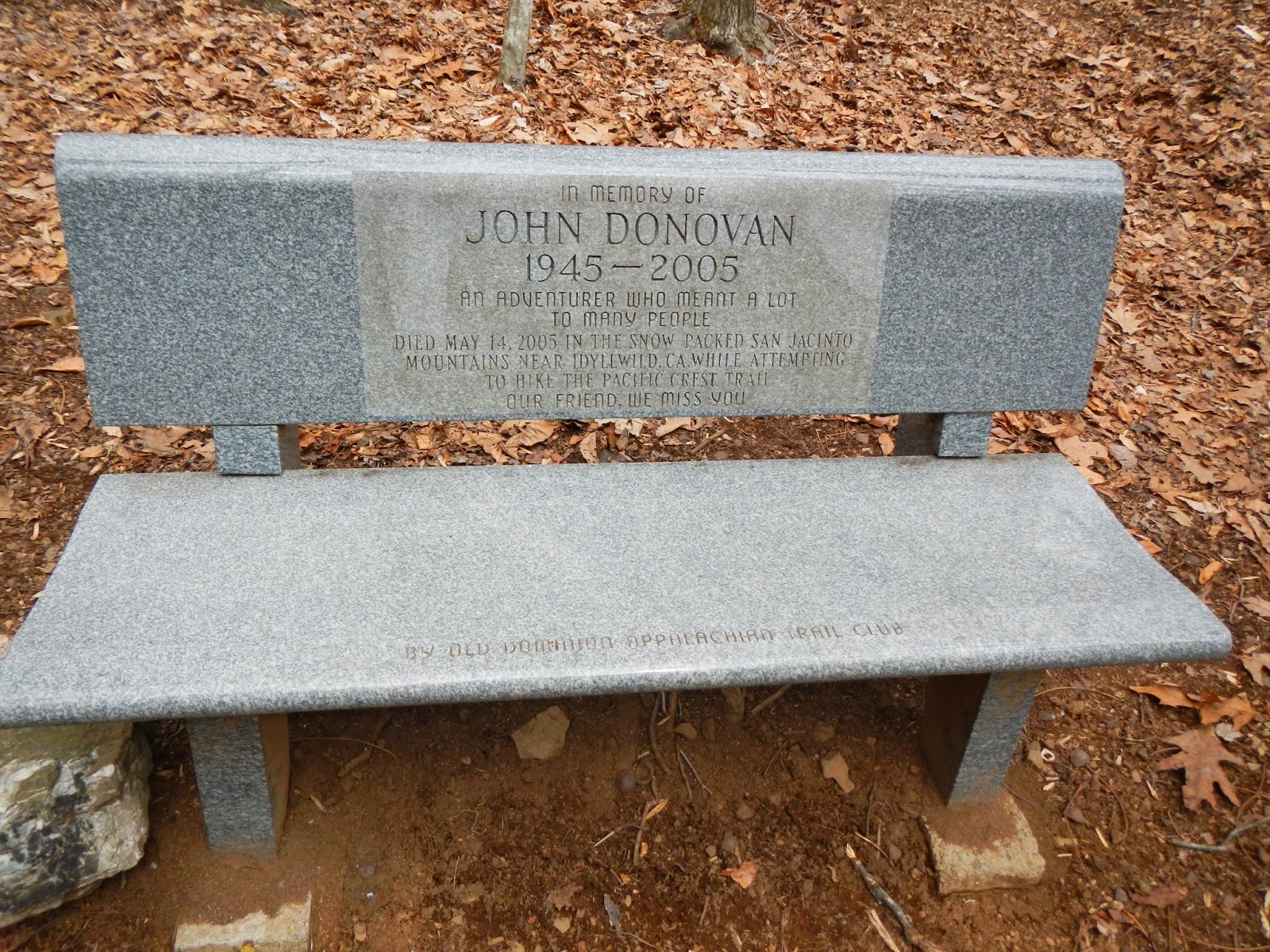 John unfortunately died on the Pacific Crest Trail all alone in 2005, just days after his 60th birthday.  I wrote about it here. 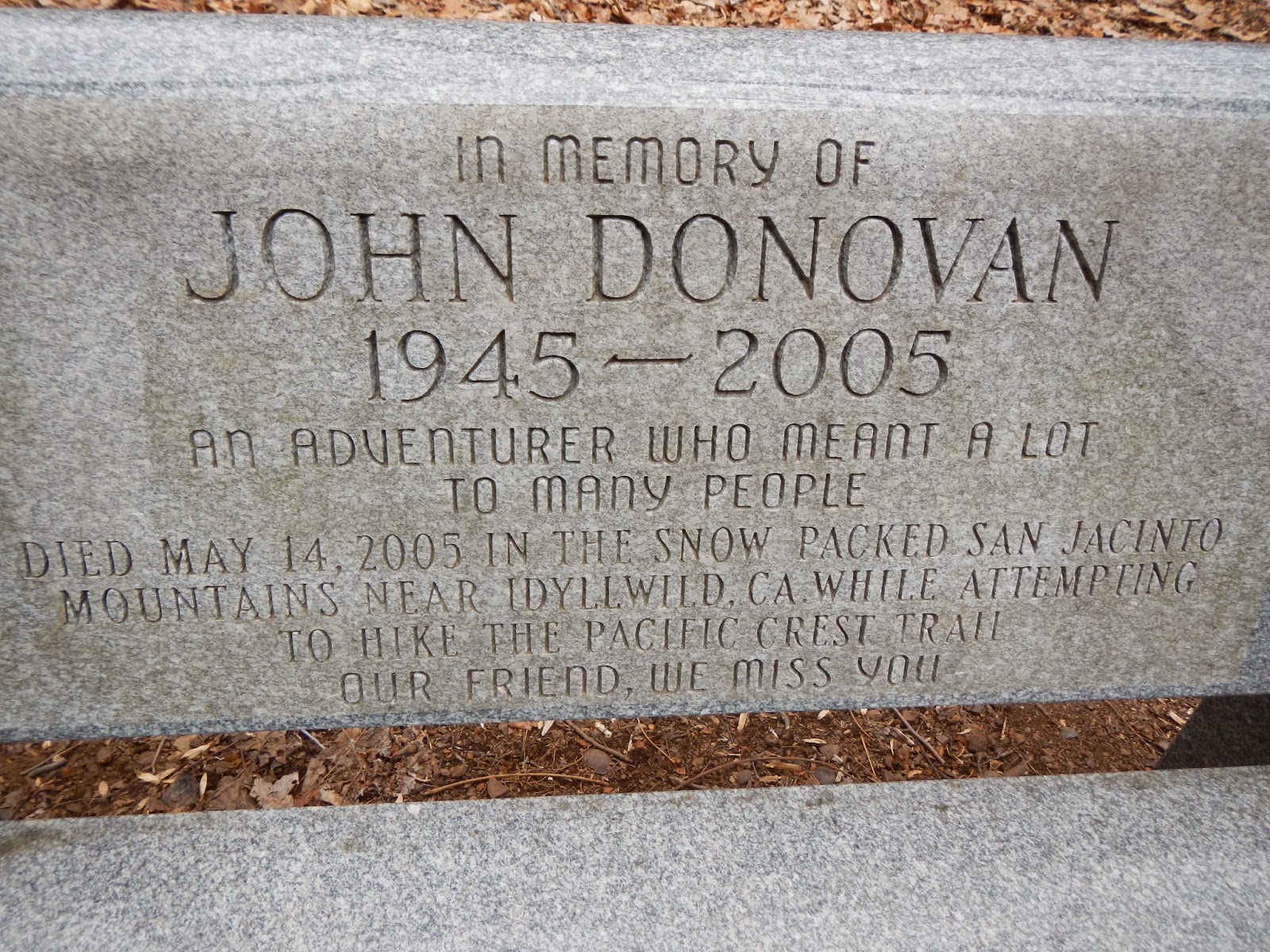 What a lovely spot for this bench, the brook babbling as it flows inexorably towards the Chesapeake Bay hundreds of miles away. 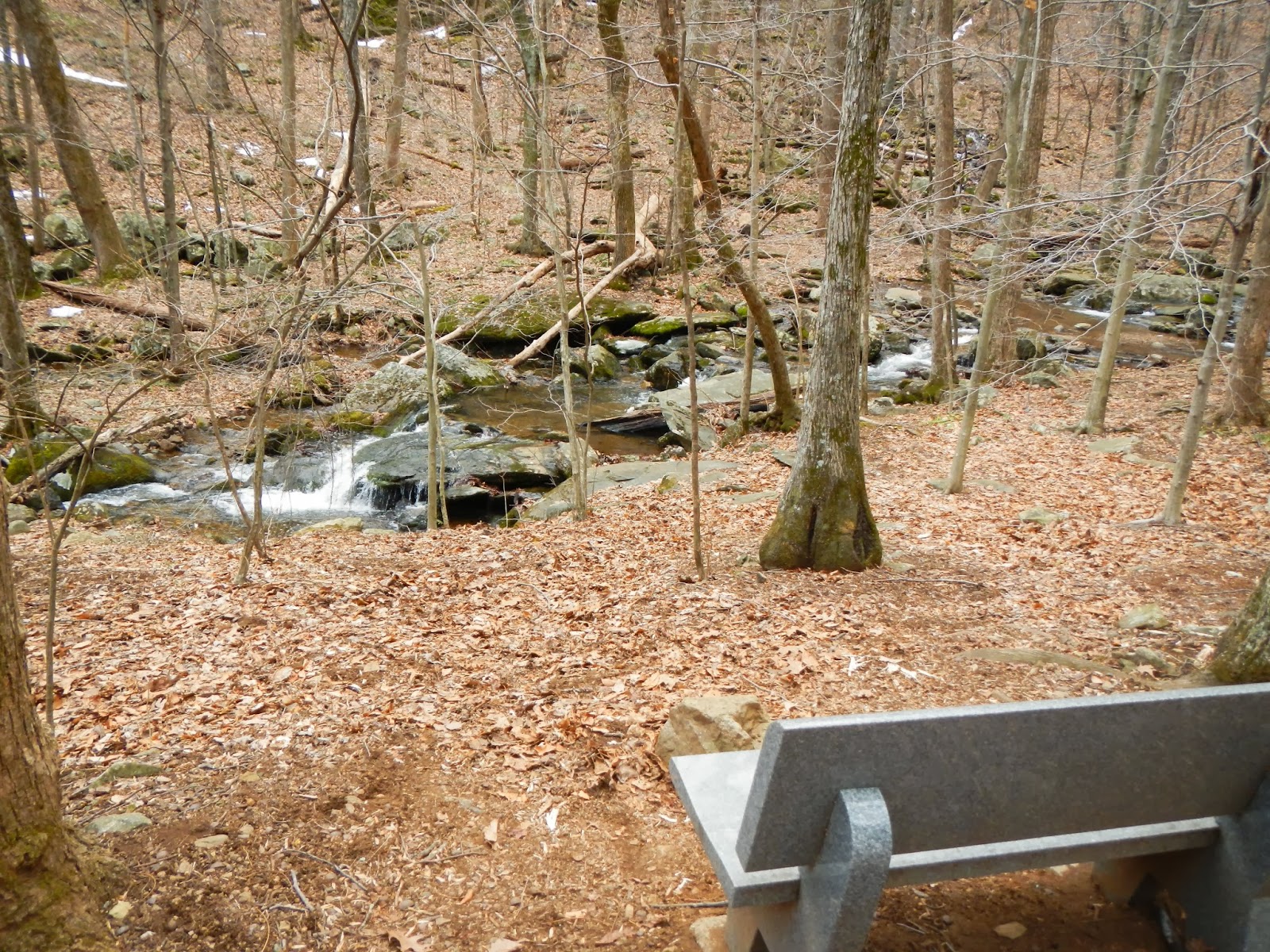 Here is John's memorial bench, with the shelter about 100 or so feet away. 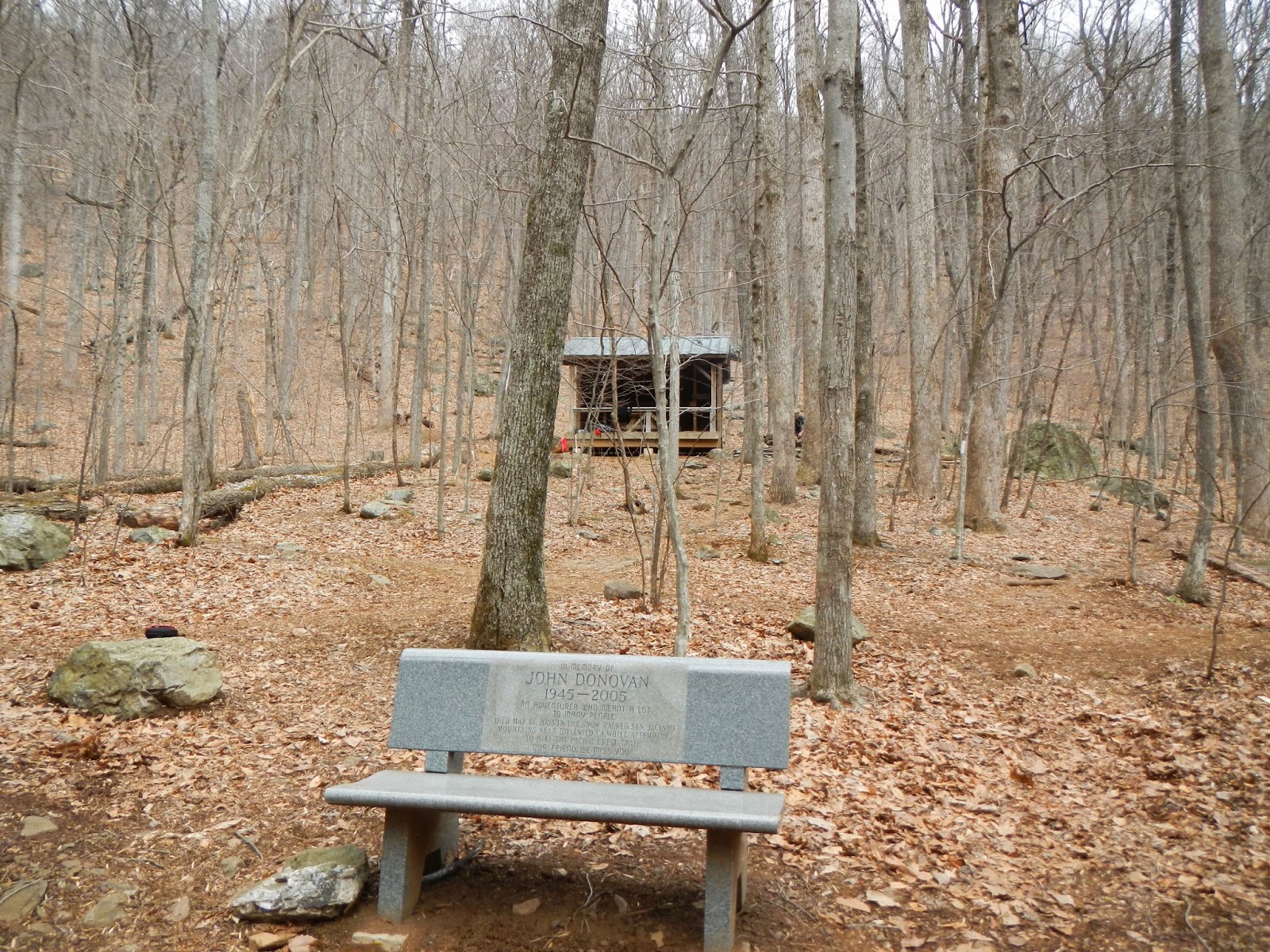 Did you ever camp at a back country shelter with a covered porch and a picnic table on the porch?  Talk about deluxe!  Not too long ago, some idiots built a fire on the porch and ruined it, but the ODATC has since rebuilt it. 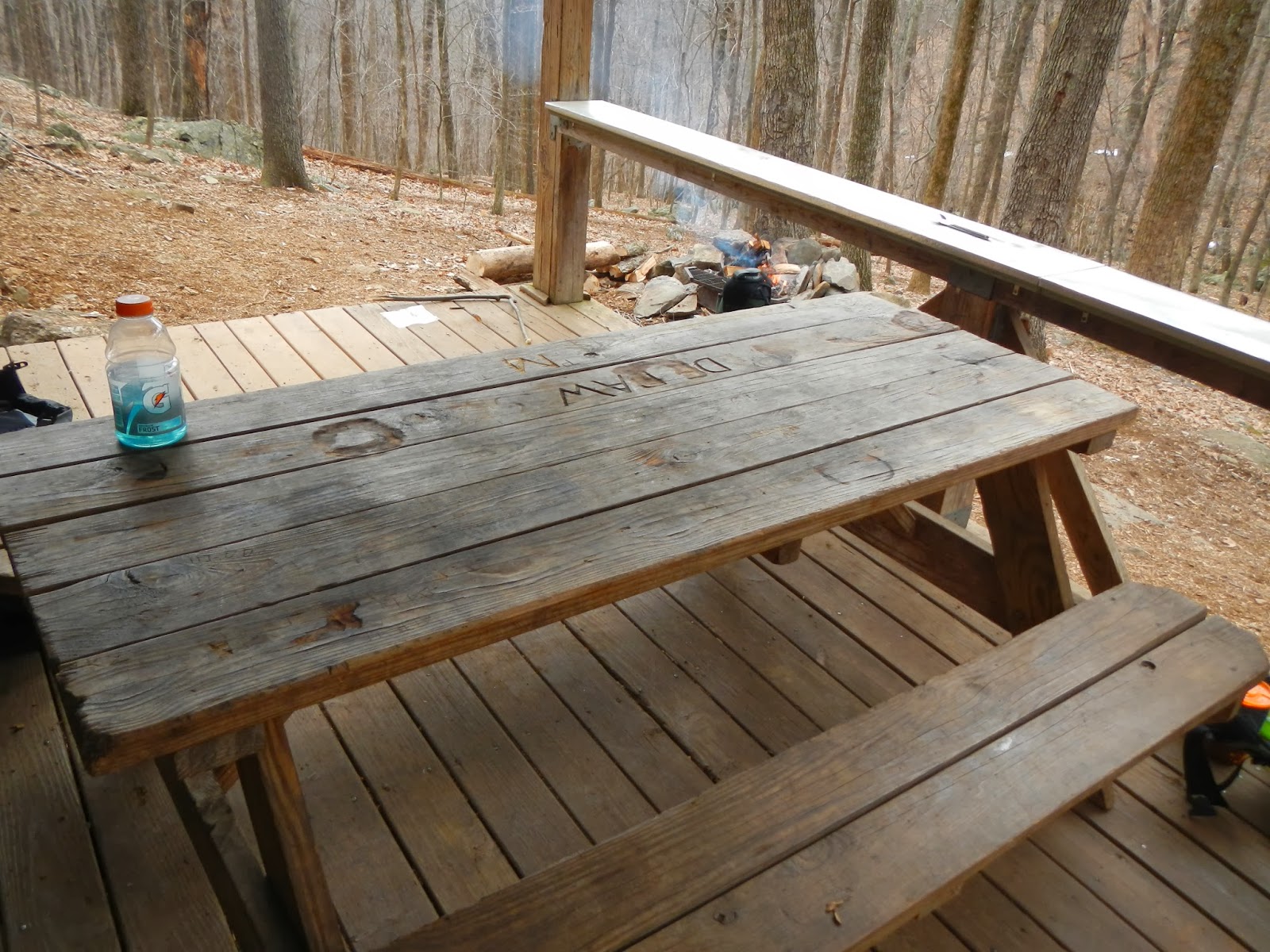 The shelter even has "bunk beds" with an upper level for tired hikers! 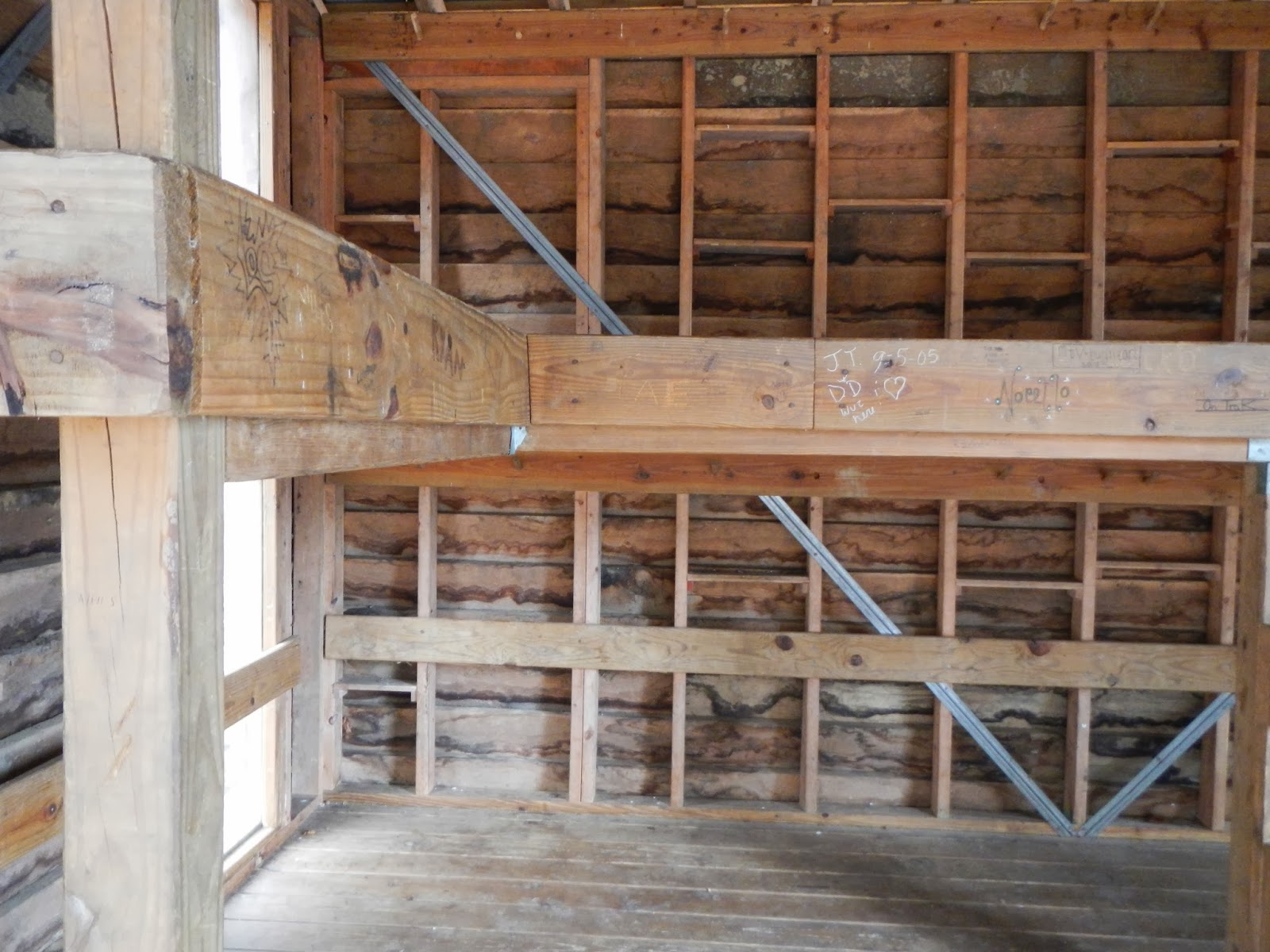 We relaxed and talked for a while, using my stove to boil water for tea and coffee.  What a luxury on a day hike!  I also made some hot chocolate later.  Hawkeye and I put our meal packets directly on the hot coals and then burnt some leaves and forest junk on top to cover them with hot ashes.  Doug cooked his on the grill. 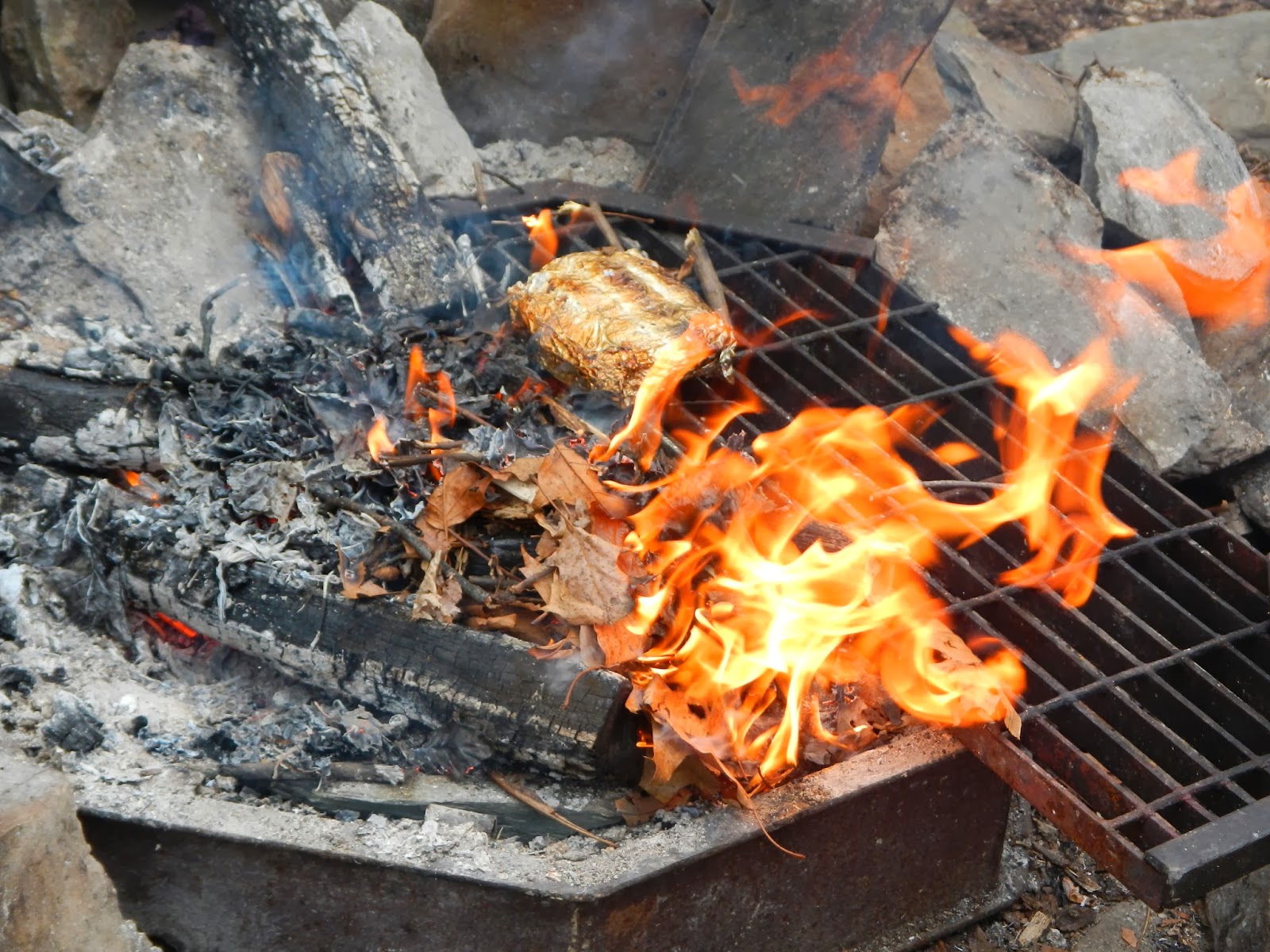 Here is Doug, about to tuck into his lunch. 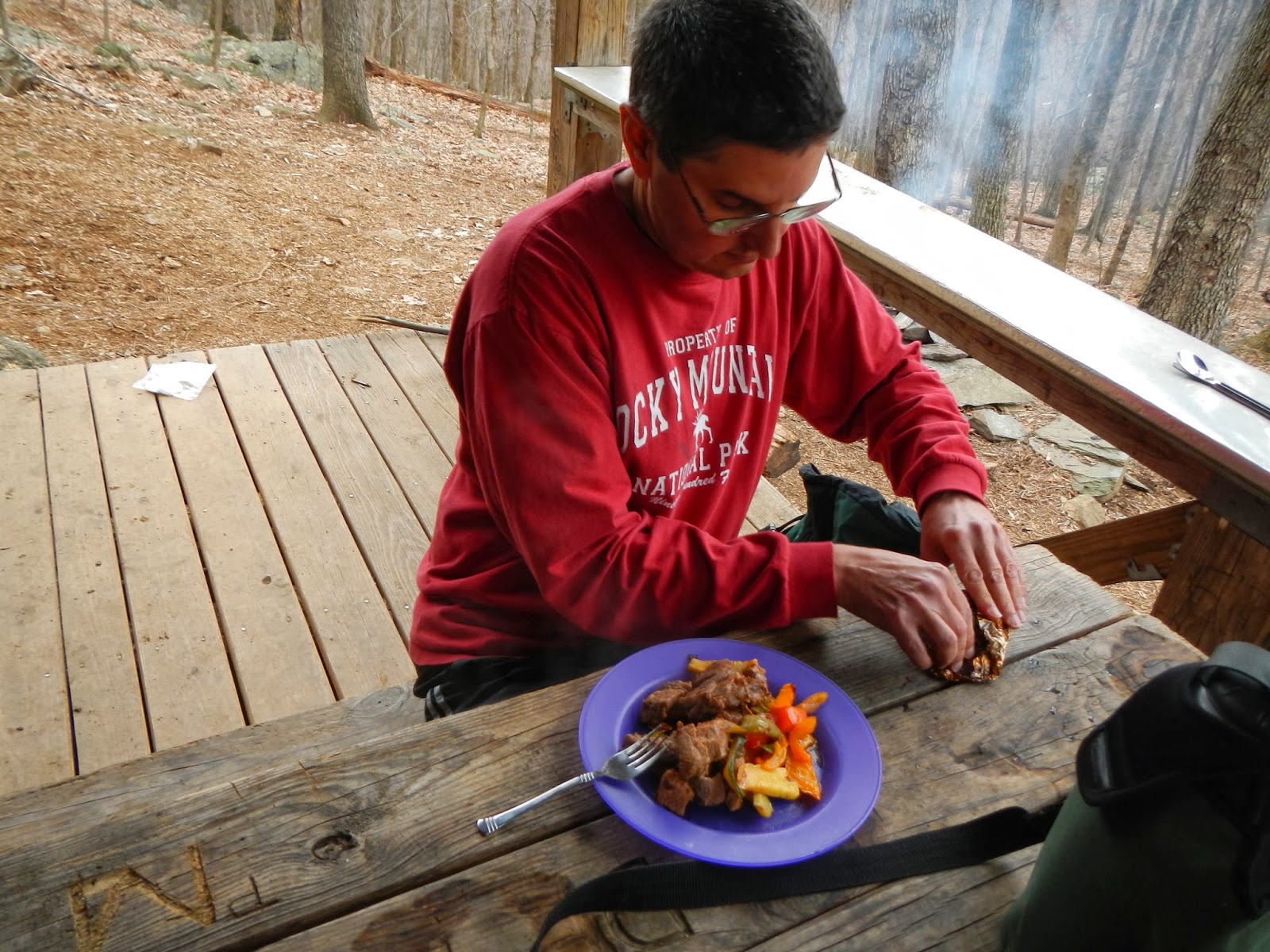 And here is my lunch - potato, tomato, red pepper, carrot, and onion (from Hawkeye) with a small piece of steak.  It was delicious, if I do say so.  Hawkeye and I agreed it was the best day hiking lunch either of us could remember! 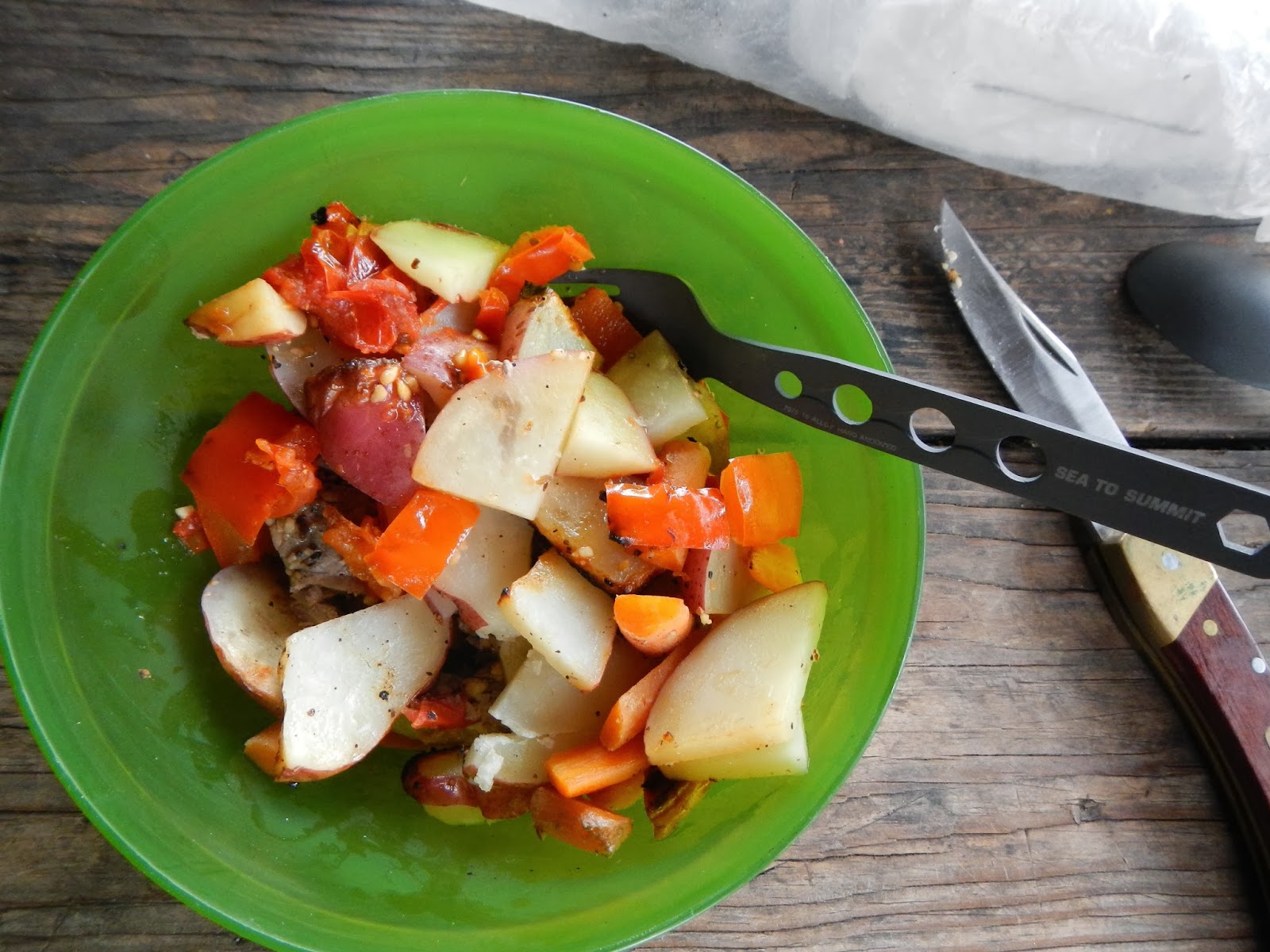 By around 1:30 it was getting cloudy, and by 2PM, we decided to pack up and leave.  We drowned the campfire and stirred the cold ashes and hit the trail.  At exactly that moment, it started to rain, and the rain increased in intensity for the entire hike out.  The trail turned muddy and sloppy, the rain soaked through my jacket - yeah, definitely time to replace it - and the temperature began to drop.  What had a been a beautiful spring-like sunny day with highs near 70 would, in less than a couple of hours be a steady rain, and about 17 hours after that back in Richmond would be temperatures in the 20's and a steady snowfall.

When we got back to the car, all fairly soaked, I had to admit that I was glad not to be camping out that night.  Instead of crawling with wet skin into a sleeping bag in a tiny tent as the temperature dropped and the snow began, I would be able to get a hot shower and sleep in a warm bed.  But the rain could not lessen the fun we all had on the hike to the Paul Wolfe Shelter!
Posted by o2bhiking at 2:56 PM