On Tuesday's hike into Cape May Point State Park, I encountered this creature on the trails.  Usually, animals tend to flee when they see a human.  Not this guy!  He actually approached me as I hiked through an open forested area.  Figure out what it is!

Of type of creature, I'm a fowl
I'm larger than a hawk or owl

Berries, insects, nuts, fruits, and more -
It's clear that I'm an omnivore

Whate're I find, that I'll gobble
From this and that, meals I'll cobble

As birds here go, I am quite tall,
The height of children, if they're small

I have no hair but have a beard
Now, don't you think that's sort of weird?

A bourbon is named after me
Distilled in bluegrass Kentuck-ee

I could grace your Thanksgiving table.
(I'll skip that fate if I am able)

In spring of year, I strut my stuff
For hens to claim; of clues - enough!

That's it
for
clues,
so scroll
D
O
W
N
to reveal
the identity
of this
bird.


Is the picture no more murky?
It should be clear I'm wild turkey!

I reached a section of the trail where there was a wooden rail fence to the left, and a fence gate ahead, blocking a gravel road.  The trail made a sharp turn to the right.  Down the road, perhaps 100 feet, a splendid male turkey stood on the edge of the forest.  I set my camera to maximum zoom and snapped some photos.  Unlike every other turkey I've encountered, this one did not run or fly away.  It just stood there. 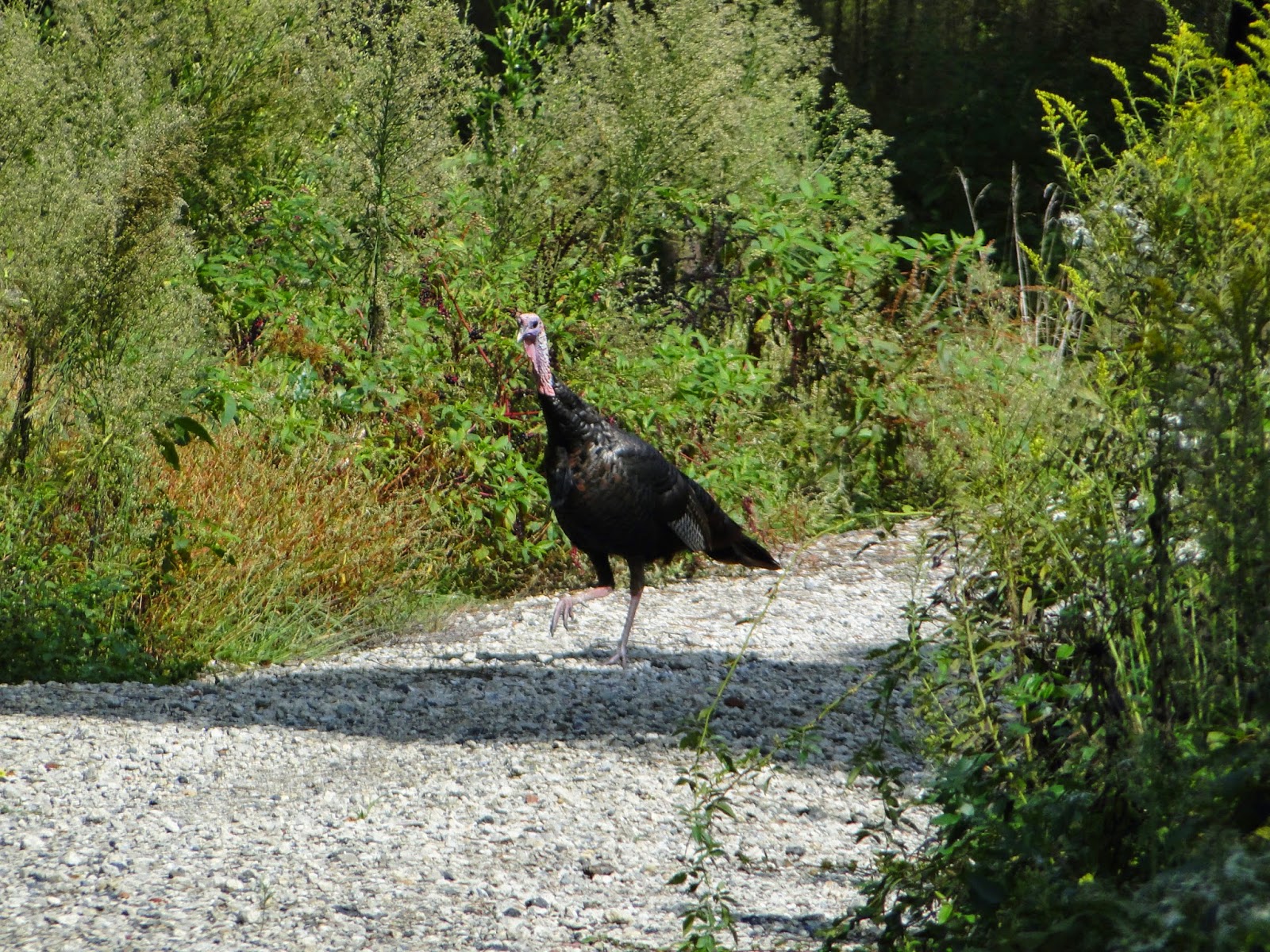 So, I thought to myself, "what if I try to get closer for a better photo?" I crawled under the fence gate, and walked slowly towards him, expecting him to move away quickly.  I kept snapping photos every few feet.  To my surprise, the gobbler started walking slowly towards me.  At one point, he did this display with his wings and tail, perhaps a show of dominance. 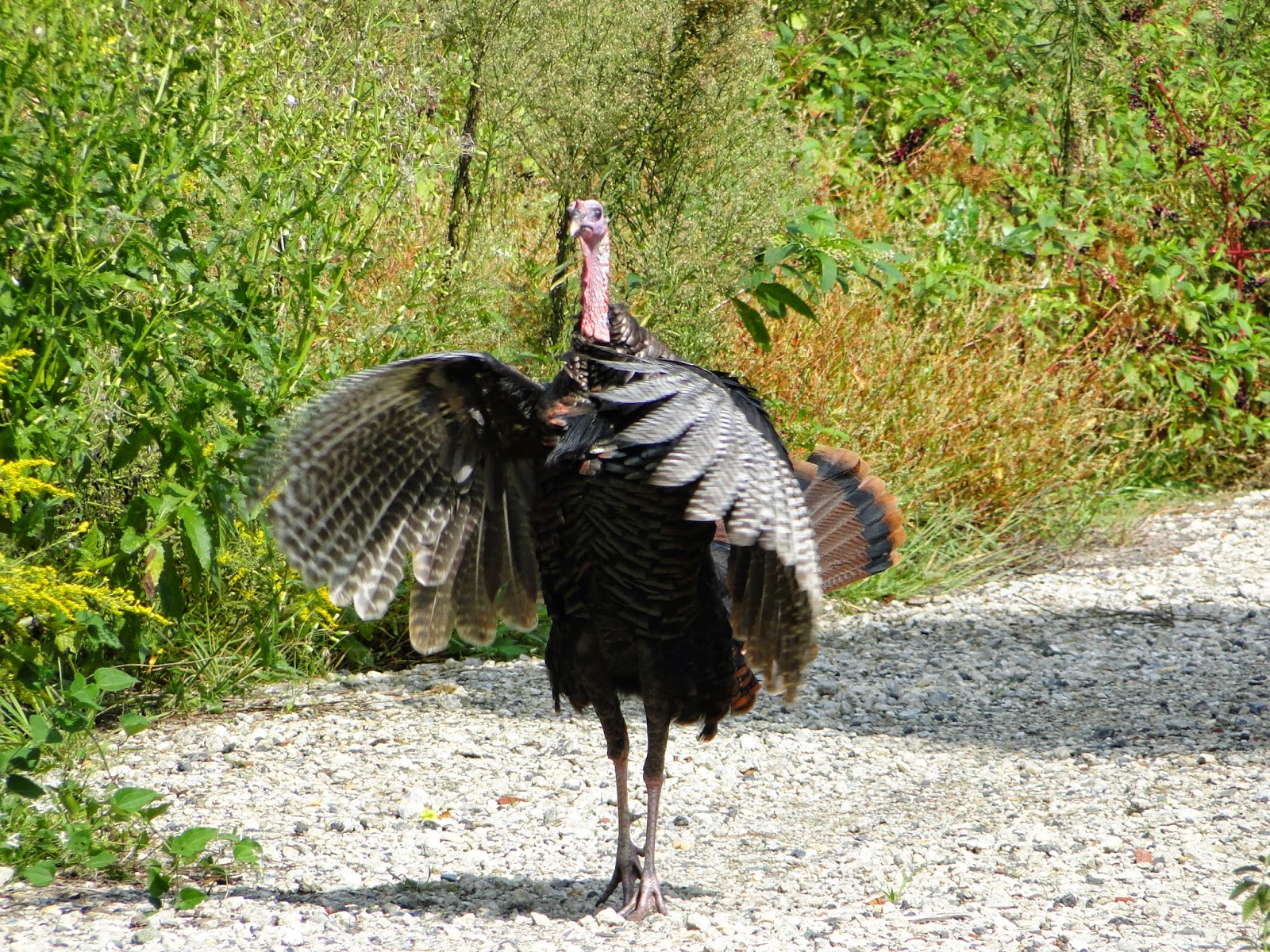 I stopped and he kept coming.  Did he expect food?  Was he going to get aggressive?  Was he just curious? 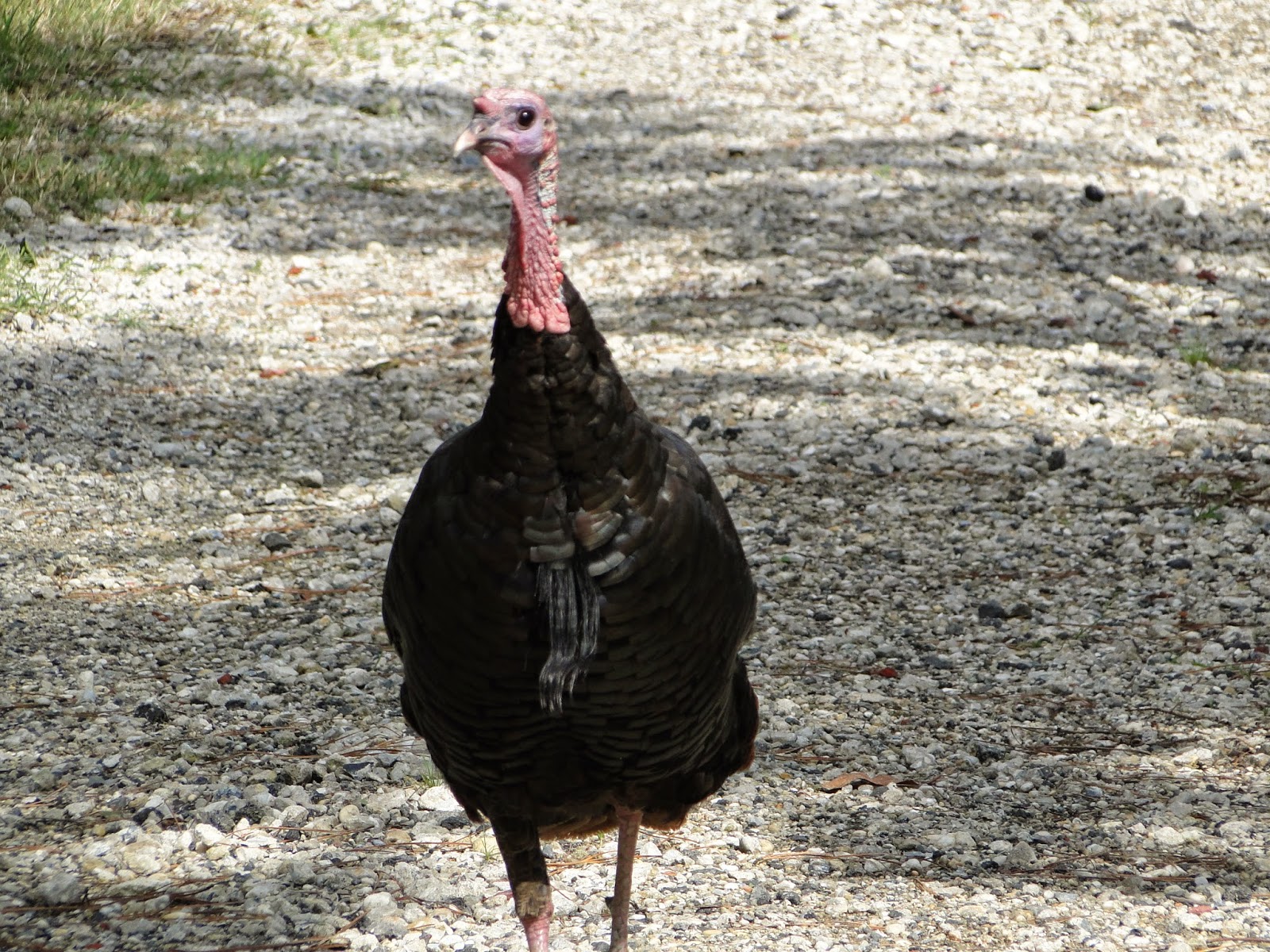 When he got about 15 feet from me, I decided that it was too close, so I turned and walked slowly away, and climbed over the fence.  The tom followed me, but did not attempt to go over the fence or under the gate.  He stayed in the grassy area on the other side of the fence, so I took the zoom off the camera and observed him, snapping several more photos.  You can get a good look at his "beard" in this one. 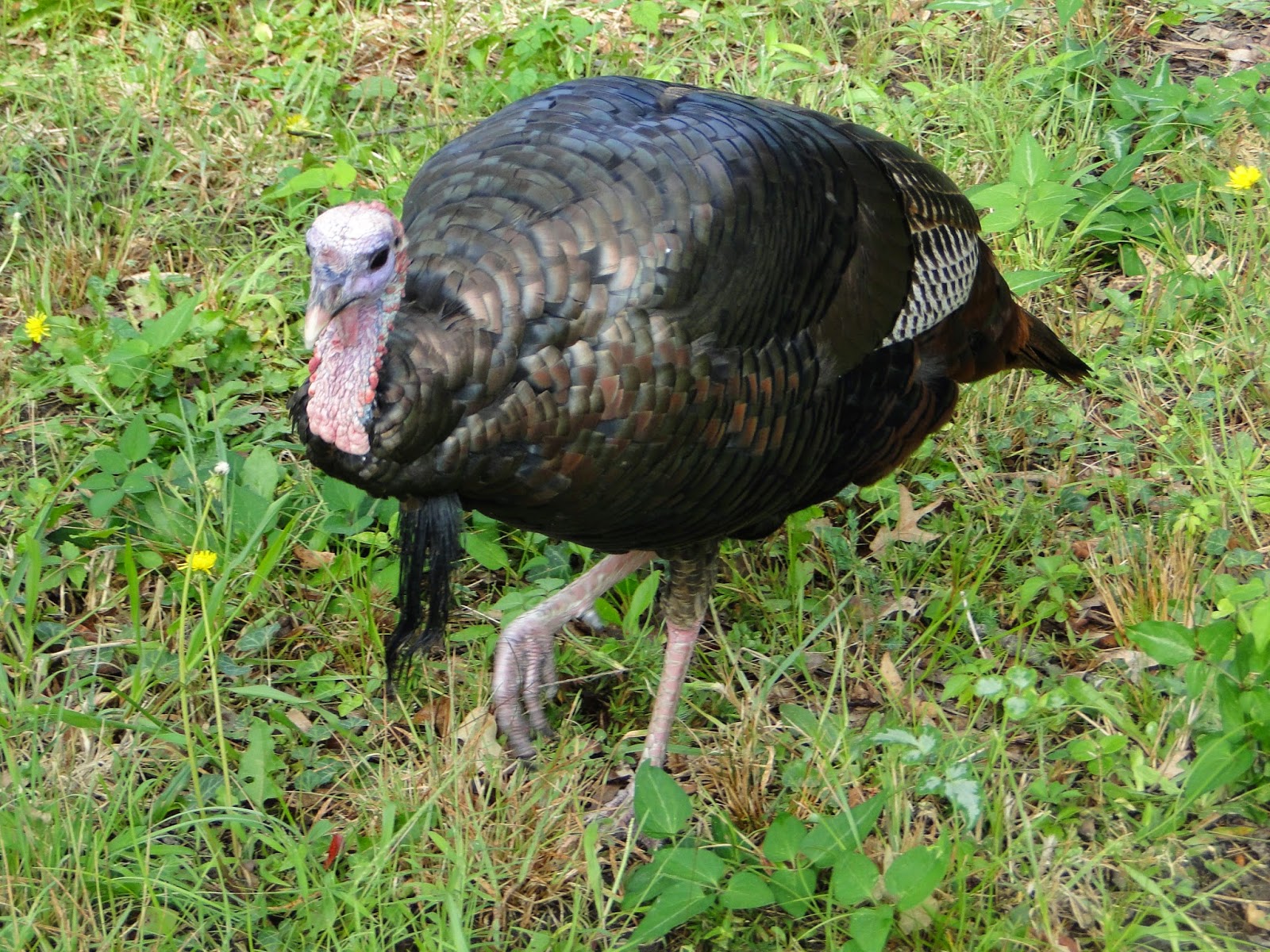 What a cool wildlife experience that was!  I've never been so close to a turkey before. 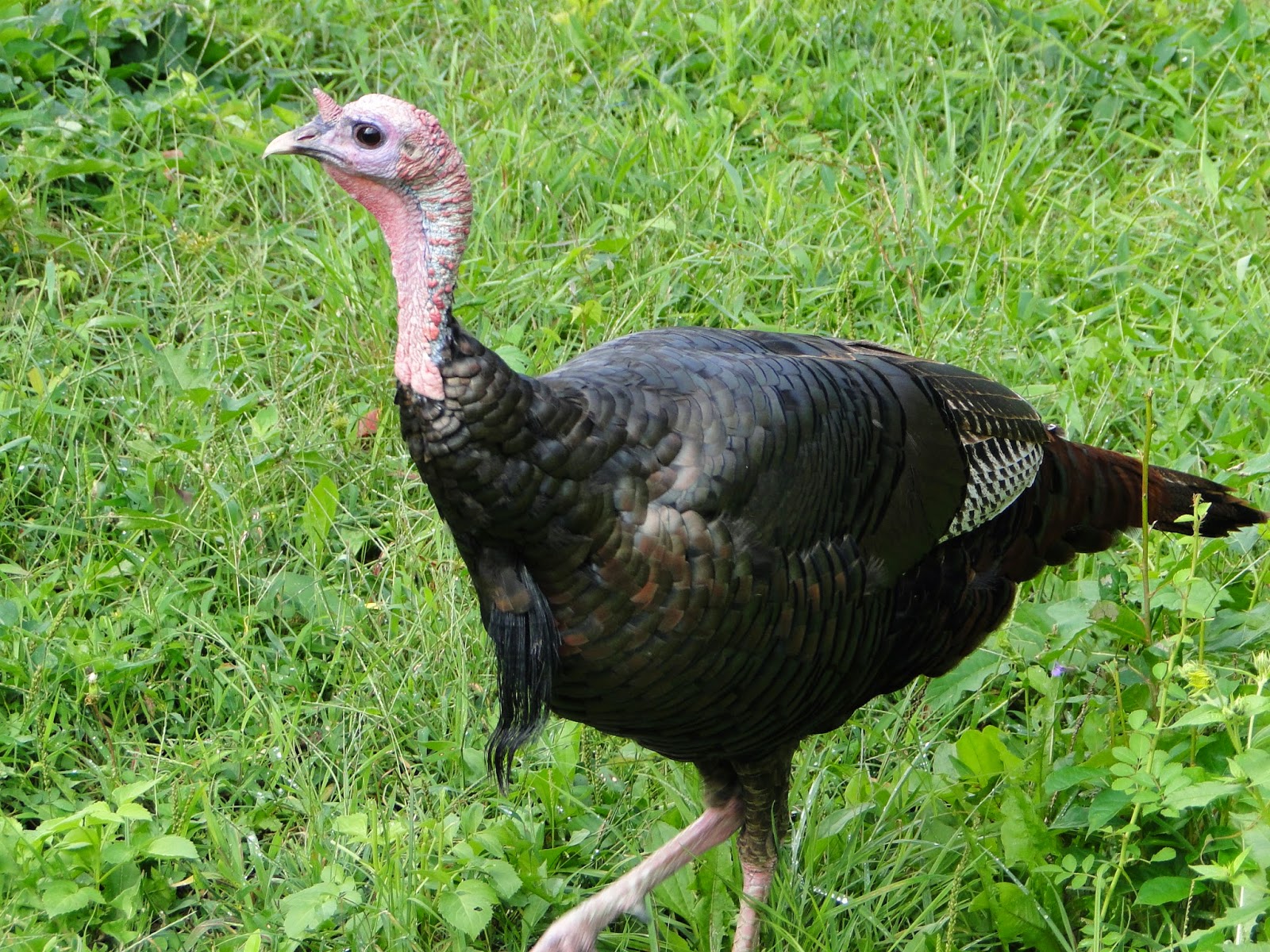 I like this photo because it shows some of the subtle colors he has when the sun hits his feathers. 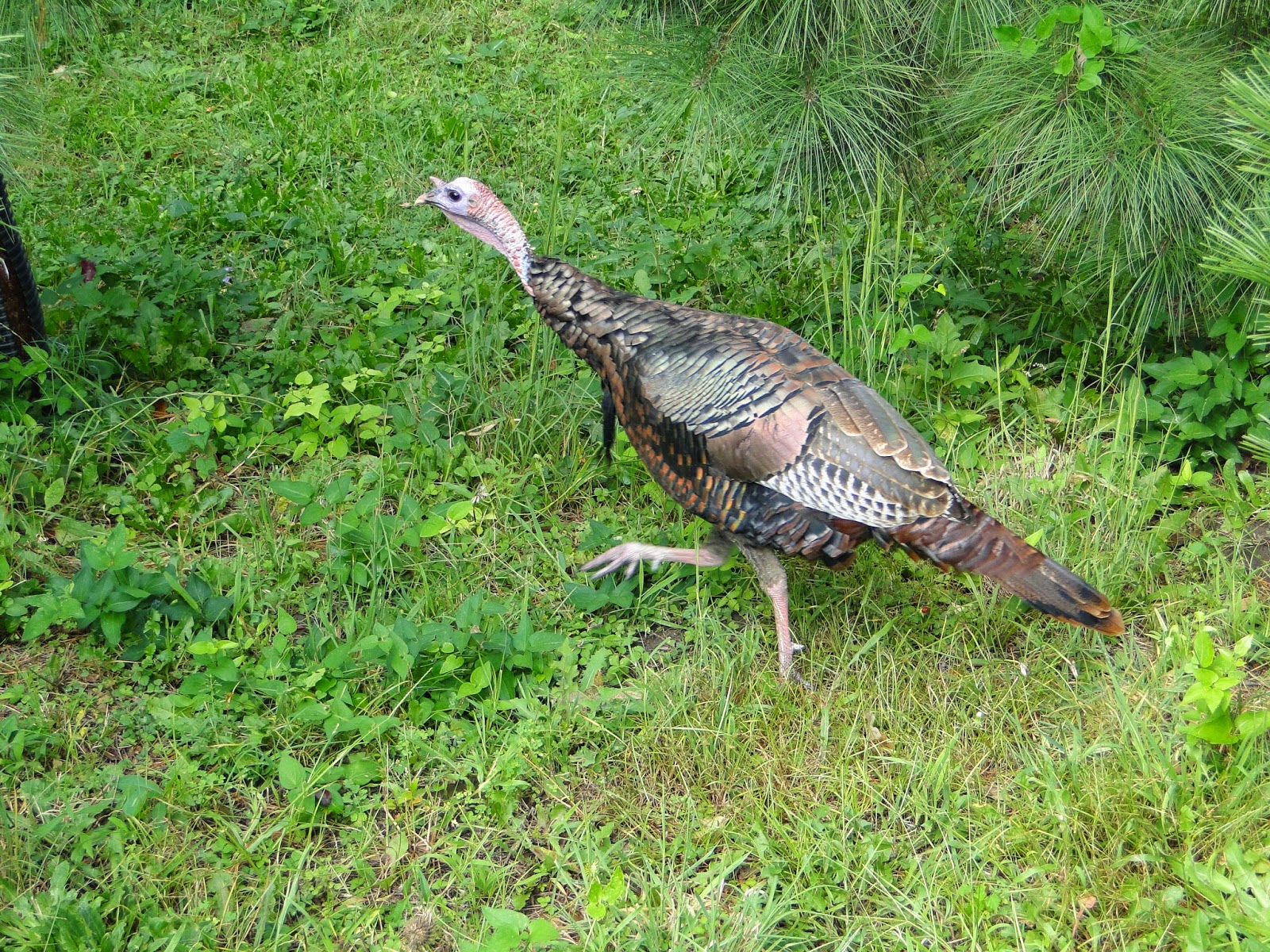 This is a wildlife sighting that I will remember for some time!
Posted by o2bhiking at 4:18 AM

Email ThisBlogThis!Share to TwitterShare to FacebookShare to Pinterest
Labels: poetry, what am I?, wildlife