Prior Day: Galehead to Zealand Falls
Next Day: Mizpah Springs to Lakes of the Clouds

On Wednesday, June 27, our merry band of five left Zealand Falls Hut after breakfast.  We essentially took  three different routes for the day.  Chris badly wanted to hike the Appalachian Trail the whole way, so he left early to get a start on this 14 mile trek.  The rest of us decided to take the most direct route to Mizpah Springs, which was 9 miles.  And Mark, who followed that route, decided to quit the hike at Crawford Notch.

Here is the elevation profile for the hike.  We had some pleasant fairly level walking for a while, then went up steeply towards Mount Tom.  After that, there was a very steep descent - especially the first mile - to Crawford Notch, where the AMC Highland Center is, followed by a climb of about 2,000 feet up to Mizpah Springs.

Here is our track for the day.  The Highland Center at Crawford Notch is where Route 302 crossed our trail.  It was about two thirds of the way, and made for a good lunch break.

Fairly soon on the morning, we came to lovely Zealand Pond. 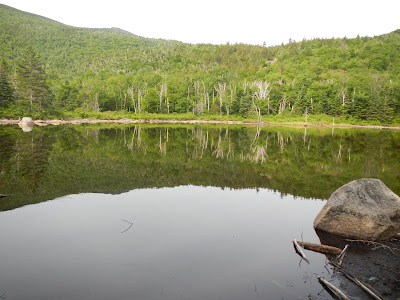 Mark and his son Josh on the trail.  Mark decided to take a rest from hiking after we got to the Highland Center. 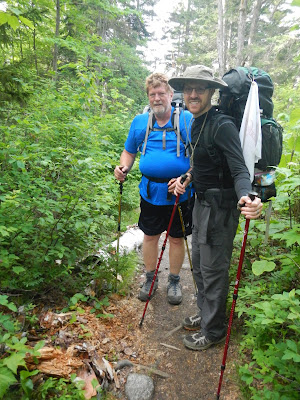 I was walking along a very easy section of trail when I slipped on a rock, and before I knew it, I was tumbling to the ground, landing hard on my right arm and stomach - yes, the same arm that I injured in the fall of two days prior!  Lucky for me, the trail was mud at that point, and not rocks.  Had it been the later, I probably would have broken the arm and some ribs!  As it was, I felt foolish, and rather like a turtle trying to get back up with the weight of my backpack.  Given that my arm is still quite sore with a big bump now - two weeks after my original fall - I can't imagine how injuring it again would have felt.  In a little while, I found a nice stream, cleaned off the mud, and got a nice drink of refreshing mountain stream water. 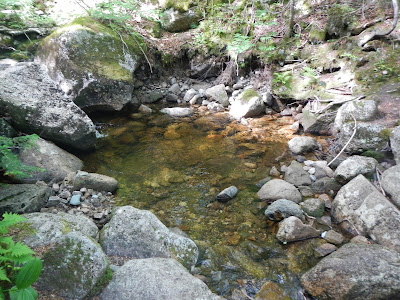 This part of the trail went through some beautiful forests, mostly northern hardwood. 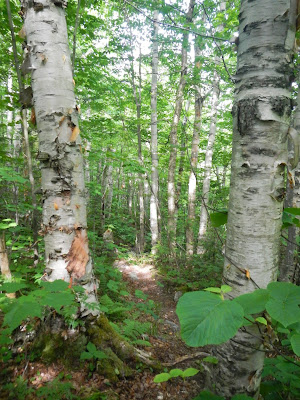 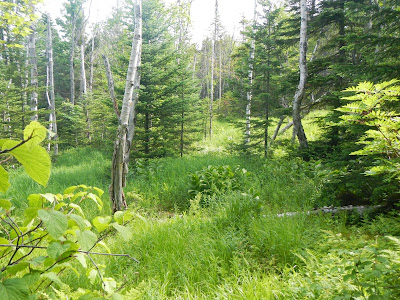 Josh and Mark hike across a board bridge through a wet area. 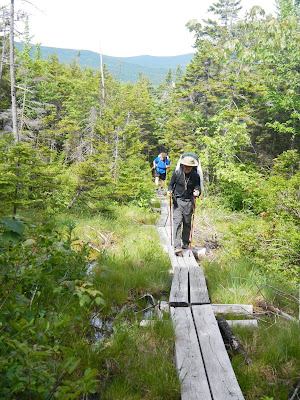 I don't think that I've ever seen a tree so hammered by pileated woodpeckers.  Look at all of the chips on the ground around the tree!  It's like someone went at it with a wood chisel. 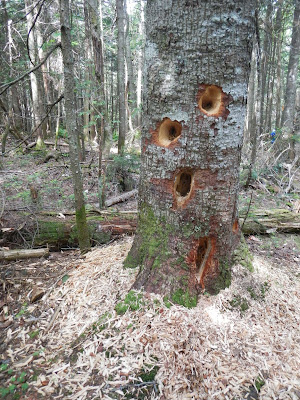 At this point, the trail was starting to climb and I left Mark and Josh behind, telling them that I would wait for them at the junction to Mount Tom.  I hiked up to that point - a steep little hike - and met up with Mike.  We speculated on how his brother Chris, was doing, then Mike went ahead towards the Highland Center, and I waited to make sure that Josh and Mark were okay.  I talked to other hikers as they came by, and when the other arrived, I started towards the steep downhill section of today's hike.  I ran into three groups of young girls with their leaders coming up the incredibly steep trail.  They were some kind of a large outing group, and all of them seemed a little distressed.  But I told them that we were all lucky to be alive and able to do something like hike up here in the Whites.  As tired as they were, I don't know if that went over well or not.

There were some nice streams on the way down.  I was not carrying as much water today because I knew that I could get water from the streams and at the Highland Center. 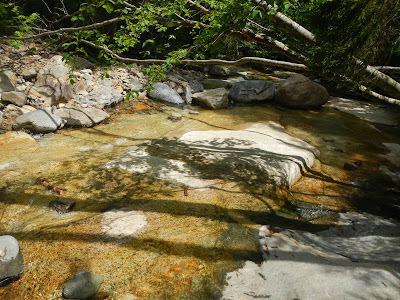 There is a scenic railway at the Highland Center that looked popular. 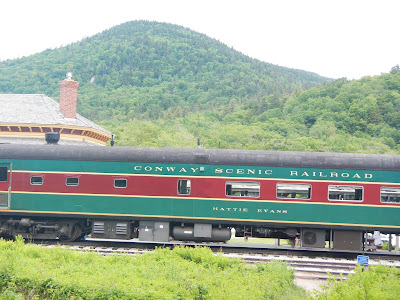 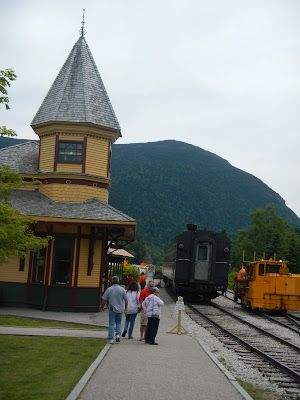 Lupines and the Highland Center. 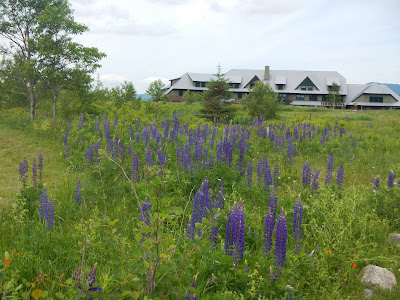 The Highland Center is essentially a sort of hotel operated by the Appalachian Mountain Club.  It has bunk rooms like the huts, with shared baths, but it also has private hotel rooms with private baths, and it has access to all kinds of hiking trails.  It would be a great base camp for people that want to hike and sight see, but who don't want the more rugged experience of staying at the huts.  I met Mike here and we bought lunch - the Mount Tom panini, chips, and cold coke - which tasted great.  Then we waited from Mark and Josh.  When they arrived about an hour and a half later, Mark told us that he was going to stop his hike here, and would see us Saturday.  The other three of us continued up the Crawford Path towards the Mizpah Springs Hut.

The trail to the hut climbs steadily uphill to reach Mizpah Springs at about 3,800 feet.  It's a pretty trail, and all below the tree line.  We even got to see a waterfall - Gibbs Falls.  The trail was familiar to me because I hiked this part in 2007 with my younger brother Nur and my friend Dick Dreselly.  We did a point to point hike up here, on to Lakes of the Clouds, summit of Mount Washington, and descending down the steep Ammonoosuc Ravine Trail. 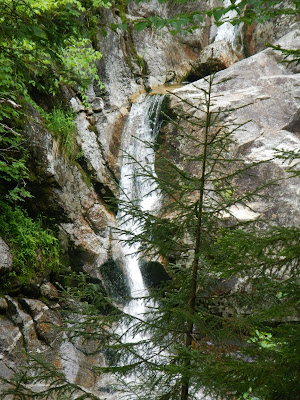 After reaching the hut in plenty of time for dinner for a change, we found our bunks and waited for Chris. 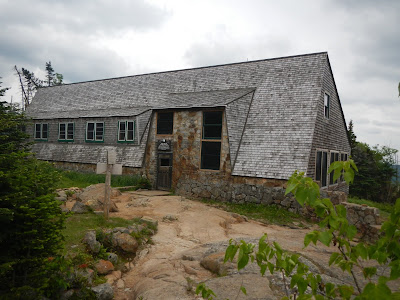 Chris showed up about 6:30, pretty worn out.  For his route, the first part of this hike had been the easiest hiking we had seen all week, but the second half more than made up for that when he had to climb about 1,500 feet in less than a mile.  He had also run out of water with several miles to go and must have consumed half of a pitcher in short order.  The weather forecast for the next day was not sounding good, so we all went to bed wondering what conditions would be like.