Before he was the Father of Our Country, before he was the first U.S. President, before he was a general in the Revolutionary War, George Washington -  in the wilderness of Pennsylvania - essentially started the first world war.  And Fort Necessity, on the other side of Ohiopyle State Park from Falling Waters, is an integral part of that event.  It also marks Washington's first military campaign (and defeat) as a 22 year old commander of an expeditionary force from Virginia, and the first battle of what would become the French and Indian War, also known as the Seven Years War.

The Upper Ohio Valley was considered vital by both France and Great Britain, and in January 1754, Virginia sent a force to build a fort at the strategic Forks of the Ohio.  This area was total wilderness at the time, but it looks slightly different now, with the large city of Pittsburgh sited there.  A French force arrived, drove the British off, and built a strong fort at the site, Fort Duquesne.  In the meantime, Washington was on the way to build a road through the wilderness to the Monongahela River, and reinforce the fort - which was now in French hands.  When Washington learned of this, he continued with the road building mission, and in May, arrived at Great Meadows in Southwestern Pennsylvania.  One of few open areas in the extensive forest, this site provided forage for the horses and cattle, and also had a source of water.  While encamped here, the Virginians learned that there was a small French force camped in a ravine not far away, and Washington led an all-night march to find them.  When they arrived at the French camp at dawn, a shot was fired - by whom will always be a controversial mystery - and a massive global war would soon be underway.  This area is now named Jumonville Ravine, after the name of the French leader who perished in the fight.  Of the 35 French, 13 died and 21 were captured, but one escaped and returned to Fort Duquesne.

Washington returned to Great Meadows and sent the French prisoners back to Virginia.  His forces began construction of a "fort of necessity" on the site - essentially a crude stockade and trenches.  After this was built, Washington took part of his force of about 400 to continue building a road from the fort towards the Monongahela.  On July 1, he learned that a large force of French and Indians were on the way, and he retreated to Fort Necessity.  The force of 600 French and 100 Indians, led by Jumonville's brother, arrived two days later and attacked from the woods during an all-day drenching rainstorm.

Washington had done a lot of things right with the fort, but one thing that was done incorrectly was that it was too close to the dense forest.  The enemy forces could take cover behind the trees and fire on the Virginians, their horses, and their cattle.  It was an untenable position, and late in the day, Washington was offered surrender terms by his foe.  These were written in French, and in them, Washington accepted responsibility for the assassination of Jumonville.  Not reading or speaking French, this was not clear to him until later, when France used it to great effect as propaganda.  But suppose he had understood and refused to sign?  His entire force would have been slaughtered or captured, so he really had no choice.  Upon the surrender, Washington and his surviving men and horses were allowed to retreat to Virginia.  But as Horace Walpole wrote: "The volley fired by a young Virginian in the backwoods of America set the world on fire."  The resulting war, the first true global war, involved many nations and was fought in North America, Europe, the Carribean, India, and many other places.

After the retreat, the French burned the primitive fort to the ground, but it has since been reconstructed from archaeological evidence.  It consists of some trenches and a stockade to give limited protection to a single small building, where the supplies - ammunition, food, and the all important rum - were stored.  There is an excellent small museum on the site, which also shows a film, and several miles of hiking trails.  I didn't have time to explore these, but did walk into the site and look around a bit.  Given that this is a piece of history I didn't learn much about in school, I found it very interesting.  Want to read more?  I read The French and Indian War by Walter Borneman earlier this year, and learned a lot from it.  Here are a few of my photos from this historic site.

This may look like the real fort, but this reconstruction of the stockade had one purpose - to protect the small building with critical supplies. 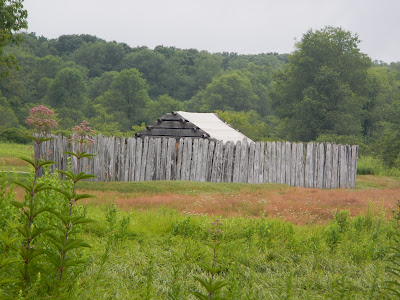 The trenches around the stockade were the real fort.  They would have been considerably taller before 258 years of erosion acted upon them. 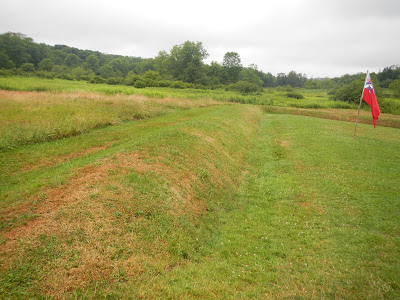 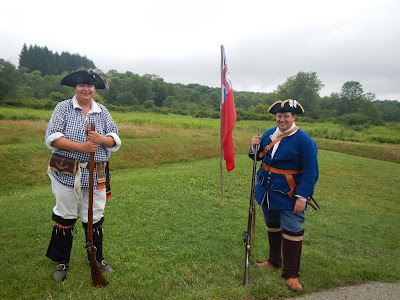 Inside the stockade, this building contained important supplies such as gunpowder and rum. 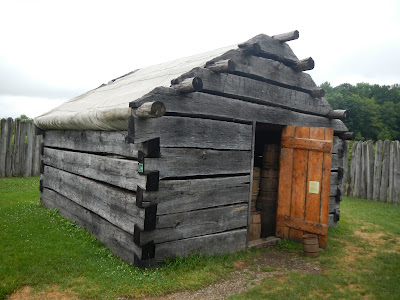 The French let the men and horses leave with their weapons, but they required that the swivel guns stay behind.  I would imagine that some of the soldiers were secretly pleased not to have to carry the heavy things through several hundred miles of wilderness back to Virginia. 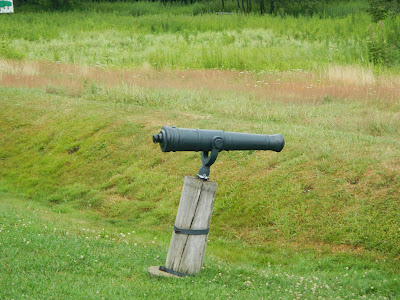 Email ThisBlogThis!Share to TwitterShare to FacebookShare to Pinterest
Labels: historical