Great? You Bet! Dismal? No Way!

Suppose you set yourself a goal of hiking to every natural lake in the State of Virginia?  How many hikes would that take?  Well, here is a clue - I hiked to 50% of the natural lakes in Virginia on Friday with my hike to Lake Drummond in the Great Dismal Swamp.  Paradoxically, Virginia's only other natural lake - Mountain Lake - is several hundred miles to the west and about 4,000 feet higher in elevation than Lake Dummond, which is not much above sea level.  I had a great day for my hike, and also took a hike to a place I'd never hiked to before.  My goal is to do at least nine other such trips this year.

The Great Dismal Swamp used to cover about a half million acres in southeastern Virginia and northeastern North Carolina.  Three fourths of that has been drained and cultivated, and almost all of the virgin timber has been logged out.  But 126,000 acres is maintained and protected by federal and state agencies - your tax dollars at work.  The part I hiked in is run by the US Fish and Wildlife Service.  It's a place I've wanted to visit since moving to Virginia, and I finally made it.

I hiked along the Washington Ditch, which is a straight-as-an-arrow 4.5 mile hike each way to Lake Drummond.  But first, at the parking lot, I walked along a 3/4 mile boardwalk that goes through the swamp.  I didn't turn on my GPS for tracking until I was mostly done walking this part and realized that it looped to the pathway.  Here is the one-way track for my hike: 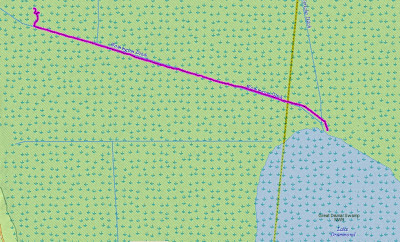 And here is an aerial view.  I started at the red circle and ended up at the purple arrow.  You can see the canal that runs to the lake, and you can see the cultivated land on the east and west edges of the photo. 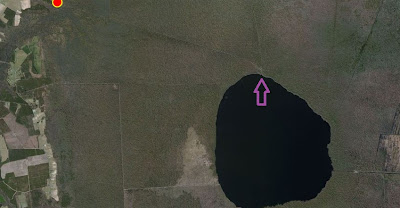 This is a great place for wildlife.  There is a sizeable population of black bear here, about 300 individuals.  I didn't see any, although they were clearly out and about in the warm weather.  However, I did see an animal that I have only seen once before on a hike, which because I have so rarely seen them was more exciting than seeing a bear would have been.  More about that on another post.  I saw lots of gray squirrels, and some birds: rufus sided towhee, a great blue heron, and a red-tailed hawk for starters.  In the part of the hike on the boardwalk, I heard pileated woodpeckers calling and drumming, but didn't see any.  As I walked towards Lake Drummond, groups of ducks would get scared ahead of me and "jump" up, flying down the waterway and into the flooded woodlands.  I think that they were wood ducks.

As I said, I started my hike along this beautifully built boardwalk, which threaded its way through very wet woodlands.  Most of the woodlands are seasonally flooded, and the construction of 150 miles of logging road have disrupted the swamp's natural hydrology.  As a result, trees like bald cypress and Atlantic white cedar are less common now, and red maples are the dominant tree over much of the area. 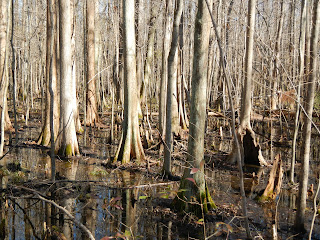 This old log was covered with fungus and moss. 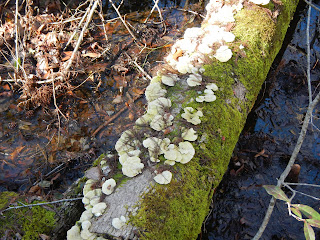 Here are a couple of views of the boardwalk. 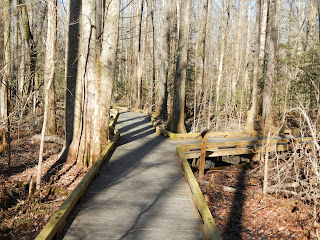 You can see that in places, you would get very wet feet without this here.  Imagine what it must have been like lumbering in here 200 years ago, and digging the canals, which was largely done with slave labor. 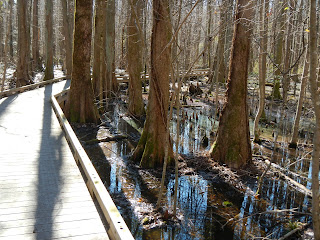 Once I left the boardwalk, I turned east and started walking toward Lake Drummond, over four miles away.  It was easy walking on the old woods road.  The Washington Ditch to my right made water my constant companion.  Beyond that was the flooded woodlands. The land to the north - to my left as I headed towards the lake - seemed drier. 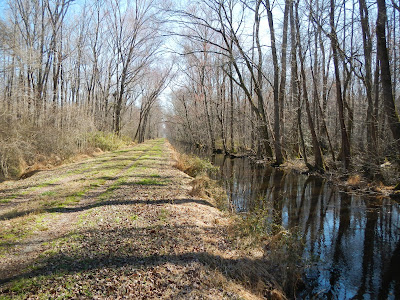 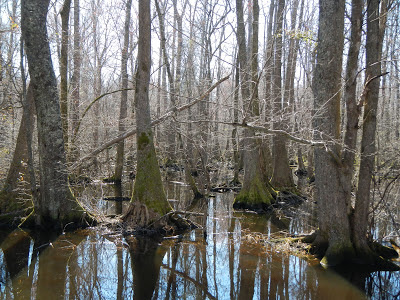 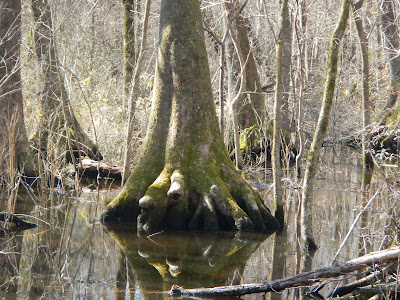 Although I didn't see a black bear, they were much in evidence along the way.  For all I know, one of them saw me or smelled me. 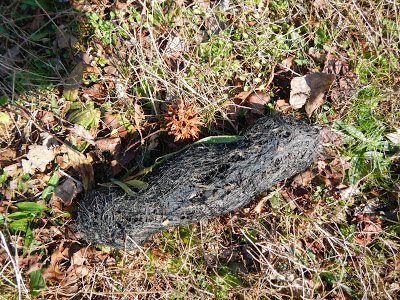 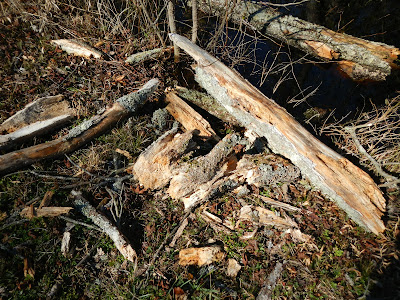 Although my hike seemed perfectly flat, the water in the Washington Ditch clearly was moving towards Lake Drummond, and in a few areas, created little riffles. Most of the time, the old woods road was two to four feet above the grade of the waterway and very dry, but at a few points, it was quite wet.  It was an easy walk, and one can easily maintain an 17-20 minute mile pace along here.  Of course, with frequent stops to check things out, my overall pace was slower than that. 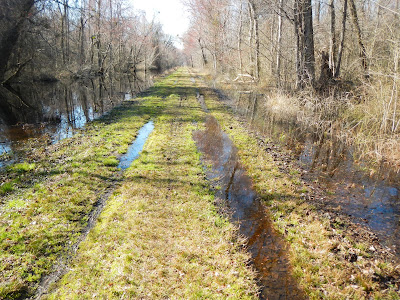 Most of the path was as straight as an arrow, but one spot had a right-way bend to it.  It was very near here that I saw my mystery animal - four of them, actually. 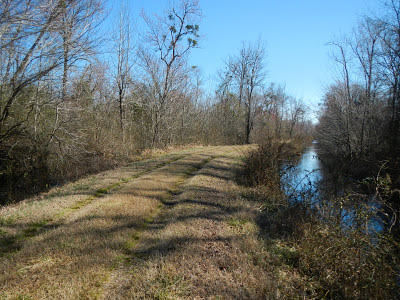 After 4.5 miles of walking, I reached Lake Drummond, "discovered" in 1755 by the first colonial governor of North Carolina, William Drummond.  It looks today very much the same as it did then.  There are two theories about how the lake was formed.  The first is by a meteorite collision.  The more likely theory is a vast peat fire that burned several feet down into the peat.﻿ 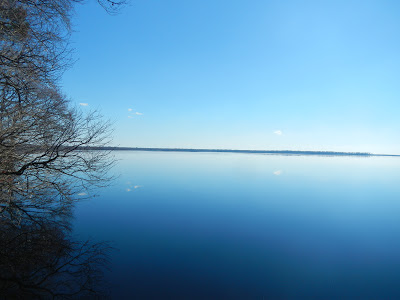 Lake Drummond is 3,100 acres in size, and had nine miles of shoreline.  It would be a tough slog to circumnavigate it.  It's average depth is only about three feet, and its deepest points are only six to seven feet.  I did see some kind of animals roiling its surface, probably some type of large fish.

I think this is a bald cypress, standing about 100 feet from the shoreline of the lake. 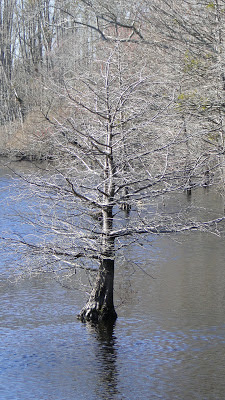 After I ate my lunch, I collected some water in my sandwich bag.  You can see that it naturally has an amber color, like very weak tea.  This is from the organic material that leaches into the water.  Supposedly the water has antibacterial properties and was valued in days of old to put on sailing ships for drinking water.  I did not test this theory. 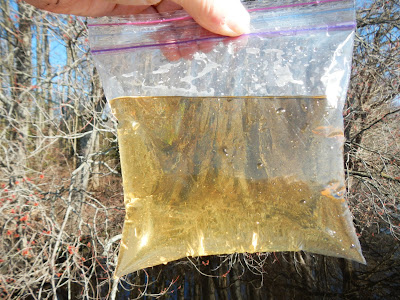 After having lunch at the lake and exploring a bit, I walked the 4.5 miles back to my car in less than an hour and a half.  I thorougly enjoyed my day of hiking in Virginia's Great Dismal Swamp, and hope to return.

From there, I drove to Sandbridge, Virginia for the night.  Although I was tired from the long walking, I walked nearly two miles on the beach that night, marvelling at the stars.  It was a beautiful and clear night.  I could not quite make out the Milky Way, but seemingly millions of stars were visible.  At the end of the day, I was worn out, having walked over 29,000 steps that day, and hit the sack by 9:15!
Posted by o2bhiking at 4:28 AM

Email ThisBlogThis!Share to TwitterShare to FacebookShare to Pinterest
Labels: wetlands