One "Last" Hike at Back Bay

In the 4.5 years I have been blogging about my hikes, I have posted frequently about hiking in Back Bay National Wildlife Refuge, nestled between Little Island City Park and False Cape State Park.  I've come to love hiking in this area, and always look forward to April 1, when they reopen the dike trails all the way to False Cape.  But all things come to an end, and  - for reasons I don't think that I will share with the whole wide world, or the whole world wide web - I recently took what will be the last of my frequent hikes there.

Saturday a week ago, I walked on the beach at Sandbridge to watch a lovely sunrise.  Then, before packing up and heading home, I decided to take this final walk in Back Bay, so I drove the two mile to the wildlife refuge, hoping to see some wildlife in the next hour or so.  I've seen plenty there over the years, including:

On my hike of a few miles on February 16, I did see some wildlife, and will share a few photos of this as well of views of the marsh and trail.  I also will discuss a "mystery guest" in a later post.

I started my walk by gazing across these cattails and the marsh at Back Bay: 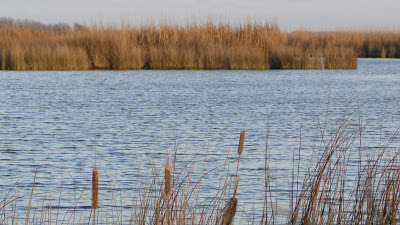 Soon, I was headed down the nature trail that ends at the views of Back Bay near the memorial to Richard Hodge: 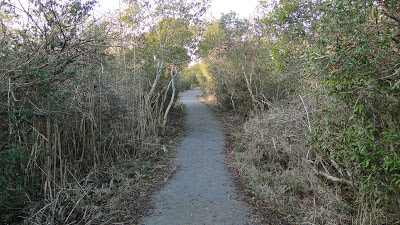 There is a little deck at the end of that trail with great views over the marsh and the bay.  The marsh vegetation looked a bit golden in the dawn's early light: 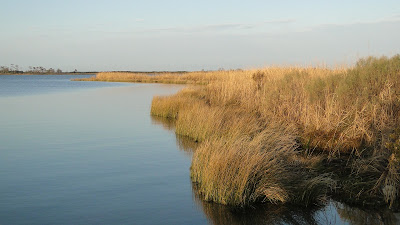 After leaving that park of the refuge, I headed down the path to the wildlife observation blind.  Along the way, I spotted this fellow, a great blue heron, trying his luck for breakfast. Near him was another animal that I will feature on a future post. 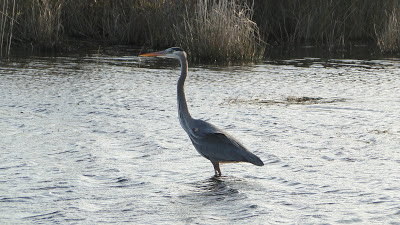 At this point, the west dike trail - closed for the winter - heads along this impoundment. 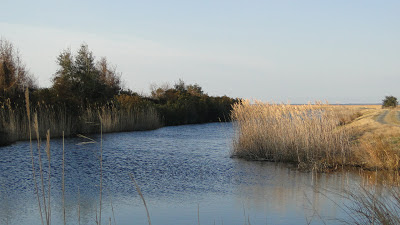 At the wildlife observation blind at the point where the east dike trail is closed for the winter, I spotted some Canadian geese and a dozen or so tundra swans.  The latter need to be headed north soon on their long and dangerous journey to the Arctic tundra soon. 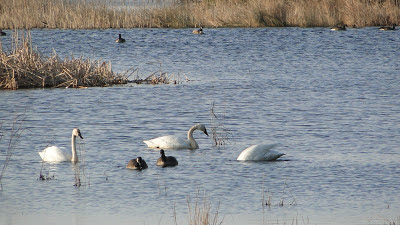 As I walked past so many familiar sights, I felt a bit wistful, and I found it hard to leave when it came time to.  But I was cheered by thought that I will likely be back here at some point for another hike, if not nearly as frequently as before.  And, of course, I plan on lots of hikes to come in other areas.
Posted by o2bhiking at 4:22 AM