If you are by yourself in an unfamiliar city, what would you do? Find a swanky nightclub and trip the lights fantastic until 3AM?  Locate the tony shopping district and spend money?  Have a great meal at a five-star restaurant?  Or explore all over the place on foot?  Well, I think you can guess which of these things I would do.

I was in Greenville, South Carolina for the weekend.  I went down there to help someone out with some things, but they were sick and so I spent much of the weekend on my own, rambling around a bit.  I don't know how many miles I walked but my pedometer showed over 38,000 steps for the two full days that I was there, so I definitely added some miles to my shoes.  There is a very nice urban trail, the Swamp Rabbit Trail ... 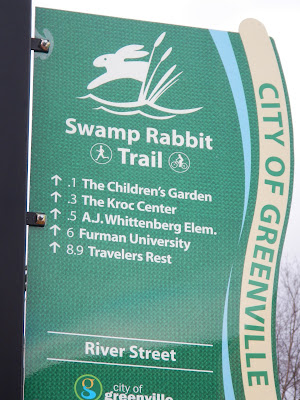 ... that runs for something like 16 miles along the river, and I walked on a bit this last Friday (without my camera), which was a cool (for South Carolina) but sunny day.  I decided to walk more of this path on Saturday, and maybe go to the zoo.  But Saturday was definitely on the cold side. There was some snow in the air, and it was breezy and raining in the afternoon when I set out.  There were very few people out and about, and I actually wore gloves and a winter hat for part of my walk until I warmed up, plus my rain jacket over my fleece.  Even though the trail was paved, I wore hiking boots because they would not get soaked and were warmer than my running shoes.  I even saw some wildlife along this urban pathway, including a belted kingfisher (but no swamp rabbits).

I had lunch in the downtown and then set out on my walk this past Saturday, walking along Main Street. 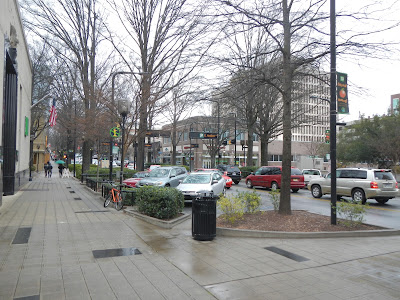 This cool statue of a wild boar is actually a fountain, but the water was not running.  When I blogged a couple weeks ago about my final hike (of so many hikes) in Back Bay National Wildlife Refuge, I mentioned some of the animals I had seen there over the years.  One I never saw was wild swine.  But I saw this one in Greenville! 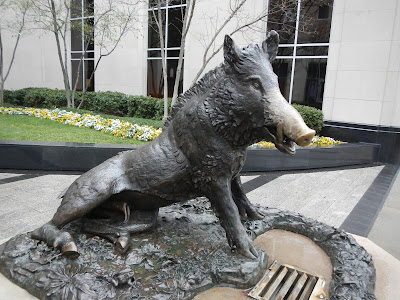 The first part of my walk was the most scenic, as it goes through the dramatic and popular Falls Park.  The falls are about 30 feet high. 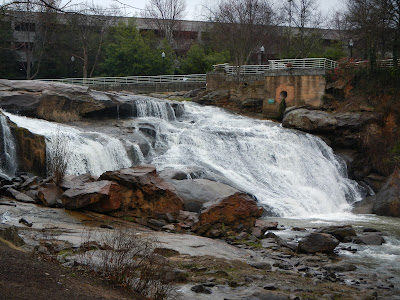 ﻿Along the way, there were nice views of the river and parks, and sure signs that spring is here, even though the temperature was in the low 40's. 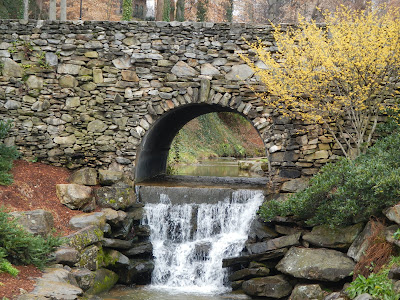 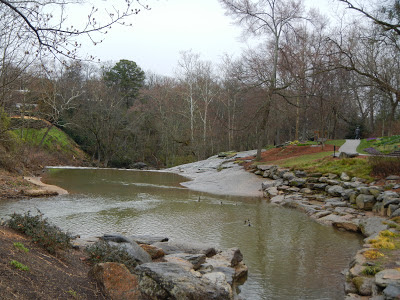 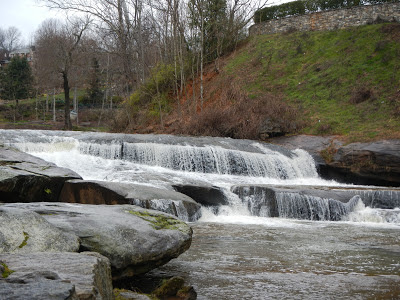 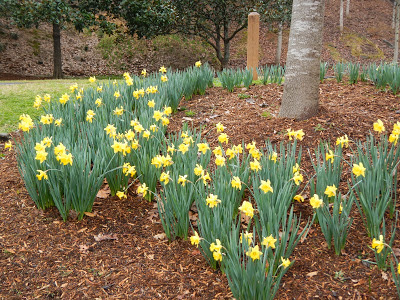 About halfway to the zoo from Falls Park is a memorial to local hero Major Rudolf Anderson, USAF, September 15 1927 to October 27, 1962.  Look at the date of his death and see if you can figure where he died for our country.  No - not in Vietnam (he had served in the Korean War, by the way).  He was the only American fatality in the Cuban Missile Crisis and was killed when his plane was hit by Cuban anti-aircraft shrapnel. 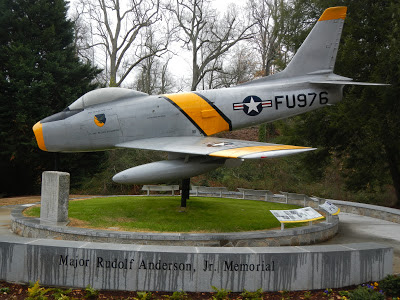 Just past the Anderson Memorial is a bridge on the Swamp Rabbit Trail named for him: 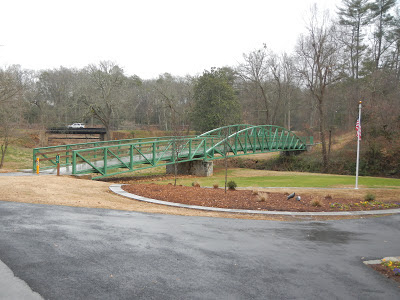 By this point in my walk, it had stopped raining and I was glad that I had done this walk, despite people where I ate lunch saying it was pouring and not a good day for a walk.  But as I told them, I knew I would dry at some point.  I kept walking and reached the tiny but excellent Greenville Zoo.  If it was still raining maybe I would not have gone into the zoo, so I am glad I got the chance.  One thing I liked a lot is that $25 cents of your admission fee goes to a conservation cause.  You get a token and use it to vote for one of four choices: 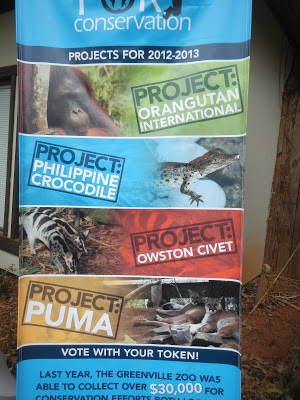 I voted for Operation Civet, which is attempting to restore the endangered Owston civet in Vietnam.  It had very few tokens.  The Philippine crocodile project had a few more tokens, the puma project had a lot, and the Orangutan International had tons of them.  They may have preselected because next to the poster shown above was a large photo of an adorable baby orangutan.  But I choose the least supported cause for my vote.  I like underdogs, I guess.  Or maybe "under civets?"

The Greenville Zoo is really nice.  It is small - only 14 acres - but its animals have a fair amount of room to act naturally.  Many of its animals are threatened or endangered in the wild.  Some are critically endangered.  Some of the animals I enjoyed seeing included the African elephant and the lion: 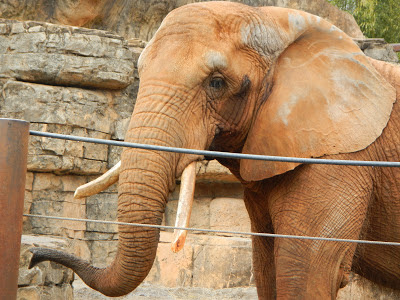 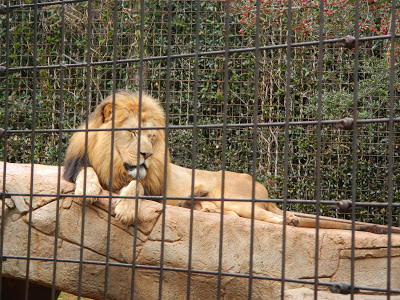 Also in the African area were a beautiful giraffe couple and their calf.  As a funny aside, a little girl who was there with a bunch of friends and their moms, announced in a voice that most of the people at the zoo could hear: "There is a boy giraffe and a girl giraffe.  I know how to tell the boy from the girl...." Then she very loudly stated exactly how to tell.  I could not help but laugh (as did the women in their group).  Here is a photo of mother and calf: 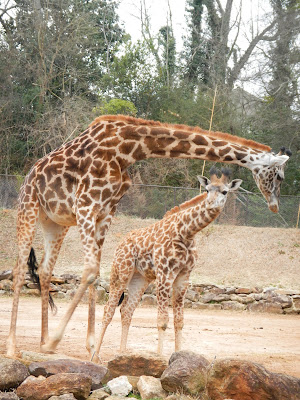 I'd zoomed in for a close-up of Mom, part of her 18 inch tongue sticking out: 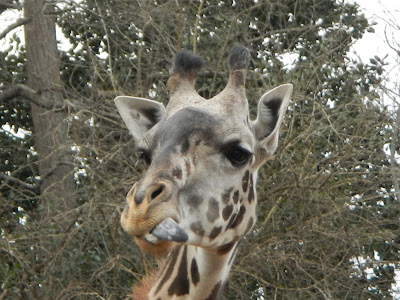 The saddest animal there was the Amur leopard, the rarest big cat in the world.  There are 35 individuals left in the wild.  The zoo had three of these magnificent and beautiful cats - equal to about one tenth the entire wild population.  In their glassed-in enclosure, one could get very close to them.  It would be very sad if these cats disappear in the wild, but it seems likely.  It is hard to believe that in our big, beautiful world, there may not be enough room for this cat to go on living. 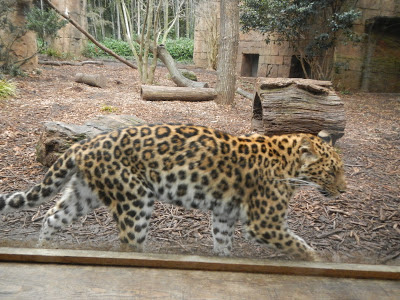 The leopards live in a very cold part of the world, and probably enjoy the cold weather we were having this day more than the sweltering Greenville summers.

After leaving the Greenville Zoo, I returned on the Swamp Rabbit Trail to the downtown, and snapped a couple of photos of the impressive falls, this one from along the path, showing the pedestrian bridge above.... 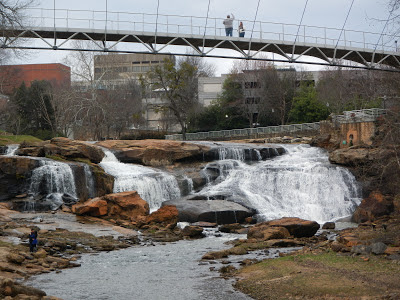 ... and this one from the bridge, which looks down on the falls. 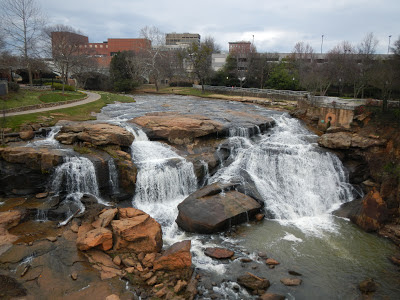 I enjoyed my time and explorations in Greenville, even though it represented a change to my original plans.
Posted by o2bhiking at 2:22 AM