Just over three weeks ago, I was hiking in the Great Dismal Swamp, and I saw an animal that I have only seen three times before in the wild - once from a boat in Lake Clark National Park in Alaska, once from a car in Big Cypress Preserve in Florida, and once while hiking in Back Bay National Wildlife Refuge.  So it was a thrill to see this rarely seen creature once again.  Can you guess it?

For me, I'll take trout for dinner
But any fish I would call winner

I love to play and romp and slide
But if I see you, I will hide

I'm member of the weasel clan
Can you guess me?  What is your plan?

I think
I have
given
enough
clues in
this short
verse, so
take a guess
and
S
C
R
O
L
L
down!

I'm a group of river otters -
perhaps mother and her daughters 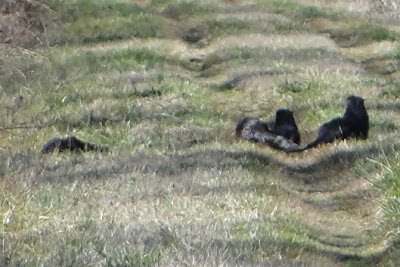 I was thrilled to see these four river otters about 3.5 miles into my Great Dismal Swamp hike.  It is a good thing that I was wearing my new binoculars, because when I spotted an animal moving near the edge of the path ahead near the water, I quickly got a look.  I could not believe it when I identified it as an otter.  It seemed to be rolling around in the path, and then it went into the water.

I got my other camera (the Sony with the better lens) out of my pack as quickly as I could, and went to where the otter had been, but there was no sign of it.  But I kept looking, and heard splashing back up the path from where I had been.  In time, using my binoculars, I spotted an otter swimming away from me.  So I moved back up the path several hundred yards, listening so splashes now and again.  Suddenly, I realized that the otter was back on the path and I then I saw that there were four of them.  They were frolicking and playing together.  I quickly got a photo or two from long distance before they all went back in the water.  I had to zoom in digitally back at home to get their image a little bigger.  I wish I could have gotten closer, but it was a thrilling wildlife moment of spotting a creature that is rarely seen by me.

There are four in the photo, although the middle two are very close together, and the leftmost one is lying down in the grass.

Email ThisBlogThis!Share to TwitterShare to FacebookShare to Pinterest
Labels: poetry, what am I?, wildlife