Our first stop on our Scotland trip was not in the United Kingdom at all, but in Iceland.  Our jet to Glasgow, scheduled to leave at 7:30 AM, was delayed to after 5PM because of labor actions.  There was nothing we could do, although missing our first day in Scotland - lots of stuff planned, including a hike - was frustrating.  At the airport in Kevlavik, we thought there would be a bunch of tours available to pass the time, but I guess one had to travel to Reykjavik to perhaps catch a tour, and that was uncertain.  It is not the peak tourism season in this remote island country, so there was no one at the airport to check with.

The best we could do was catch a bus to the Blue Lagoon and spend a couple of hours walking around the interesting volcanic regions there on some paths.  Something like 99% of Iceland's energy usage is geothermal, and the hot springs there are a byproduct.  They are very popular with locals year-round for bathing in the very hot springs.  It was really interesting to see, and since we did some short hikes there, I thought I would post a few photos.  This is all natural hot water, courtesy of Mother Nature.  It starts deep in the earth as superheated steam, and eventually surfaces as very hot water - I would say over 100 degrees F.  Look at all the lava rock! 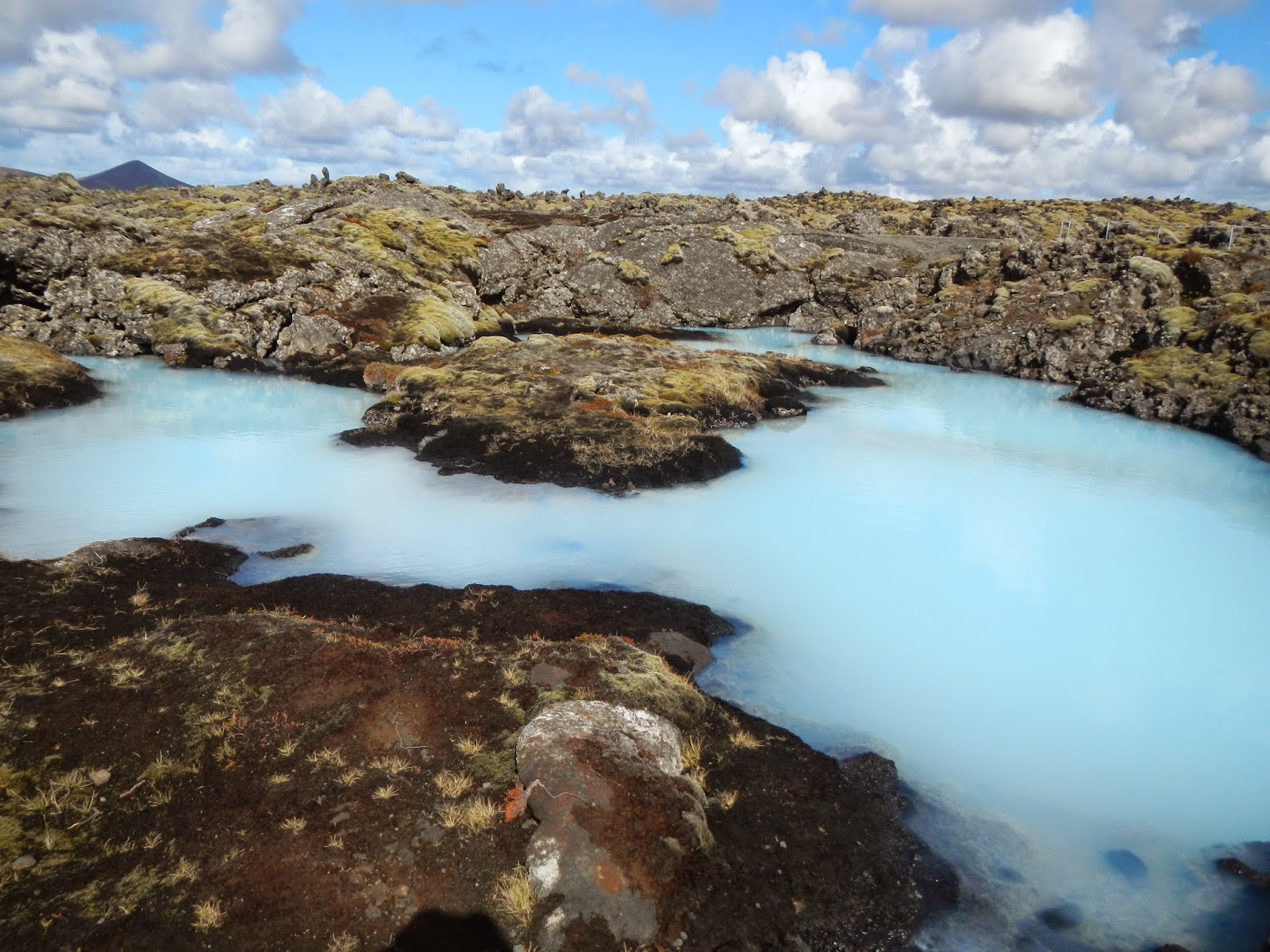 You can see people enjoying the water on a cool day - about 8 degrees C - at the spa.  The water is very healthy for one's skin. 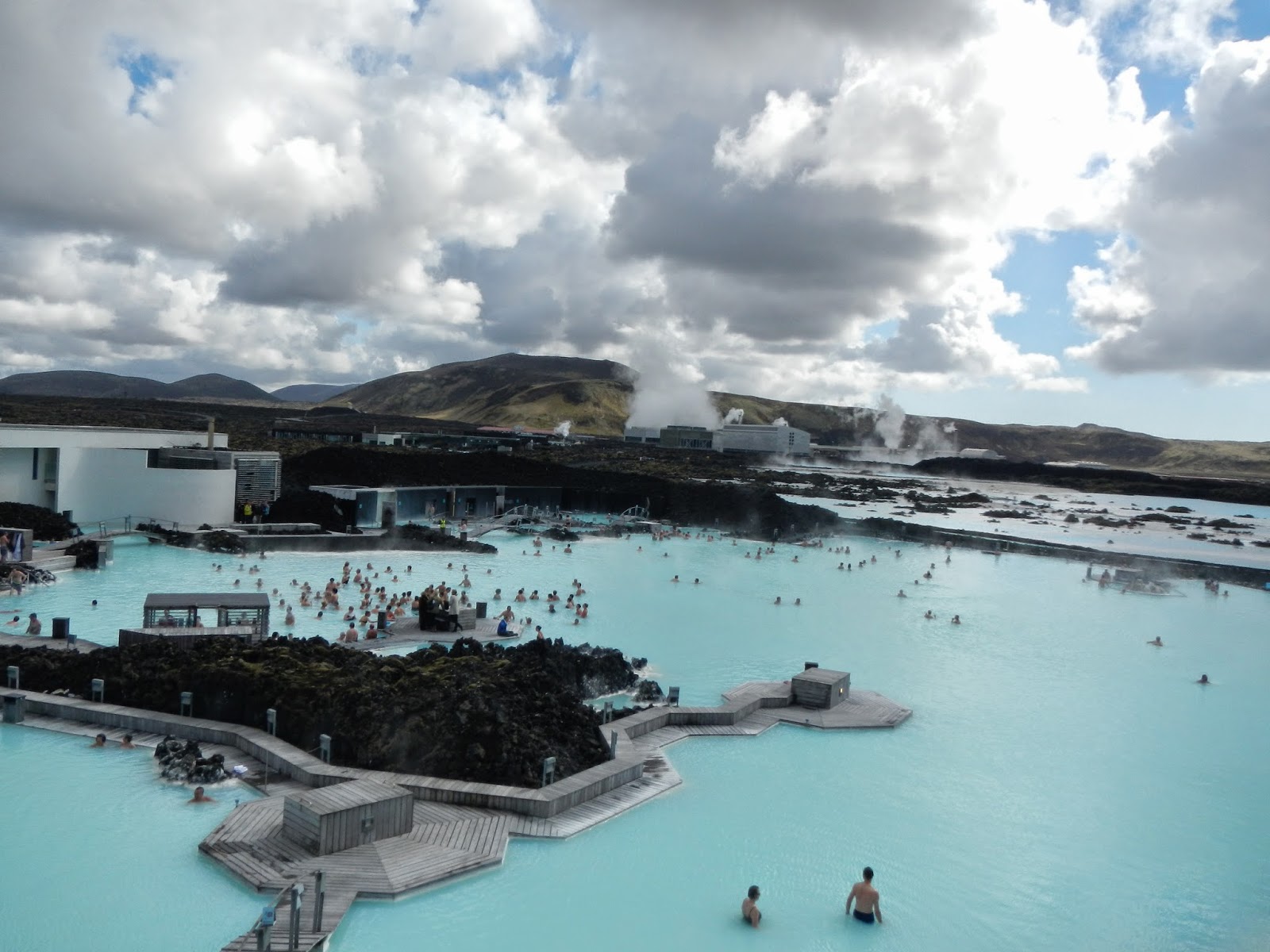 It is rugged country here.  It was also the last blue sky and sunshine that we saw for four days. 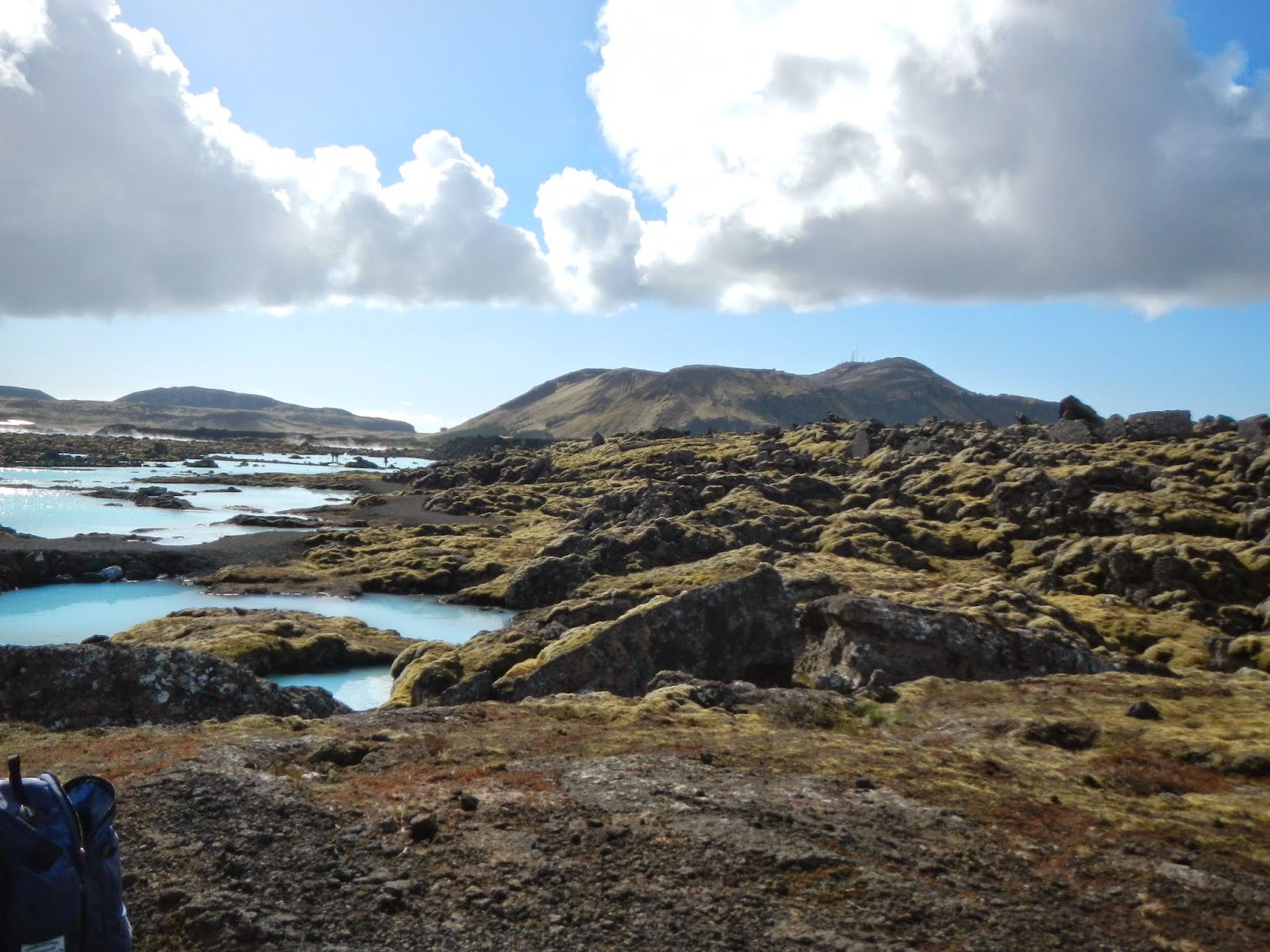 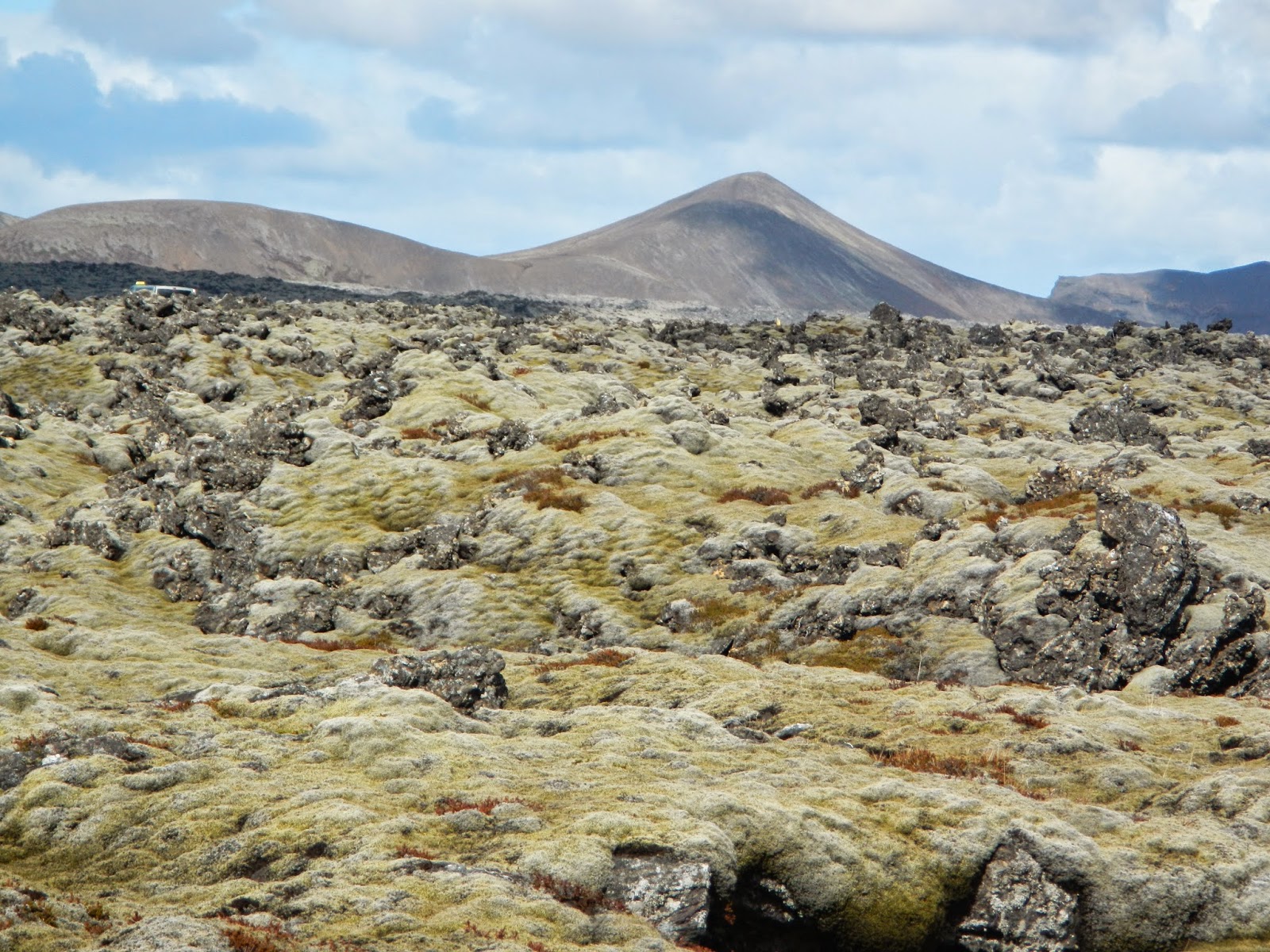 This panorama gives a good sample of the area here.

It would have been kind of fun to hike up one of these mountains. 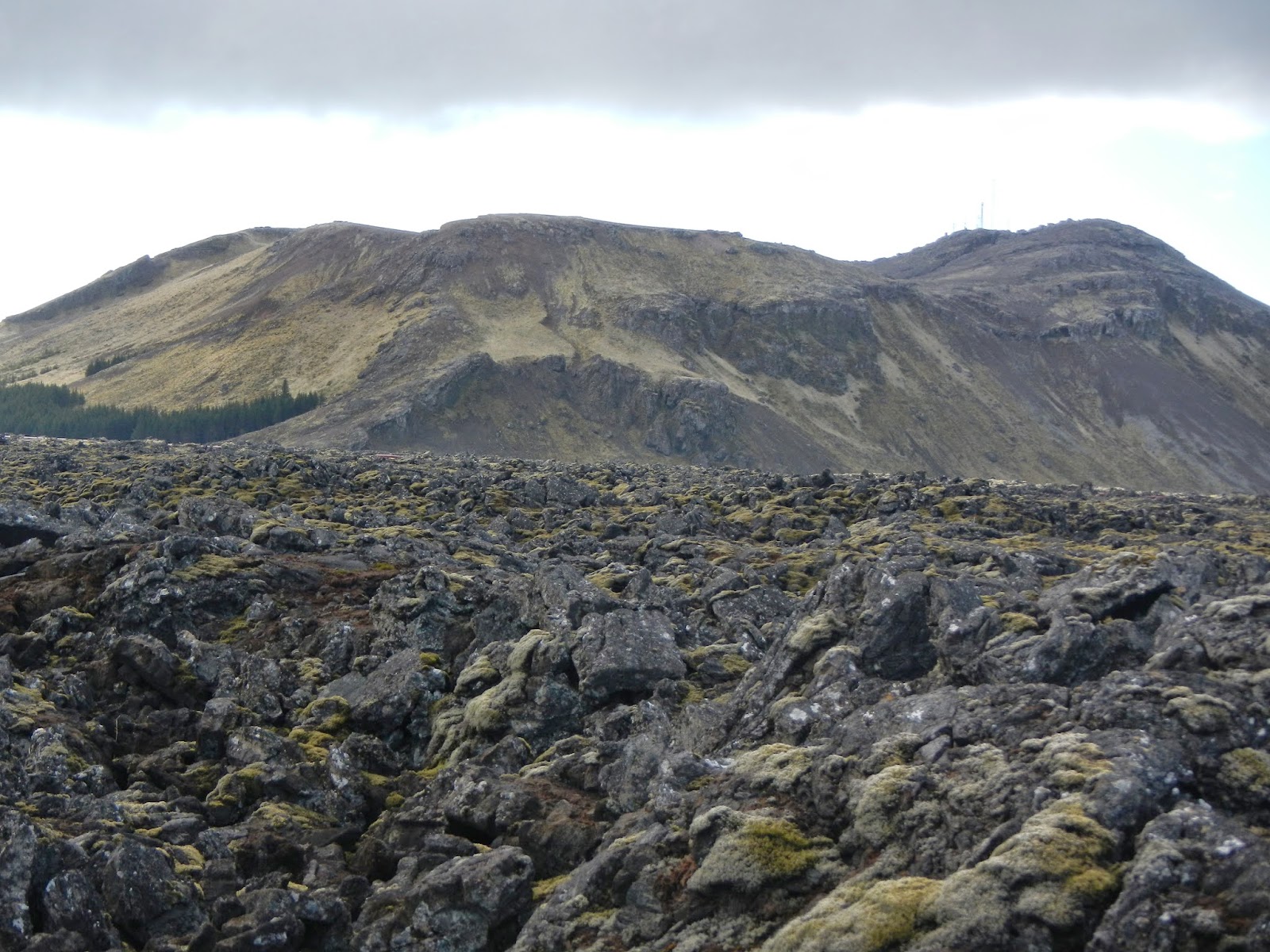 ﻿I sure hope that I can get back to Iceland some day for some real outdoor adventures.  There is great hiking, boating, and skiing here all over this country, as well as incredible waterfalls, geysers, and volcanoes.  I could never master their language but many people speak amazingly good English here.  Check it out if you want an out of the way adventure in a friendly place.

My rule is that I will not say that I have been to a place unless I get "boots on the ground" for at least a little bit.  Stopping in an airport does not count.  So, although I really wanted to get to Scotland on time, since that didn't happen, at least I can say I visited Iceland for a few hours!

Here is the location of the Blue Lagoon (small blue arrow near the bottom left of the map): 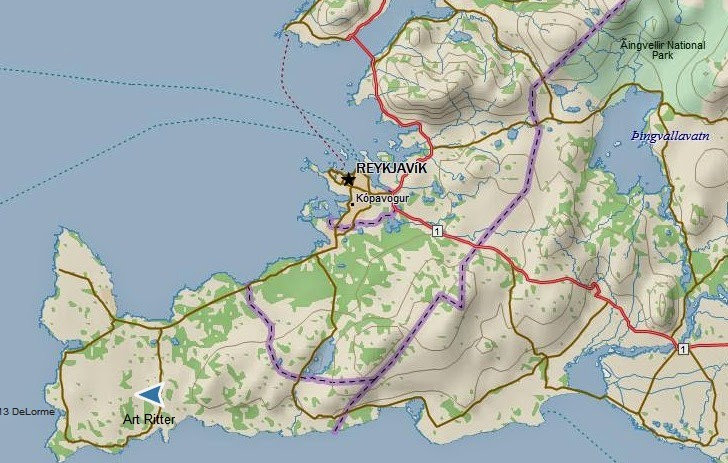 It is near the end of the southern most of the western peninsulas of this island nation.  Iceland is about 40,000 square miles in size (roughly the size of Virginia or Hungary).  It is the 18th biggest island in the world, and is the most sparsely populated nation in Europe, with about 80% of it uninhabited.  Wouldn't it be a fantastic place to explore? 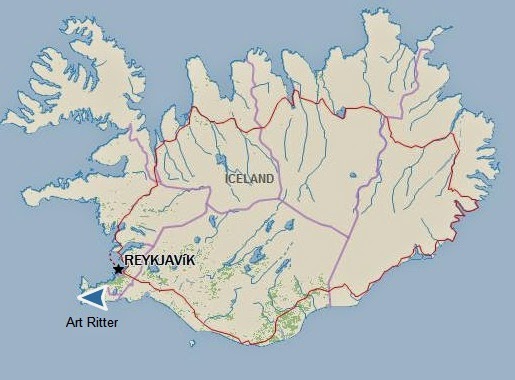 Email ThisBlogThis!Share to TwitterShare to FacebookShare to Pinterest
Labels: iceland