As I wrote in the overview about this hike, my trek in the Cranberry Wilderness did not turn out as expected due to illness.  We got a late start because of 100 miles of extra driving because of an error on a website that gave directions, and frankly, incompetence on my part for not double-checking the route to the trailhead or at least making sure that I had a state highway map.  But we hit the trail in good spirits late last Thursday.

Our route Thursday, just short of three miles, is shown on the red track.  I forgot to turn on tracking for the first part of Friday's very short hike, but it follows the stream contour from where we camped (red star), and about halfway through the hike of less than 1.5 miles, I did capture the rest of the track (in gray) until we got to Friday night's campsite. 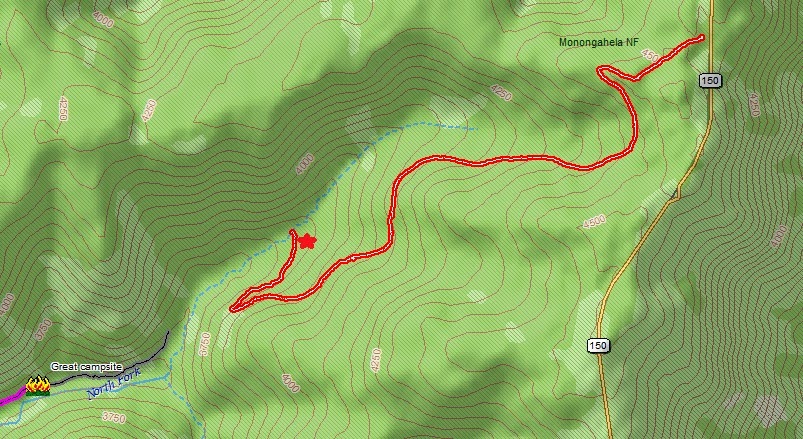 Here is the elevation profile of the first day.  It was an easy downhill walk.

We started out in a dense spruce forest.  Here, Libby and her dad hike along. 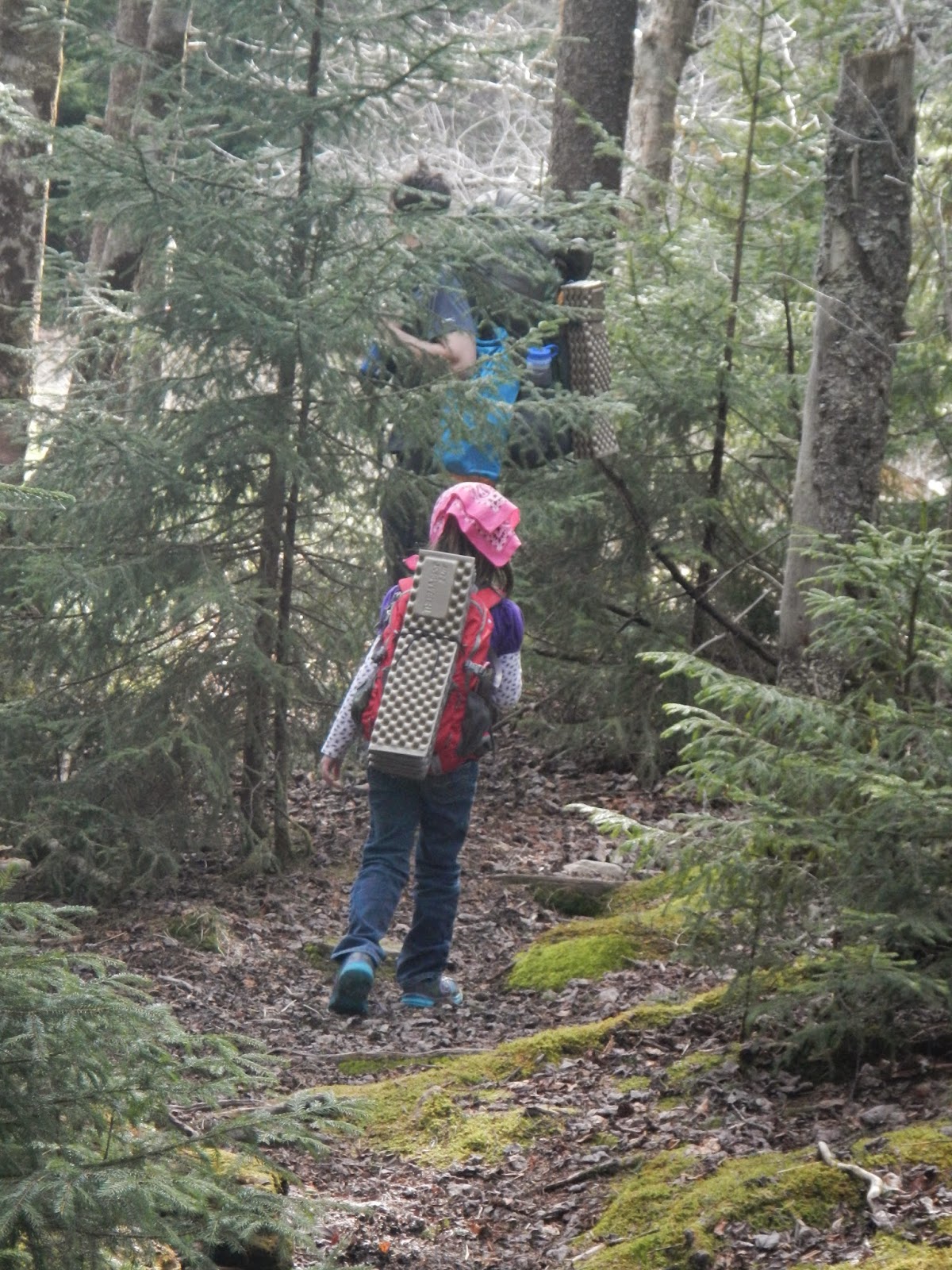 I really like spruce forests.  They remind me of Maine.  Plus green is my favorite color. 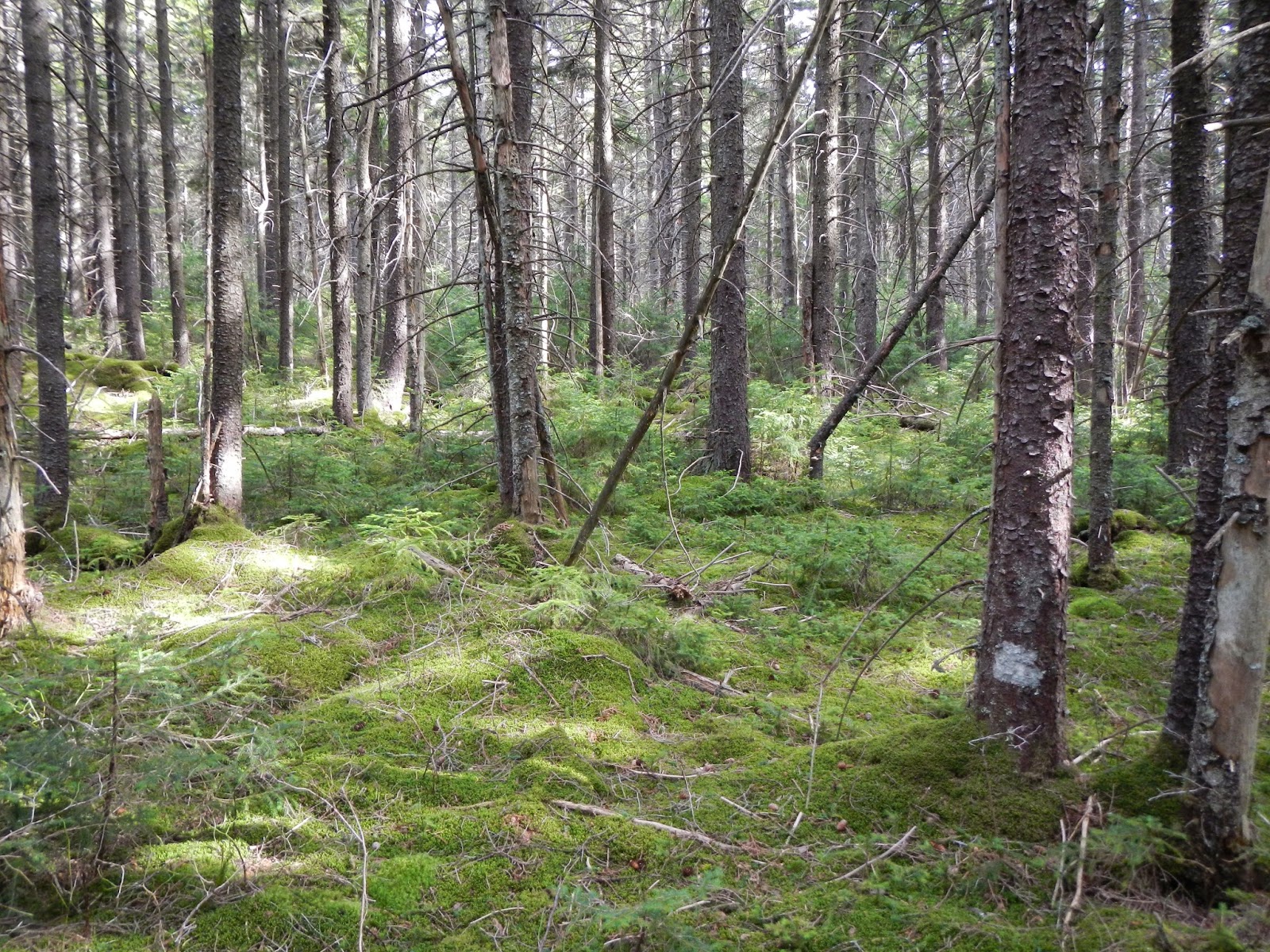 Even at these moderate latitudes, there are trees of the northern forest.  This one is a large yellow birch.  We found pieces of bark along the trail from birch trees, and we showed Libby how to start a fire using birch bark for tinder. 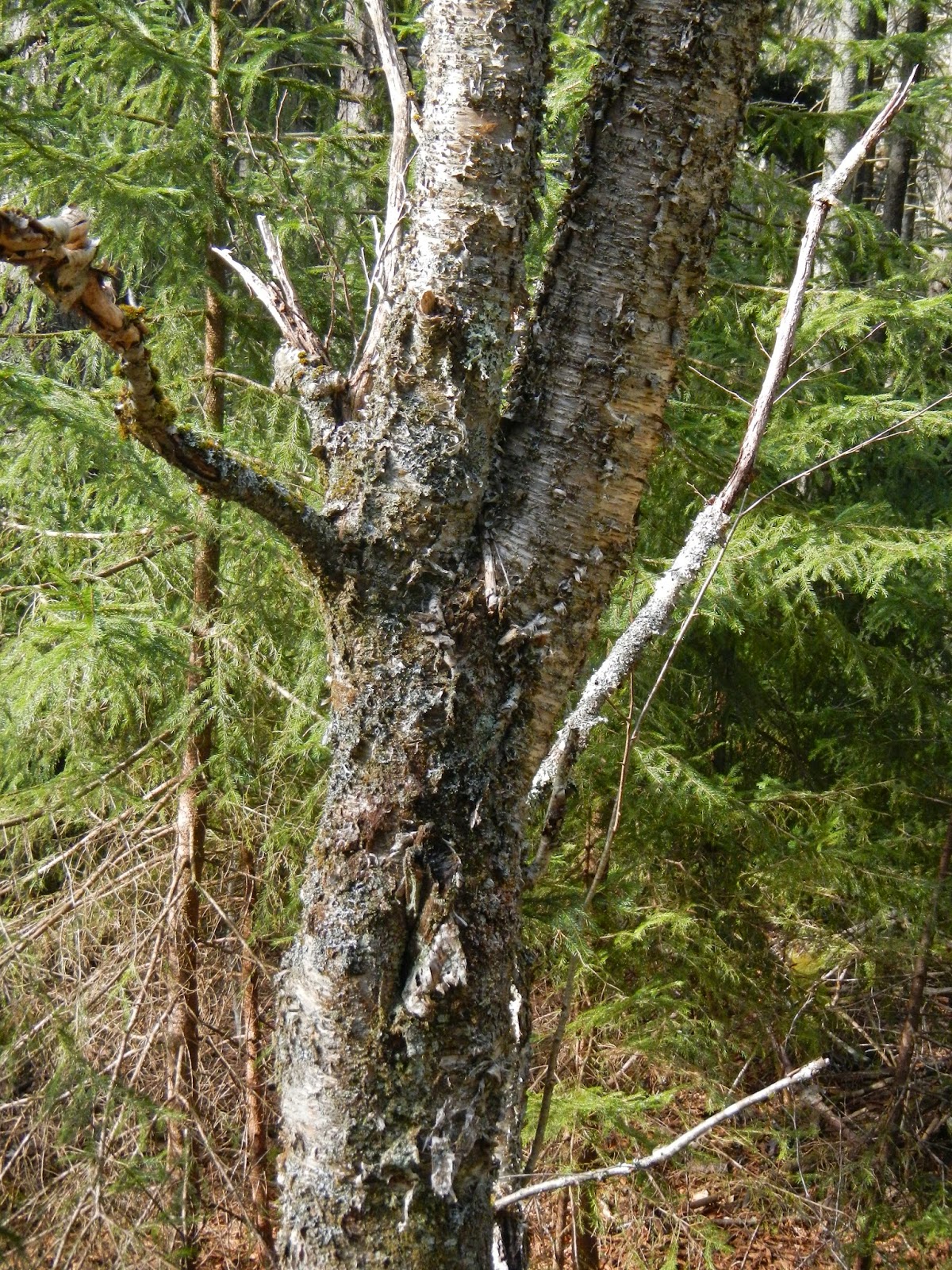 It was rare on this hike to have a view of anything beyond the forest, but now and then, we would get partial views because there were so few leaves on the trees.  In the distance is the ridge line that the North - South trail follows. 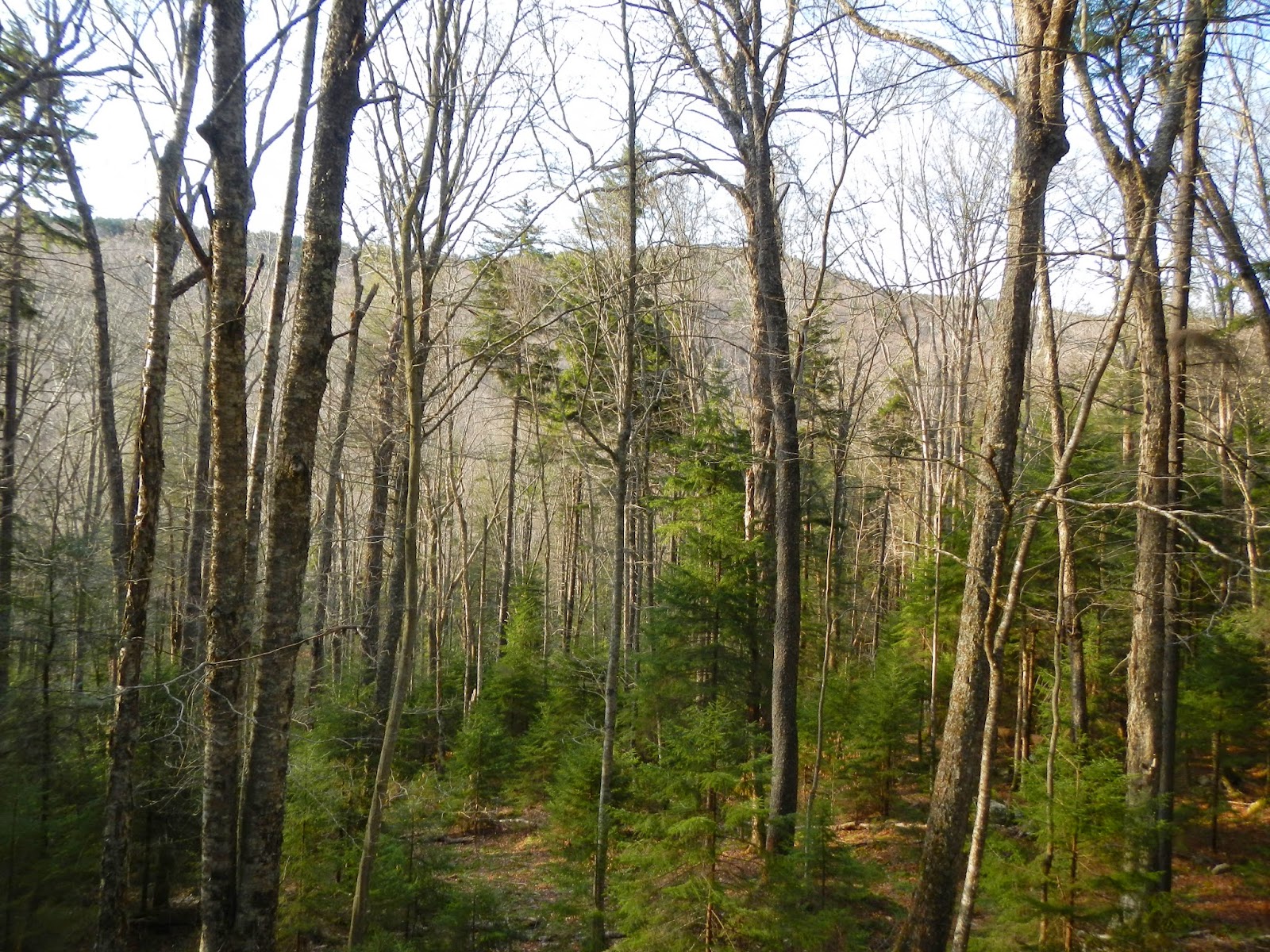 Carl and Libby got a campfire going after we set up our tents near a stream. 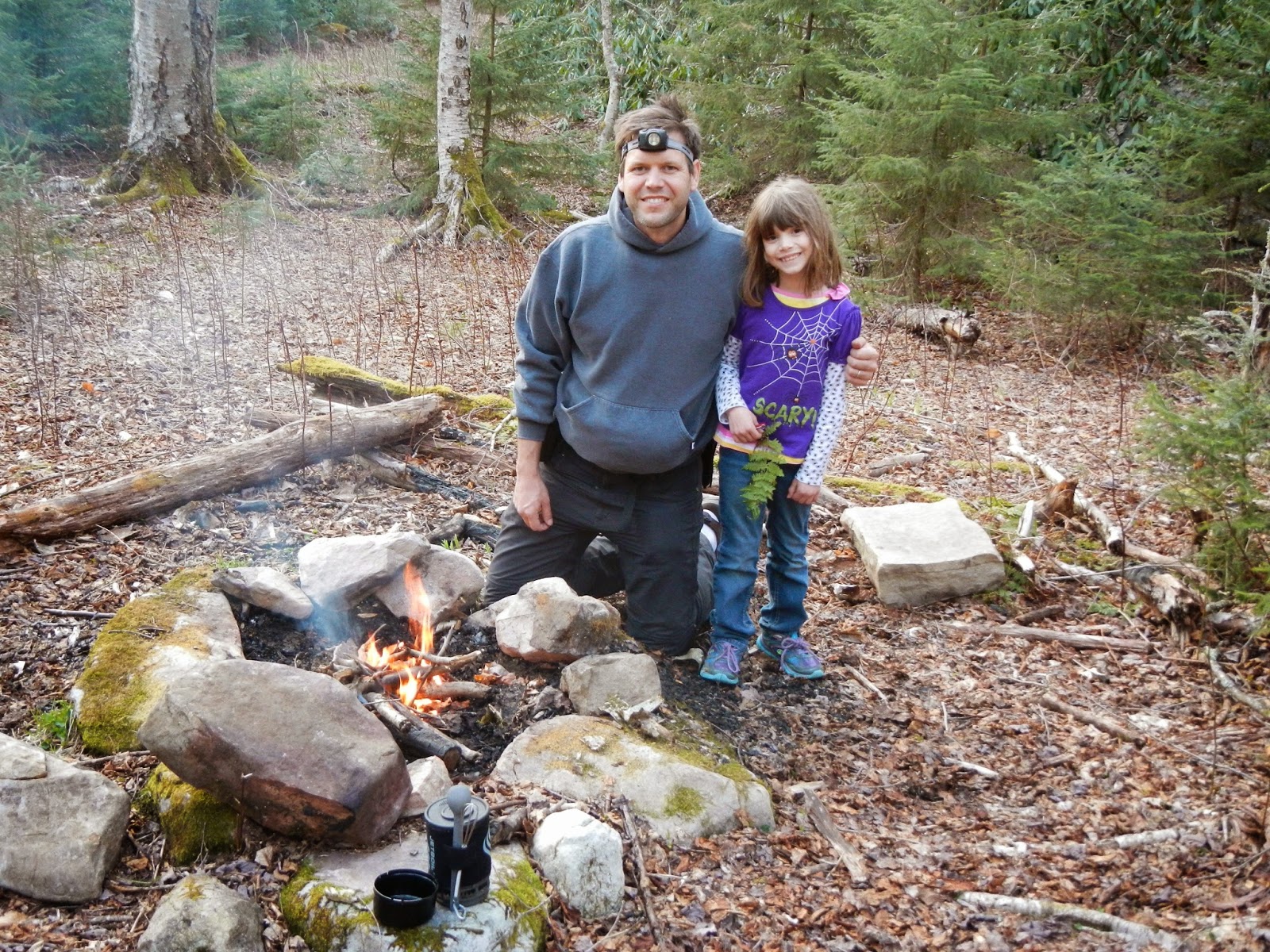 Home sweet home for the next half day.  It was at this point that, while I didn't feel sick, I felt no desire to eat anything at all.  I considered making my dinner of vegan curry, but decided against it.  Wise choice, because starting about 10PM I started vomiting over and over all night.  I threw up the lunch from Subway.  I threw up a bowl of cherrios from last week.  I threw up a veggie pizza from last month.  I am pretty sure that I threw up a piece of pumpkin pie from last Thanksgiving!  That is what it felt like, anyway.  I got to the point where I couldn't even leave the tent to puke, just unzipped the flap and stuck my head out.  I was awake all night until sometime after 4:30, when I drifted off for an hour or so in exhaustion.  Somewhere in there, I did hear a barred owl calling, which was cool.  Carl and I also both heard an incredible crash during the night.  It scared us both.  Our guess is that it was a large tree falling somewhere nearby. 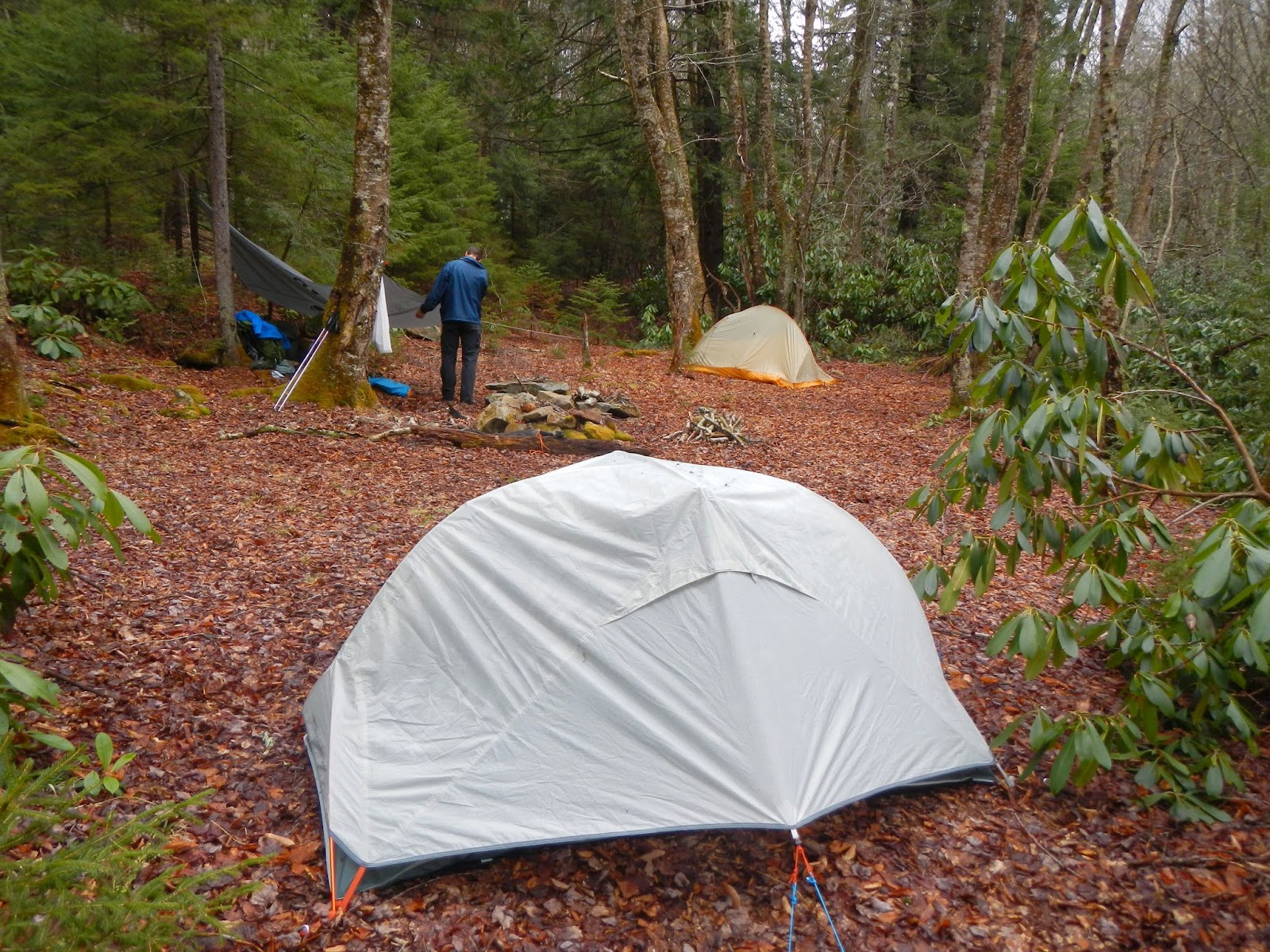 In the morning, I tried eating a power bar and some bread, but it came back up later.  After that, I didn't eat a thing all day.  I could not even keep water down until sometime after 5PM.  We decided to break camp and see how far I could get.  It was raining by 11AM when we packed up and hit the trail. 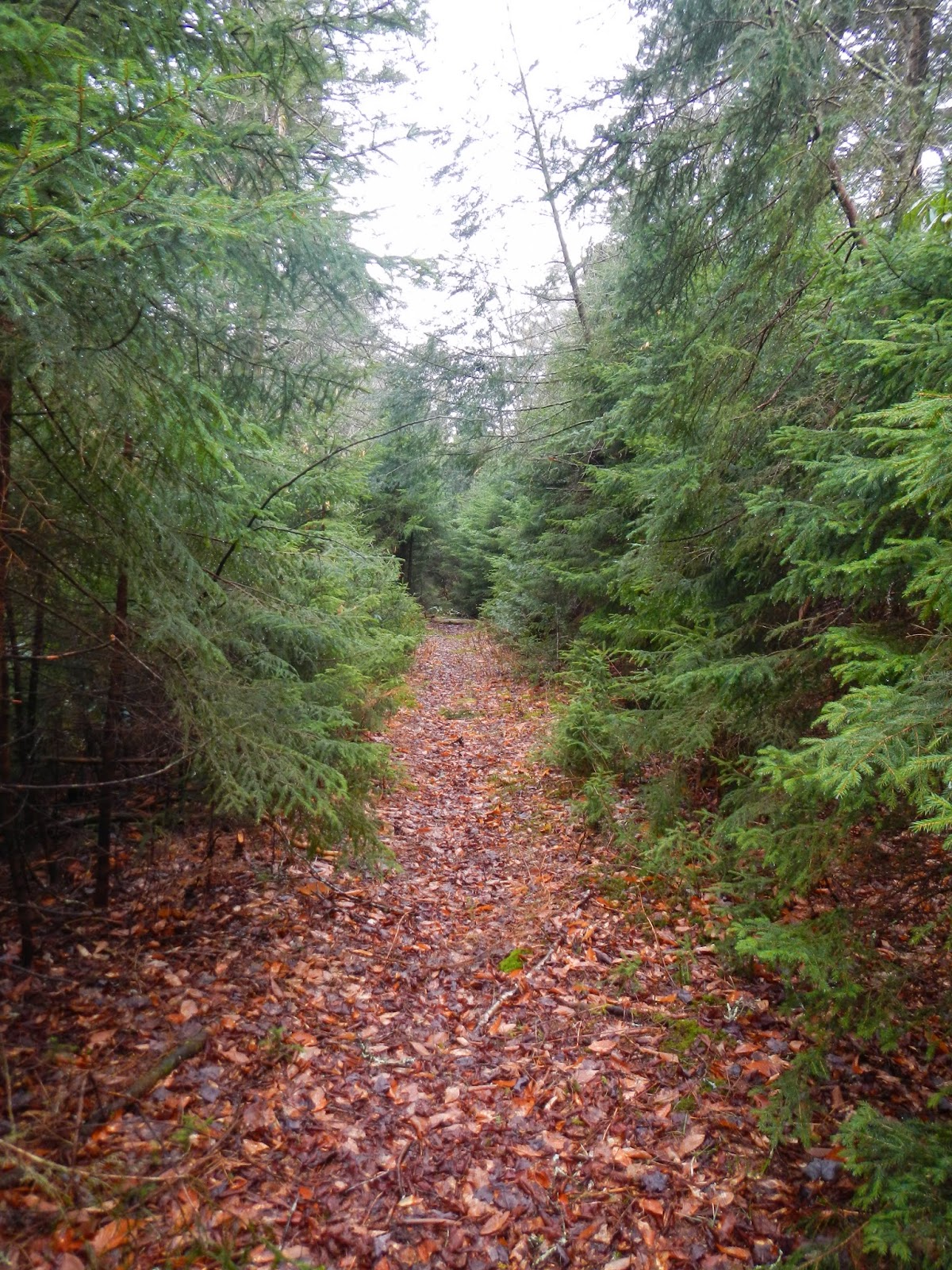 After less than a mile and a half, we came to this lovely spot with a nice large level area for a campsite.  It was raining steadily, and I felt as if I had run a marathon uphill.  I had no strength or energy.  Carl said that we should make camp for safety - my safety - and I was not going to argue.  So we set up camp in the rain.  It was all that I could do to pitch my little tent, blow up my air mattress, and crawl inside.  And that is where I spent the rest of the day for the most part as the rain came down and thunder boomed around us.  During sunny periods, Libby came out to explore and play.  She was happy to have a camp site in such a beautiful spot. 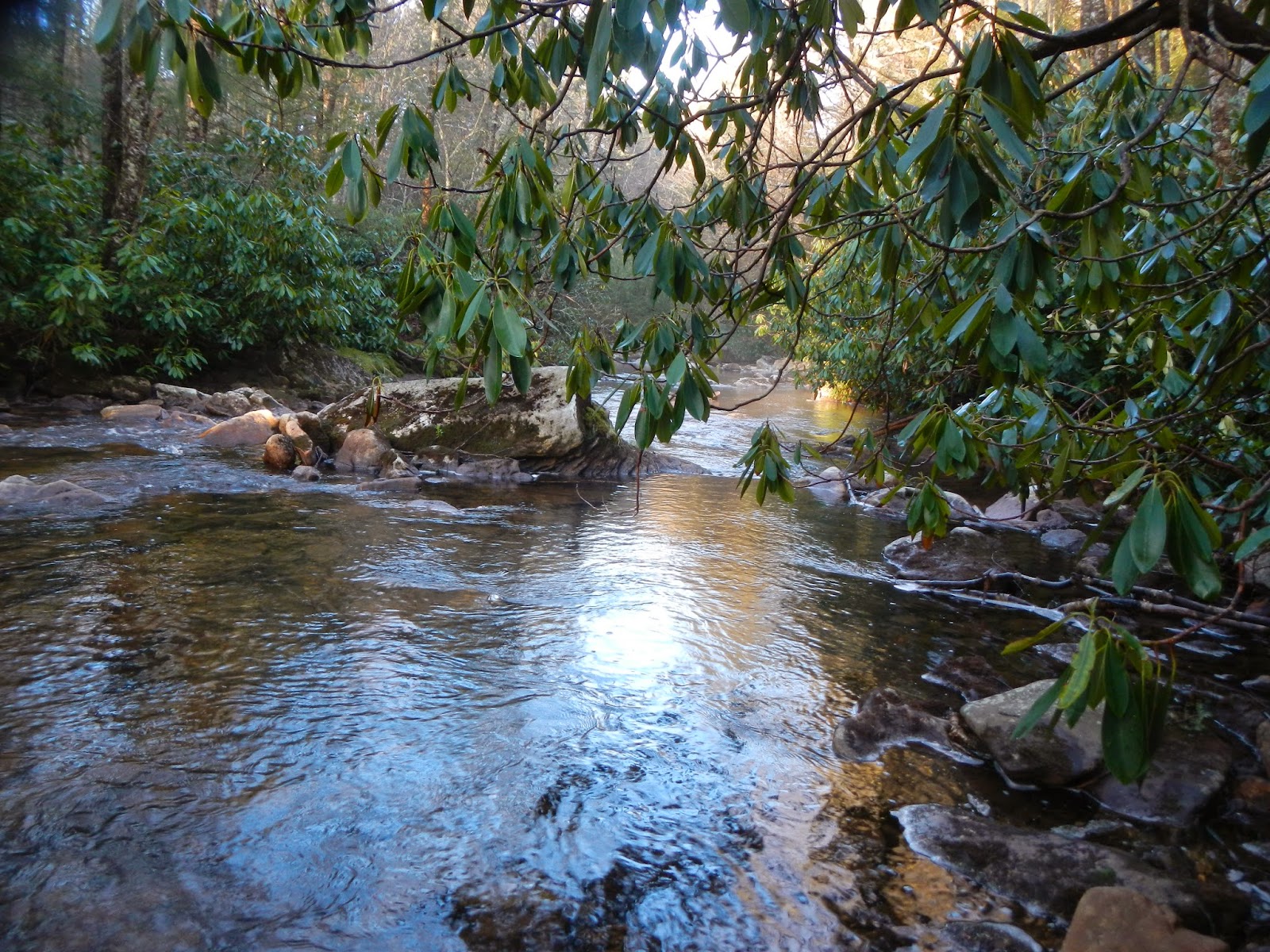 Here I am at our second camp.  This was Saturday morning, and I was not feeling as ill by then, just exhausted.  It was 32 degrees F up in the mountains. 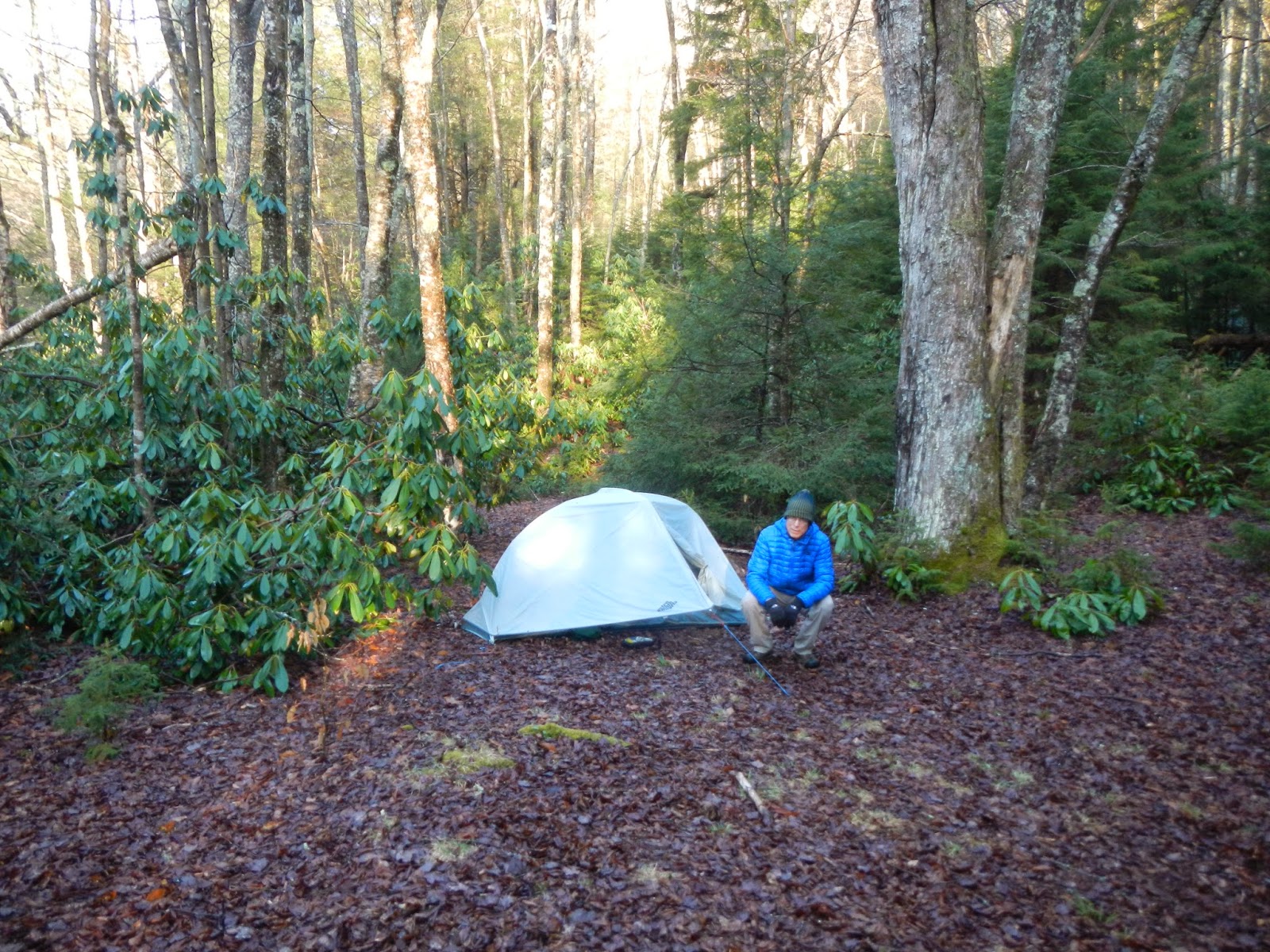 Here are my shirt and trousers, hung from the ceiling of my tent to dry - with mixed success. 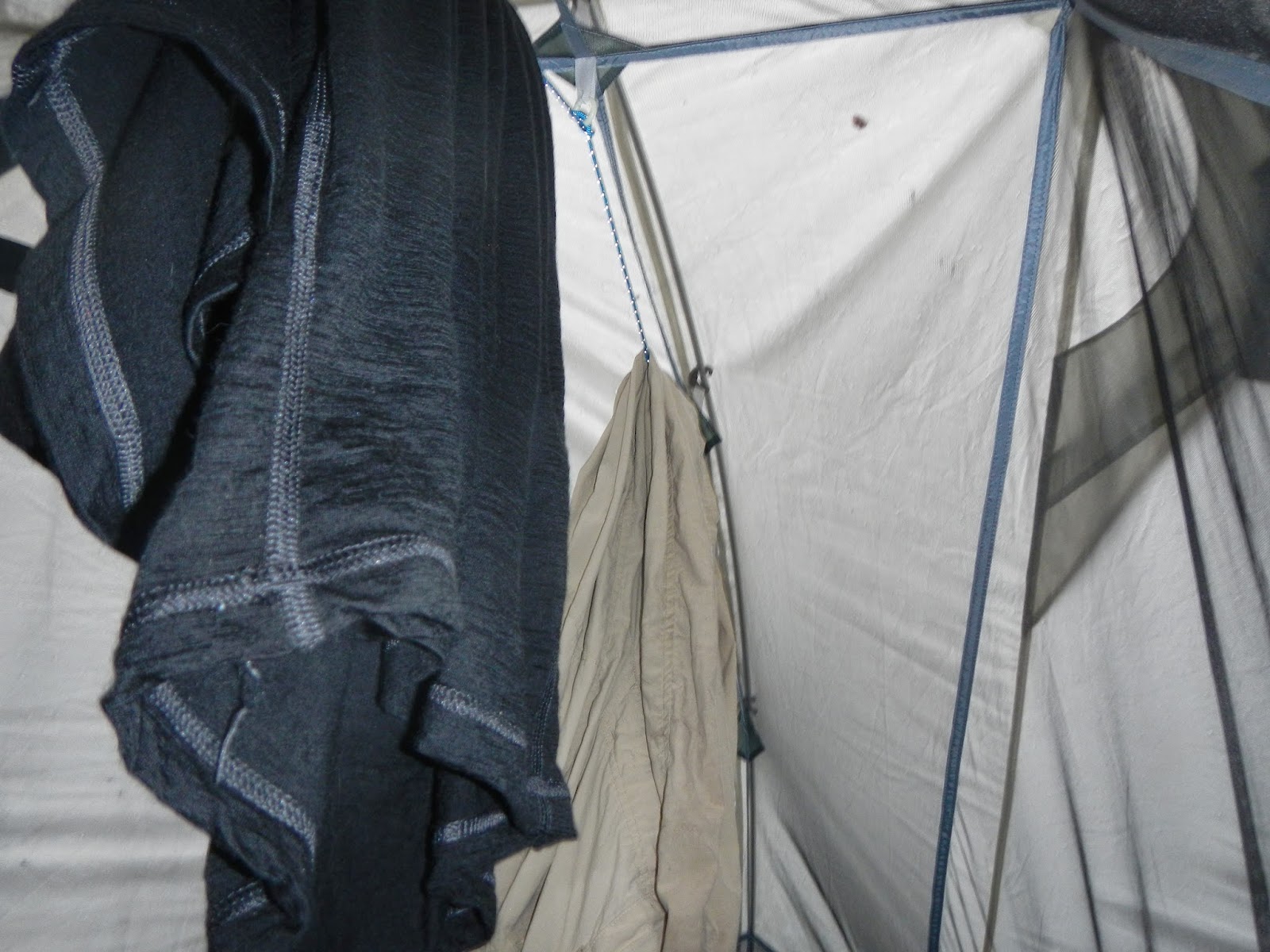 We talked about packing out in the morning, just reversing our track, but decided to sleep on it.  I actually stopped vomiting by evening and slept pretty well that night.

Read about the rest of the trip here.
Posted by o2bhiking at 2:48 AM

Email ThisBlogThis!Share to TwitterShare to FacebookShare to Pinterest
Labels: backpacking