Touring Around My Home Town

Even though I was born 60 miles west of Philadelphia, I consider the City of Brotherly Love my home town.  After all, I lived in its suburbs, maybe 8 miles from Center City, from ages 5 to 22.  I still root for all the Philly teams over anyone else.  But I don't get there often anymore.

So it was a treat when we visited Philadelphia this past weekend for three days.  I got to do a lot, and will share some photos of some of the many things I did.  I did some walking but was so busy with activities and some visiting that walking took a back seat.  Philly has way too many things going on to even scratch the surface, so I think another visit to my home town is in order soon.  So what did I do?  Check it out.

Here is the view from our room in the Sheraton, with the Cathedral of Peter and Paul in the foreground, the fountain at Logan Circle in the middle, and the Franklin Institute just beyond that. 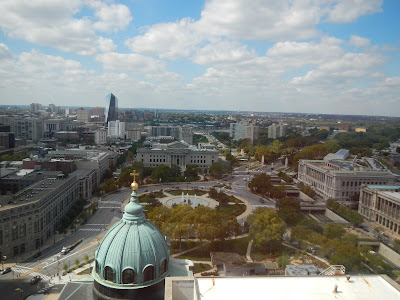 From our hotel room, we had a nice view of the Philadelphia Museum of Art, something which I must visit on another trip. 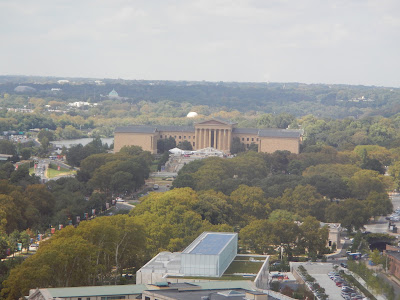 We had a treat when my step-sister Joy, who lives about 35 miles away, came in Friday afternoon and treated us to a great lunch on The Moshulu, a four-masted ship on the waterfront which is now a restaurant.  It was great to visit with Joy - a joy, actually! 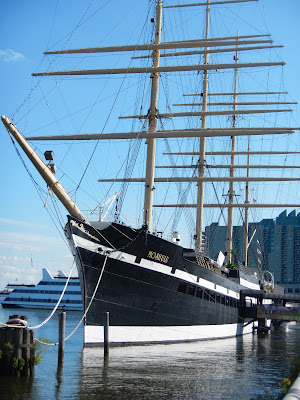 Just 100 meters or less from the Moshulu is the USS Olympia, a battlecruiser that is the only surviving warship from the Spanish - American War in 1898.  It was from this ship that Commodore Dewey gave his famous command in the Battle of Manila Bay: "You may fire when you are ready, Mr. Gridley."  The Olympia is now a great museum, as is the USS Becuna, a World War II submarine docked along side. 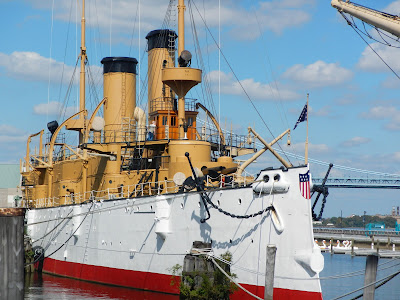 Across the Delaware River, just 45 years in era from the Olympia but light-years apart in technology is the USS New Jersey, one of the Iowa Class battleships that fought in the Pacific in World War II.  The New Jersey is now a museum also, I believe. 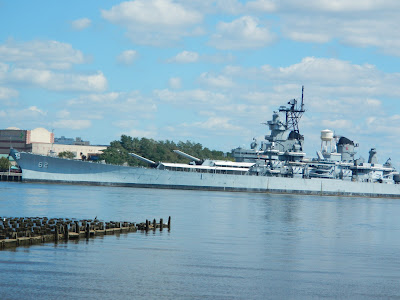 On the other side of the Moshulu is the Spirit of Philadelphia, a dinner and tourism craft.  I took a photo because I once did a consulting database job for its parent company, Spirit Cruises in Norfolk, Virginia. 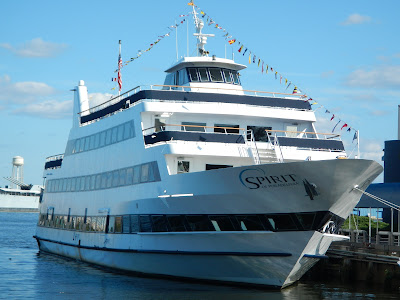 Friday night, it was time to "root, root, root for the home team" with a Phillies game in Citizens Bank Park. 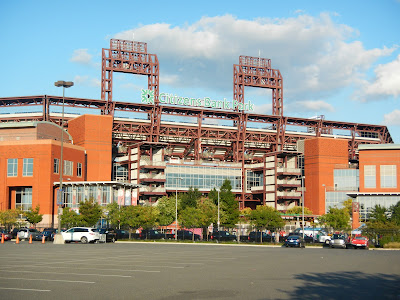 The Phillies bested the Atlanta Braves 6-2, much to our delight, despite the efforts of Atlanta's #10, Chipper Jones, who is retiring this year.  Jones is a sure bet for the Hall of Fame in five years, and played on Richmond's minor league team 20 years ago.  I can still remember how good he was in his short minor league career. 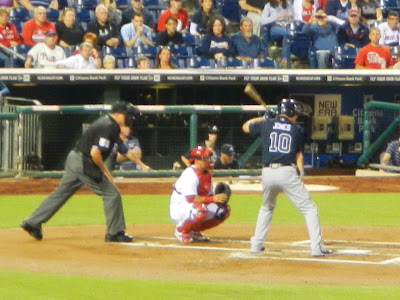 On Saturday morning, we went to the Dead Sea Scrolls exhibition at the Franklin Institute, which had more than just the scrolls.  The exhibit moves on in a few weeks, I think, and is outstanding. 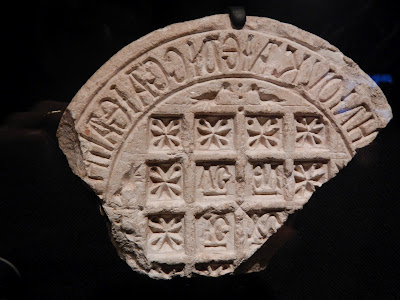 While in the Franklin Institute, we walked through the giant human heart.  Long, long ago, my sister Ann played a great trick on me in the heart, which I wrote about here.  I miss her so. 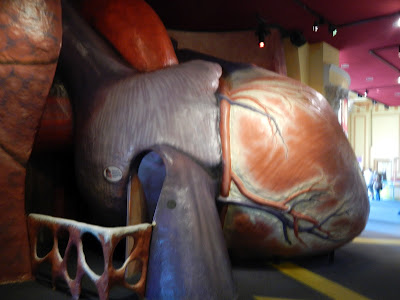 Also in the Franklin Institute is this locomotive, which weighs in at 350 tons! 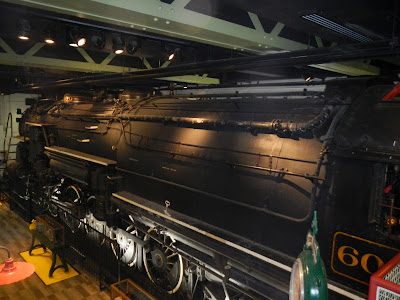 The Peter and Paul Cathedral, the Cathedral of the Archdiocese of Philadelphia, was just behind our hotel. 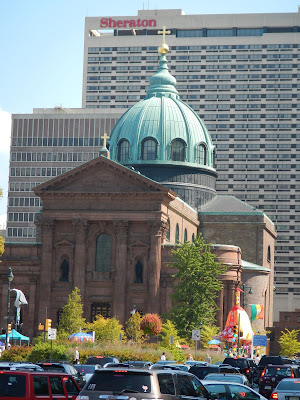 Some sort of a colorful Hindu or Hari Krishna parade was going on just in front of the Cathedral.  A block away was a Albanian Orthodox Church.  Freedom of religion (and its complementary bulwark, tolerance of the faith of others) is a cornerstone of this country, and the juxtaposition of beliefs in this place was a good reminder.  City Hall, the public face of government which is separate from religion - thank God - in this country, is in the background. 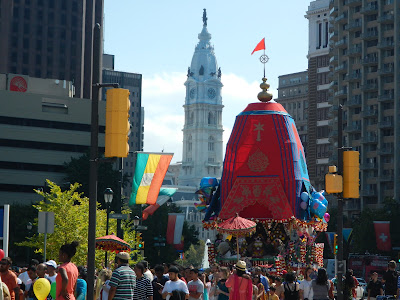 When we were kids, my brothers and sisters and I used to love to play near (and in) this fountain.  It seemed so ornate to us, and it brought back some great memories seeing this fountain. 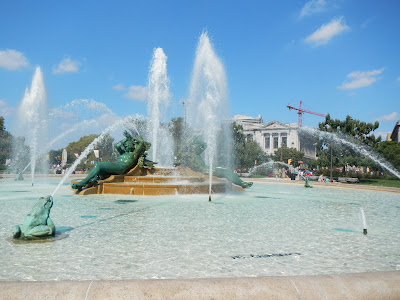 I don't have photos from the rest of Saturday, but other than lunch along a city street at a nice Thai place, we went to historic Franklin Field, home of the University of Pennsylvania oxymoronic Fighting Quakers.  There we watched the Quakers battle the Villanova Wildcats on the gridiron.  Being there brought back some great memories.  For one thing, I played one year in the Philadelphia Eagles marching band, The Sound of Brass, and at that time, all of the Eagle's home games were at Franklin Field.  For another, my step-father Stuart was a proud alumnus of the Red and the Blue of Penn, and we got together a number of times over the years to catch a game there.  Me being a Villanova grad, I had to pull for my team, but I did the cheer for the Red and the Blue at the close of halftime since Stuart could not be there.

After the game, as a huge thunderstorm rolled in, we walked a bit across town to meet my old college friend Barb for dinner and a beer.  She lives next to the Art Museum.  It had been years since we saw each other, so that was another nice treat from the visit.

This morning, I had time for a short walk.  I said "good morning" to William Penn (or "Billy Penn" as Philadelphians call him) from his perch high up on City Hall.  I wonder what Penn would think of "the City of Brotherly Love" and of "Penn's Woods" if he could see them now? 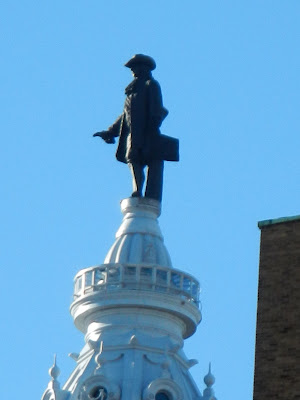 Here is one thing, as shown by the famous "Love Statue," that the world could surely use a lot more of. 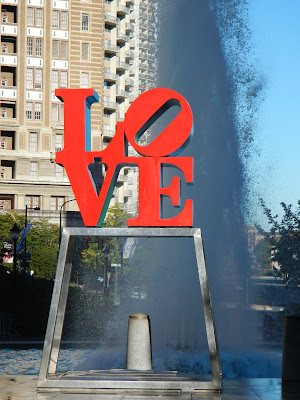 After my walk, we ended our trip back to Philly in spectacular fashion - with a visit to the Barnes Foundation Museum near the Franklin Institute.  It is incredible - one of the largest private art collections in the world turned into a fabulous museum.  It has the largest collections of Renoir's in the world - 181 works of art from this master alone.  The total number of works of art here is staggering.  My very favorite piece was in the very first room: "Girl with a Basket of Oranges" by Renoir.  A close second, for me, was "the Mussel Fishers," also by Renoir.  But the entire thing was just amazing, and I cannot recommend it enough.  Allow at least two hours, and rent the audio / vidio iPad.  I'd go again - but first, I need to do about two dozen other things I didn't have time for in my visit back in my home town.  Hopefully, that will happen soon.
Posted by o2bhiking at 5:41 PM