I know that there are people - special forces soldiers, ultra-marathon trail runners, and do forth - who can run up a steep mountain with a heavy pack, but I am not among them.  That being said, I had yesterday off, and decided that a hike in the mountains would be a good thing.  I've not been up in the mountains for a while, but have some tough fall hikes planned.  So I needed to gauge my level of fitness, see how the sore knee behaves, and do a hike with some elevation.  So I did.

Robertson Mountain is near Old Rag, and in fact the parking lot is the same for both hikes.  I was sorely tempted to hike Old Rag again after four years instead, but two factors tilted the scales to go up Robertson.  First was that I had never done this hike, and so it could add to my list of 10 new hikes in 2012.  Secondly, as I was getting ready to head up the trail, a very large group of school kids on an outing showed up.  I really didn't want to hike along with such a large group.  So Robertson Mountain it was, and a grand hike it was.  Plus, it was my sixth hike in 2012 to a new place - just four to go to reach my goal!

The total loop was just over 10 miles - 3.8 miles to the summit, and just over six miles down.  One the way up, there is a 1.5 mile stretch that climbs 1,700 feet, which is the steepest hiking I have done in a while.  That section was even steeper than the hike up to Bonanza Mines in Alaska two years ago.  The total gain was about 2,400 feet from the low elevation to high.  Very little of this hike was level, but most of it is pretty scenery - Appalachian hardwoods, some streams, and some views on the way up and from the summit.  Of the 10 miles, only about two miles or so is narrow trail (with innumerable switchbacks).  The rest is pleasant fire road, and 0.8 miles each way is actually along paved road from the trail head parking lot.

This was my first hike in the fall this year, but the weather was more summer-like than fall.  Still, the woods looked like early fall - some splashes of color, ferns turning bronze, fallen leaves on the trail at points, and so forth.  As far as wildlife, I saw a huge raven and heard its wings beat as it flew overhead at tree top level.  I saw a tiny brown bird flit into the underbrush.  And I saw lots of six legged friends (a few of whom were hopeful of a refreshing meal of my blood), a daddy longlegs, and a big millipede.  That's it.  There are bear in this area and I saw some very old sign, but not the bruins themselves.  Other than the part of the trail that joined the return from Old Rag, I didn't see a single other human during the hike.  I did capture some photos, some of which I show here.  First, let's start with images from my DeLorme Topo North America software, with input from my PN-60w GPS by DeLorme.  Here is a topo map of my route, expressed as a 3D image.  I started and ended at the arrow on the right, and went counter-clockwise up the steep slope on the circuit part of the the hike: 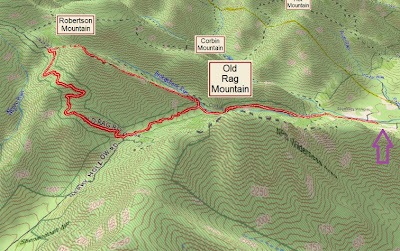 Near the start (and end) of the actual route once I left the road from the parking lot is this little "pebble."  It is as big as a small house, and there is nothing else like it nearby.  I'd love to know how it got here. 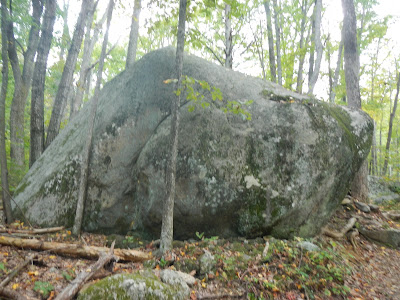 On the hike up Robertson Mountain's slopes, there was this pretty area - fairly level, with the start of fall color. 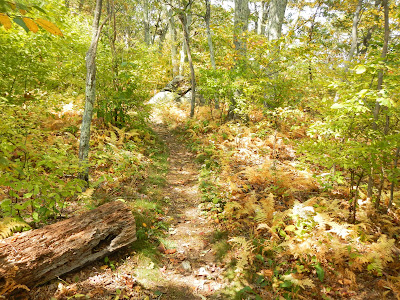 At the summit of Robertson Mountain. 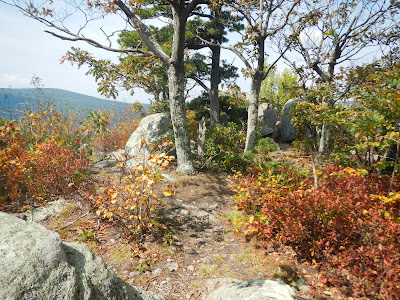 This is a panorama looking southwest and west from the summit.  The main part of Shenandoah National Park, and the Skyline Drive, runs along these ridges.

The distinctive shape of Hawksbill Mountain marks the highest point in Shenandoah National Park at 4,050 feet, nearly 800 feet above where I stand. 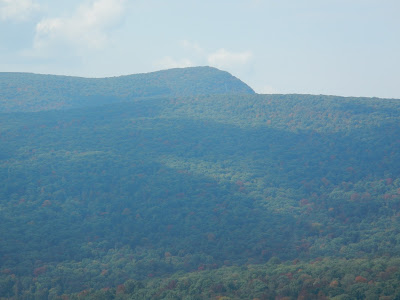 This panorama looks northwest and north from the summit.  I had to climb on some big rocks to get a clear view. 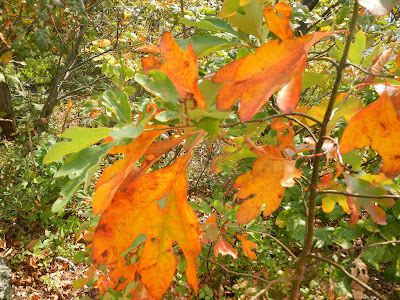 The hike down spent most of the time on the scenic and easy to walk Old Rag Fire Road.  It went steadily downhill but was not steep.  What took less than four miles to ascend took more than six miles to descend. 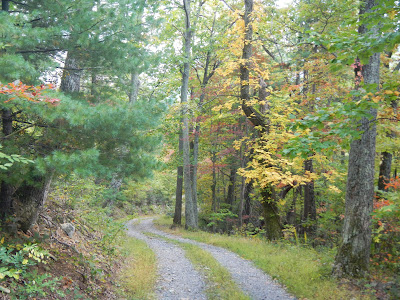 Leaves aren't the only thing that are colorful in the fall.  These flowers marked the Team in Training colors of purple, green, and white. 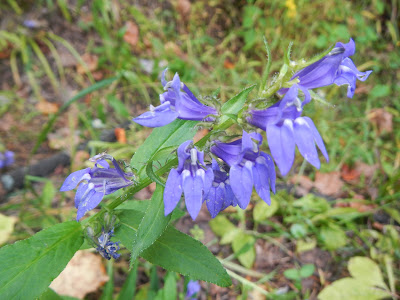