I was in Michigan (plus lots of driving to and from) for the week to visit my granddaughter and daughter-in-law.  One fine afternoon, we decided to take kayaks on an out and back up Victoria / Cedar Creek, which is one of the inlets for beautiful Lake Leelanau.  It would be about 3 to 4 miles each way to reach the lake.  If it had just been Sarah and I we might have gone that far, but with a little kid, you have to be pretty aware of what they will tolerate.  We went about 1.2 miles each way, which was maybe about .4 miles more than my granddaughter's tolerance for outdoors fun.  But that's okay, because it was a beautiful creek on a gorgeous day.  We saw painted turtles, a northern water snake that swam so close to my kayak that I was able to easily reach over and pick him up, many ducks, kingfishers, and lots of scenery.  Here are some pictures.

Our route, out and back, starting and ending at the upper left and following the stream maybe 40% to the lake: 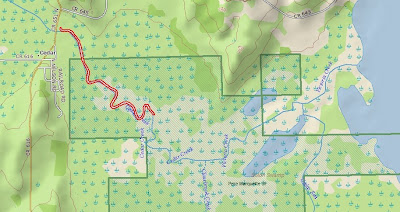 Near the start of the trip. 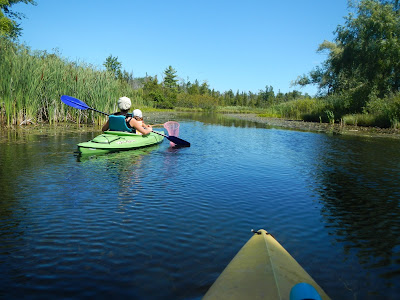 Mother and daughter kayak along, one paddling, one ready with her net. 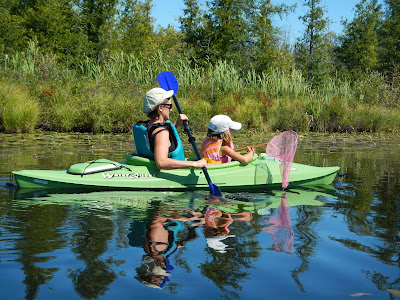 I think this was a mother with two young ducks, not quite ducklings anymore but not old enough to be alone either.  Since ducks usually have about 8-12 young, I imagine the others are in the bellies of foxes and minks. 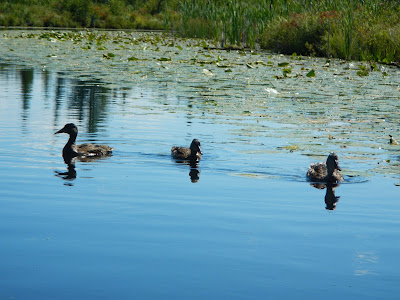 It is delightful to see a young child excited about the natural world, like this painted turtle.  She wanted to keep it but was persuaded that the best place for it was his watery home. 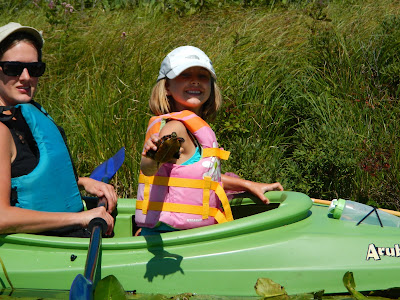 The entire stream that we kayaked on wild like this - no homes, cottages, or docks.  Just pretty scenery.  Just the way I like it! 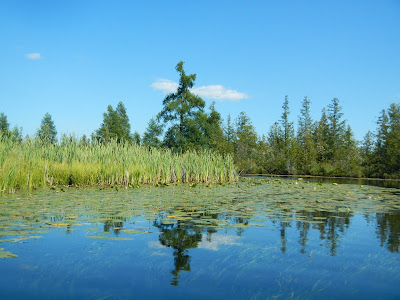 This vivid water lily flower was too tempting to pass up. 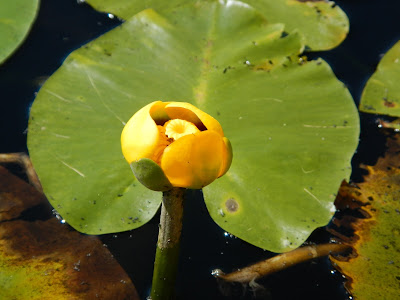 You can click on the panorama for a full view.

My granddaughter caught this little green frog at the end.  She put it on the grass so that she and her mom could look at it.  As they knelt down to look at the frog, I was busy getting gear organized, but I happened to glance up.  At that exact instant, a large (30 inches at least) water snake was moving just behind them, less than a meter from their feet.  But their backs were turned.  I shouted several times for them to turn but by the time they did, the snake had squeezed between two boards on the dock and was gone.  My granddaughter was sure that I was kidding her, because I sometimes do joke around, but not this time.  I am sorry they missed it, as my granddaughter is fascinated with snakes. 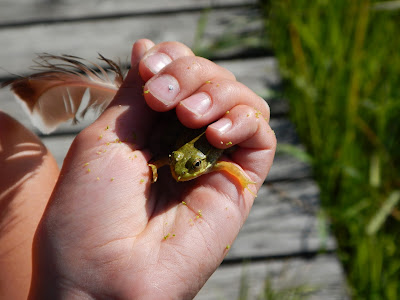