Sunday being a gorgeous fall day, it seemed like a perfect time to head to the mountains for a hike.  So I asked a friend, Matt, if he wanted to go, and we headed up to Shenandoah National Park for the day.  It is hard to believe that it was my first time there in 2013!

There are over 500 miles of hiking trails in the park, including more than 100 miles of the Appalachian Trail.  Someday, it would be fun to hike all 500 of them, but Sunday, I picked out a six mile loop, Buck Ridge and Buck Hollow.  The map below shows this route.  We started and ended at the orange arrow on the lower left, and hiked counter-clockwise.  We headed out on the Buck Ridge Trail, which had a few level sections but was mostly downhill, and came back up through the long, uphill slog on the Buck Hollow Trail. 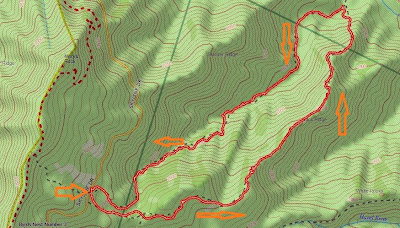 Here is the elevation profile (click for a better view).  We lost and gained about 2,100 feet.  Just before we reached the turn around point, where the Buck Ridge Trail intersected the Buck Hollow Trail, we descended about 500 feet in a quarter of a mile.  It was very steep there, and the trail crew had put in a seemingly endless series of log steps.  Both Matt and I have sore knees from running injuries, so it was difficult at times.

Before we started hiking, we stopped at an overlook and I got some photos of the foliage from on high, 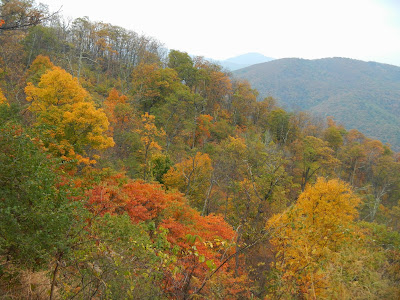 as well as the hollow that we would descend into and the ascend from.

Then, we drove to the trail head and started hiking, beginning with gloves and jackets in the cool mountain air.  Before we had gone much more than a mile or two, jackets and gloves were in our packs.  Here is the Buck Ridge Trail near the start of the hike. 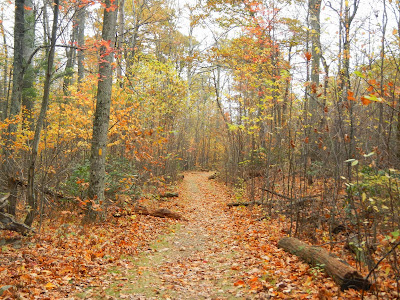 I love the flashes of red in the autumn woods.  They are not as common in Virginia as further north, but are a real treat to me when I find them. 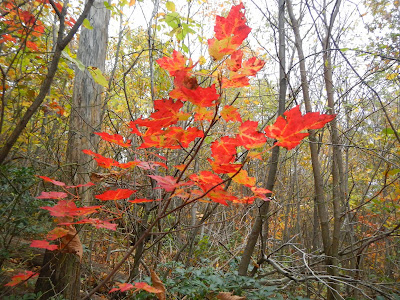 Matt holds a huge maple leaf (I think) about a mile into our hike. 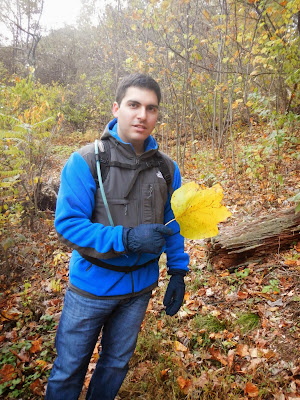 We had some partial views from Buck Ridge as we hiked.  This one looks across the hollow that we would ascend through later. 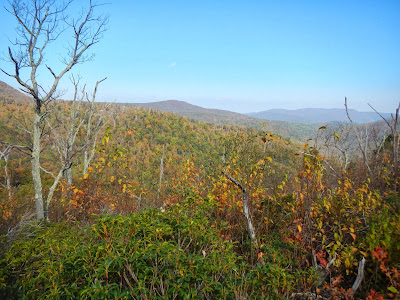 Everywhere we walked, the glories of Mother Nature were obvious. 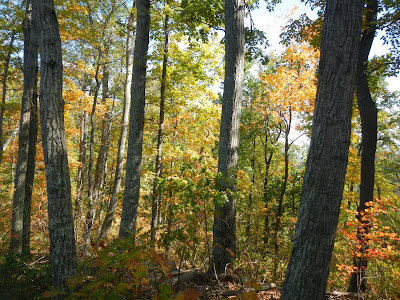 Once we reached the junction of Buck Ridge Trail and Buck Hollow Trail, we stopped for lunch.  Matt's knees were killing him, and there was a place he could have hiked out to a road here for later pickup, but he said he would continue hiking.  It was at our lunch spot that a large yellow jacket crawled up my pant leg for some reason and stung my knee.  I am sure I presented quite the sight stripping off my trousers and trying to find out what it was that had caused me so much pain!  Eventually, I figured it out, but by then, my knee hurt a lot for the rest of the hike.

It was shortly after lunch that we encountered a beautiful stream, which was our companion for most of the uphill hike out. 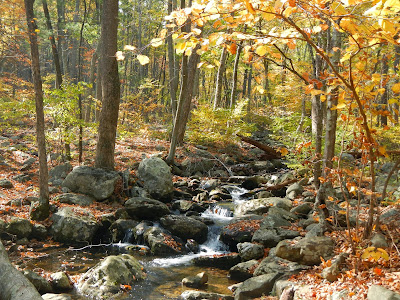 Here is another shot of the stream, forming a little waterfall of sorts.  This happened over and over.  It was pretty, and the sound very pleasant. 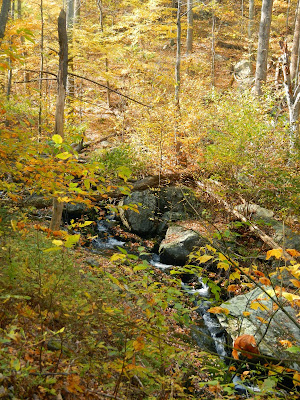 We both were tired when we got back to the car, and marveled at the two guys we saw running the trail - four times!  That is 24 miles of running on rocky and fairly steep trails, with over 8,000 feet elevation gain and loss.  Hiking it once was enough exercise for me.

I had a great hike, and it was wonderful to return to Shenandoah National Park.  This was my eighth new hike of 2013, so I have two more to reach my goal.  Now that my half marathon is in the past, I hope I can make that happen.  Training for a race like that consumes a lot of time and energy! (But compared to running the trail today four times, a half marathon seems kind of wimpy!)
Posted by o2bhiking at 6:40 PM