Isle Royale - Getting Back to Rock Harbor

We were on the trail Thursday (September 20) by 8:30.  Our goal was to hike the 7+ miles back to Rock Harbor by noon, before the storm came in, and get a shelter for the six of us.  We figured that few people would be in Rock Harbor on a Thursday.  Here was the track, starting at the red arrow and ending up at the purple arrow.  When we got to Three Mile, we headed up the Mount Franklin Trail to the left and then turned right on the Tobin Harbor Trail, which was a very easy and smooth trail.  We'd taken the Rock Harbor Trail outbound the Saturday before, and it was rocky and more difficult.  We wanted speed, plus we got to see new scenery by being on a different trail. 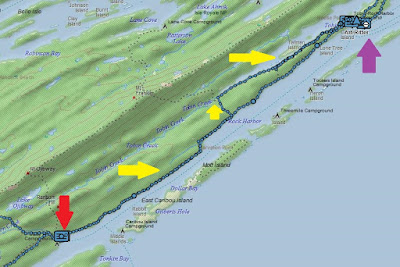 These trails that go through tall forests always remind me of a cathedral. 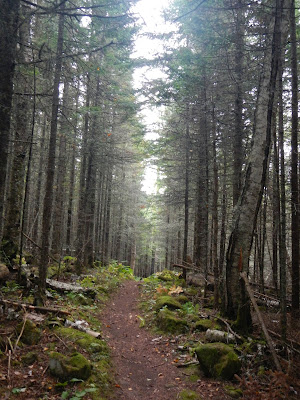 We didn't see much fall color, but these ferns were rather pretty, and 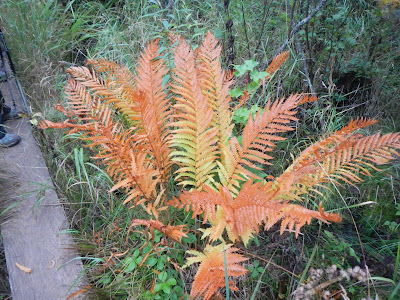 I also liked these mushrooms. 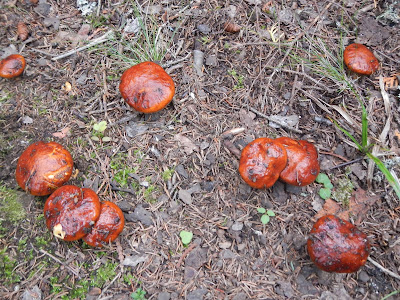 The hike along Tobin Harbor was very scenic.  It reminded me, again, of the Maine Coast, with its islands and and spruce and fir trees. 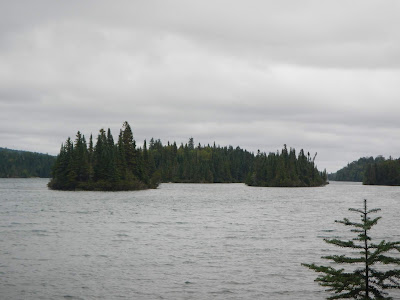 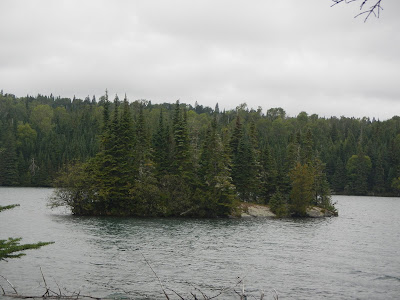 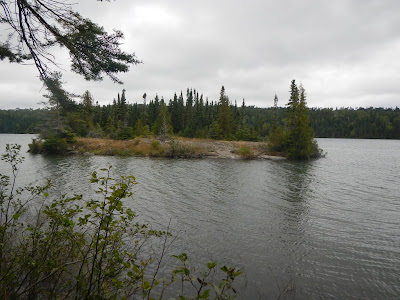 We got to Rock Harbor before 12:30, and were shocked that every shelter was already taken!  What the hell?  But one of them had one guy in it (Neil, who was a kayaker and turned out to be a great guy), and he said that some of our group were welcome to stay in his shelter.  Across from his shelter was one with just two people in it, so I asked if they could add two more.  They had moved the picnic table in there, which I don't think the park really wants, but they agreed.  They had their tent set up in the shelter, so Barbara and I decided to set up our little tents as well for some privacy.  It took some maneuvering and jury-rigging to make it all fit, but we did. 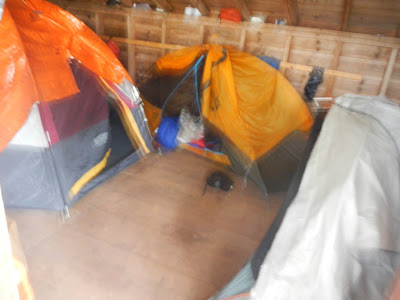 I walked to the park office, which was closed.  They had posted the weather report, along with a notice that the ferry might not be able to run Friday.  That determination would be made in the morning.  There was a gale warning for Thursday and Friday, and there would be very heavy rain coming in later.  I went back to the shelter, and was checking my food, when one of my mates came by with a big paper bag.  "What's that?" I asked.  "Food!" he said.  "They've opened the store."  Since I only had one dinner, one breakfast, and a power bar left, I was very interested in this unexpected windfall.  I ran down there and got two backpacking meals (in case we got stuck Friday and Saturday nights), some power bars, a box of raisins, candy bars, some cookies, and two ice cream bars (which I ate walking back to camp, one in each hand.)  I went back later and bought a couple of books from the park visitor center, which also opened for a little while because of the storm and probable delay.  It felt great to have more food, as well as something to read, if we got storm-bound.  What unexpected pleasures!

As the rain held off all afternoon, I took some short walks and admired the scenery around Rock Harbor. 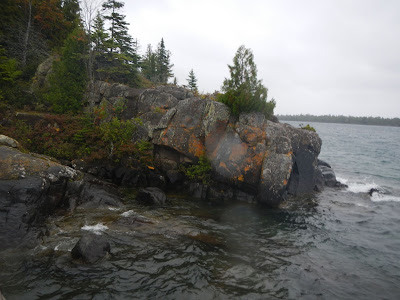 I also saw some impressive waves crashing on the rocks at the edge of the harbor.  Shortly after dinner, the rain started and it increased.  I got into my tent, snug as a bug, read for a while, and finally turned my headlamp out.  I wondered if the ferry could run the next day, and finally stopped worrying about it.  What would be, would be.

Prior Story: Hike Back to Daisy Farm
Next Story: An Extra Day on the Island
Posted by o2bhiking at 7:36 PM