I resolved to go hiking Wednesday, and I felt that it was time to visit The Priest.  Not a priest, The Priest.  Here is what Hiking Upward has to say about this hike to The Priest from the north: "Many folks express great fear when thinking about hiking The Priest from VA 56. Although The Priest isn’t found on the list of the 50 highest mountains in Virginia, it rises straight up from the valley floor and forms part of an impressive skyline when driving in from the Tye River Valley. This hike involves a 3000 foot elevation gain (higher than any trail in West Virginia), however the trail is seldom steep along the way, and can be better characterized as “unrelenting” rather than difficult.  Once the trail starts climbing, it maintains a remarkably constant 13% grade for 3.6 miles before steepening slightly for the last 0.3 mile to the summit."

Actually, the elevation gain is 3,117 feet - just saying!  I had heard tales about this hike for a long time, and was in the camp that kind of feared it.  But then again, I knew that it could not be as hard as the White Mountains, where I had a number of really long days over steeper trails with large boulders thrown in. I'd actually been to The Priest before, on my first trip where I resumed backpacking after a long gap, but I'd approached the mountain from the south where it is not as much of a climb.  The two things that I remembered most from that hike was the very cold night on top of the mountain, and the simply amazing stars.

After a drive of about 115 miles from my house, I got to the Appalachian Trail parking area at the Tye River Gap, and immediately hiked into The Priest Wilderness Area. 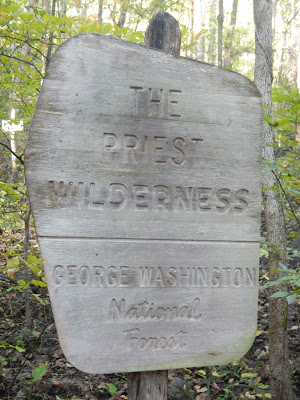 Here is the route, starting and ending at the red circle.  The red arrow points to my turn around point, and the blue arrow shows the location of the shelter, which I did not hike to this trip.  My Garmin inReach tracked the hike at 9.3 miles, but Hiking Upward has it as 8.6 miles. 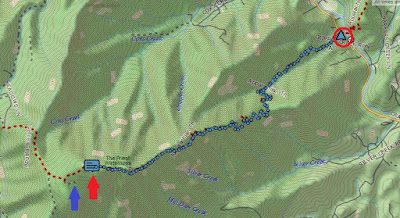 The elevation profile from Hiking Upward matches the description - steady uphill, and steady downhill once one turns around.  The summit is flat, and I walked to where I camped 8 years ago, which has great views.  The approach to the mountain is much steeper for the last half mile of the hike up. 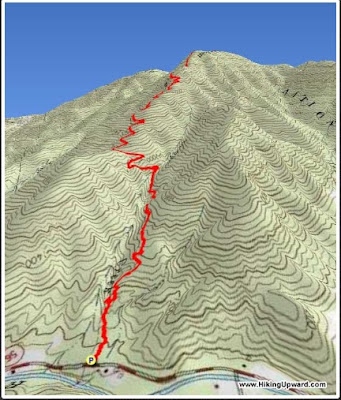 I really liked this hike.  It was a beautiful, cool October day, and unlike Pennsylvania a couple of weeks ago, the colors were starting to change.  It was a steady uphill climb, but the lower part of the hike didn't have a lot of rocks or roots to trip over, and I made steady progress. 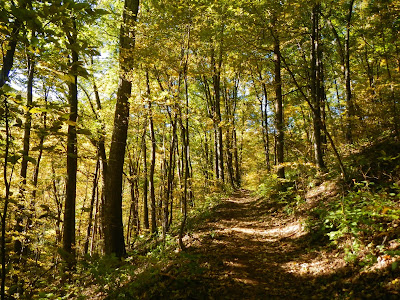 Lovely Cripple Creek had a kind of water slide, which I was not tempted to try.  This is the last source of water on this hike. I carried two liters, which was more than enough on this cool day. 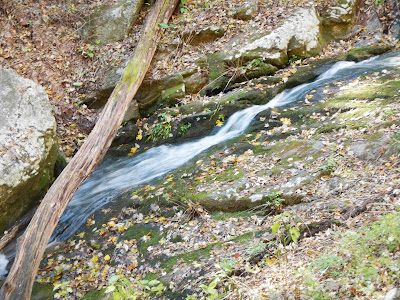 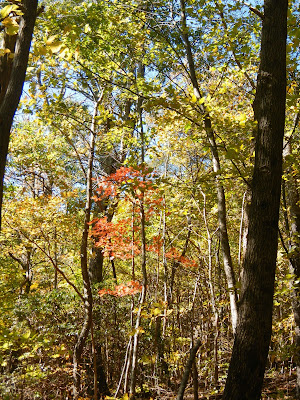 By this point, I had gained nearly 2,000 feet in elevation and was rewarded with a great view.  It had taken me about 2 hours and 15 minutes to reach this point, and I had come about 2.6 miles, including short breaks for photos. 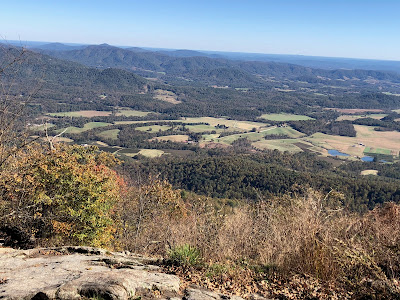 This tree was so stark against the sky.  It was once a living thing. 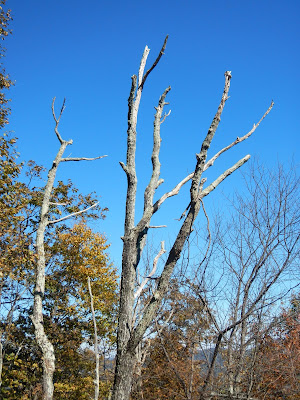 It took me a good while to go the last mile or so, as the terrain got steeper.  I encountered a man hiking north along the AT with a big backpack.  He was midway through a week long hike.  He said "I am sure that I'm enjoying this more than you are," referring to the steep climb that I was in the middle of.  Eventually, I did reach the summit, which has a nice flat part for a while.  If this were West Virginia, a summit at 4,000+ feet would be covered in spruce and fir, but not here. 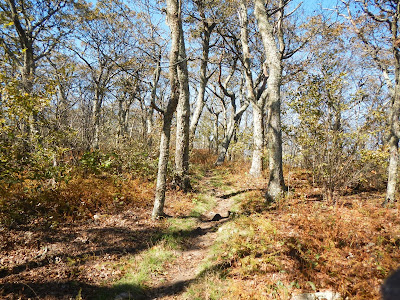 I walked until I reached the area where Hawkeye and I had camped that cold, starry night in 2010, then walked out onto the rocks with the great views, and ate lunch.  A couple of dark-eyed juncos came within five feet of me as I munched on my sandwich, but I could not get their photo.  Other than a gray squirrel, they were the only animals that I saw on the hike.  It was cold and windy on the summit of The Priest. 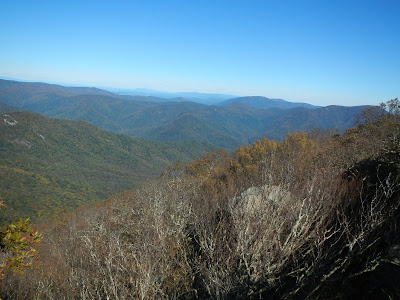 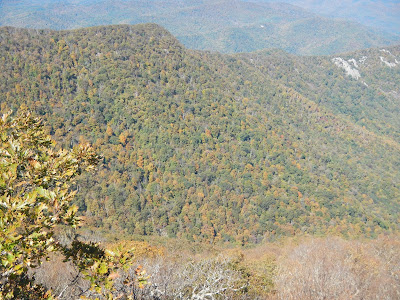 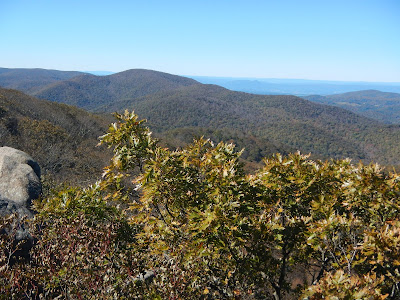 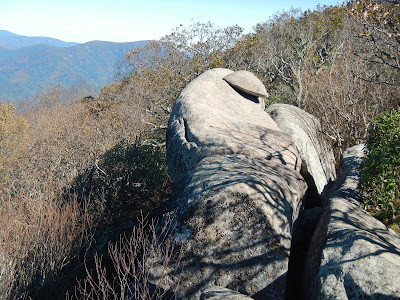 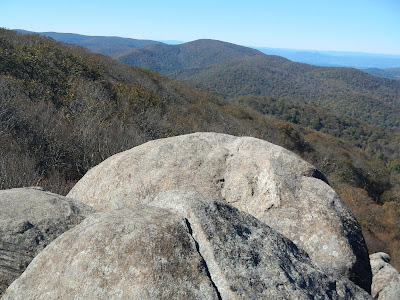 The hike down looked exactly like the hike up.  Once I carefully got past the steepest section, I made really good time.  It took me about two hours and 15 minutes to get back to the car as I steadily lost elevation.  My car was at about 950 feet elevation, the summit is about 4,062 feet. 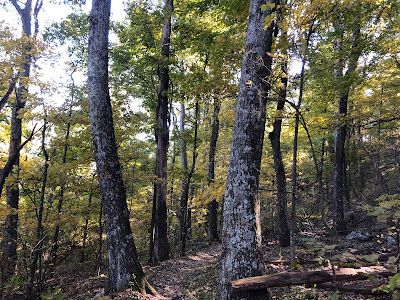 I was glad to visit my old friend, The Priest, this time from a more challenging direction.  Although this was not an easy hike, I think that I am in better shape than I realized, because it never felt too hard, and I never felt like I needed a priest for last rites.  Was it a religious experience seeing The Priest?  Well, I never feel closer to God as when I am out in nature, so, yes it was!  I was in God's Cathedral!  So, do not fear The Priest, as many hikers apparently do.  Go out, climb, and enjoy the day and the experience!

As a post script, I heard a few birds that I did not see: Carolina or black-capped chickadees (probably the latter up this high), pileated woodpecker, downy woodpecker, and red-breasted nuthatch.
Posted by o2bhiking at 3:48 AM