Planning a Hike Along "Virginia's Rooftop"

It took me a while to get permission, but in early October, my boss approved me taking off two days so I could go on a four day backpacking trip.  My friend Chris and I had previously narrowed down our hike to the Mount Rogers Recreational Area in Southwest Virginia - just in case I was cleared to go.  We had also considered the Laurel Highlands of Pennsylvania and Dolly Sods in West Virginia.  All of these areas are about a five hour drive from our homes - actually, Mount Rogers near Grayson Highland State Park is about a six hour drive.

Mount Rogers is the highest point in Virginia at over 5,700 feet, and is also the highest point on the east coast between the Great Smokies and the Whites.  It is also the highest state high-point east of South Dakota that one cannot drive to.  Mount Rogers itself is covered in forest with no view - a forest much like that of southern Canada.  But parts of the area are balds with great views.  Most of the hiking there is over 4,000 feet, which is about where Shenandoah National Park, my usual mountain stomping ground, tops out.  A couple of herds of wild ponies roam over the mountains here.

We decided to leave right after work Wednesday, drive five hours to Marian, and spend the night in a motel.  Then we'll get to the trail head to start the hike as early as possible Thursday, hike full days Thursday, Friday, and Saturday, and end the hike on Sunday with maybe a half day hiking and the long six hour drive home.  Thursday's hike will start with a leg stretcher around the Cabin Creek loop in Grayson Highlands State Park, then we will head south on the Appalachian Trail towards Mount Rogers.  We'll set up camp near the Thomas Knob shelter, then hike a mile up and back the mountain.  Friday, we'll leave the Appalachian Trail and head north on the Mount Rogers Trail through the Lewis Fork Wilderness, eventually looping south on the AT again and staying at the Old Orchard shelter.  Hopefully the spring will be running there for water.  Saturday, we'll make out way by various trails east to the Little Wilson Creek Wilderness, and camp for the night near a stream.  This is one of the least used parts of the Mount Rogers NRA, and it looks fantastic.  Sunday, we'll complete our loop - which I estimate at about 30 miles - by heading west back to Grayson Highland State Park, where we will leave my car.

As I write this the Tuesday before I go, the weather is looking great - highs in the upper 50's and lows in the mid-40's.  So unlike my last two trips to the Priest and to Trayfoot Ridge, I shouldn't freeze, and in fact, I'll be taking my lighter sleeping bag to save weight and bulk.  There is about a 0 to 20% chance of rain on four days of my trip as of this writing, so that looks great, too.  I am really looking forward to the hike.  I've been getting my gear organized, working on my part of the menu, and doing some planning.  My pack is all packed, and all my meals (I'm providing five of the 10 meals, my friend is providing the other half) are organized and measured.  My pack weighs in about 36 pounds without water, which is a little more than I would like.  (Actually, what I would like is someone to carry it for me.  Any volunteers?)  The good news is that each day that goes by, the pack will get a little lighter, as about seven pounds of the weight is food.

By the time this posts automatically on October 14 (which it would have if I had published the post and not just saved it), my trip will be over and I'll be back home!  With more to come here, of course, so stay tuned.... 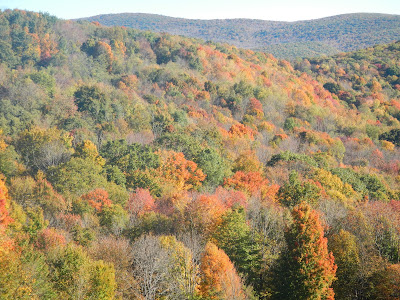