Zuppa - Hiking to the Top of Mount Rogers

October 11
In my four day backpacking trip in Mount Rogers National Recreation Area, patterned after an Italian feast, I guess I'd have to say my favorite "courses" were the "salad" (Hiking in Virginia's High Country with its incredible views) and the "soup" (this post, where I actually hiked to the top of Mount Rogers- 5,729 feet, - the highest point in Virginia).  It is also the highest point on the East Coast between the North Carolina mountains and the White Mountains in New Hampshire.

Originally, Hawkeye suggested that we hike to the summit just before sunset, catch the sunset, stay for the stars, and hike down in the dark back to camp.  But I convinced him that because there is, paradoxically, no view from the top of Mount Rogers, that it made more sense to hike up and back in daylight and catch the sunset and stars from camp.  By the time camp was all set up, it was about 5:15, and sunset was about an hour and a half away, or even a little less.  Hawkeye decided not to go to the summit, but I was determined to.  I hadn't stood on top of Mount Rogers since I was a graduate student, where I backpacked here once with two friends and we reached the top.  Also, I had come here a year after that with my ornithology class on a field trip.  I didn't feel that this hike would be complete without standing on top of this mountain once again.

So I stuffed some emergency supplies in my nearly empty pack and started hiking.  I didn't see any problem covering the hike, less than two miles, before dark, and it wasn't a problem.  Here is a three dimension topo representation of my 1.7 mile hike to the top and back, marked in yellow. 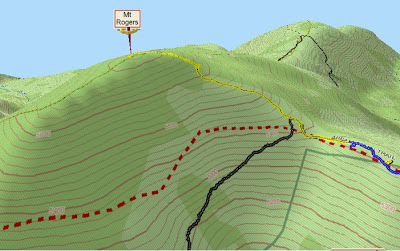 Here is the elevation profile for the out and back from camp.  We were camped so high up at about 5,400 feet that it was a pretty easy hike to the top and back.

As I left camp, I had nice open views behind me, to the south. 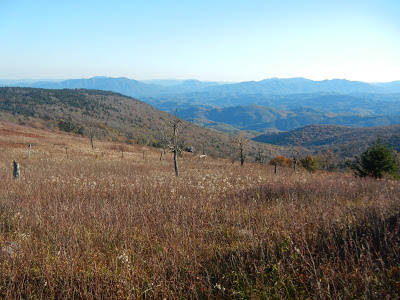 Gradually, I began to come on to and pass evergreen trees, 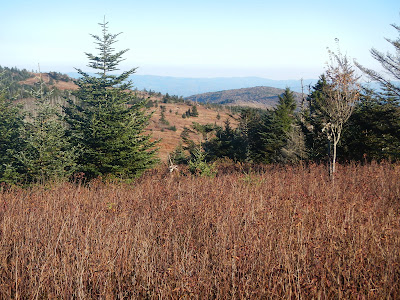 until they became the dominant species of tree.  I am not sure of the exact species, but they had the needle structure and scent of spruce or fir - Fraser fir and red spruce, according to Wikipedia. 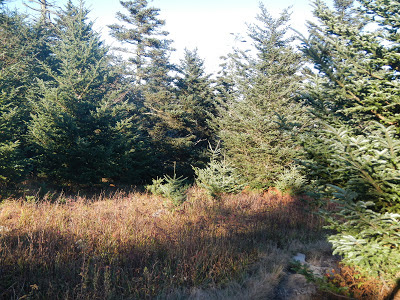 The trail abruptly left the open area and entered a dense spruce - fir forest.  The scent was intoxicating, and the views reminded me of parts of Maine - only about a thousand miles away. 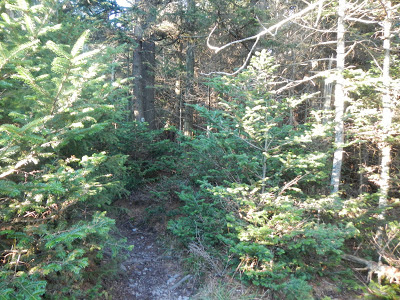 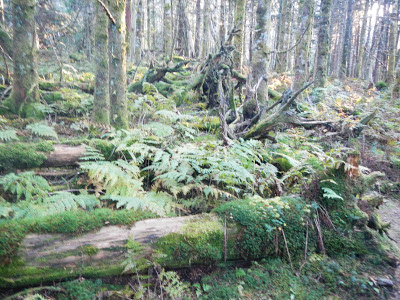 Although it may not look impressive, this is the highest point in Virginia, 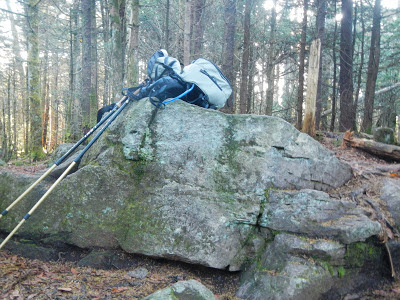 And this National Geological Survey disk proves it.  I wish I had put my camera on the rock and taken a picture of myself. 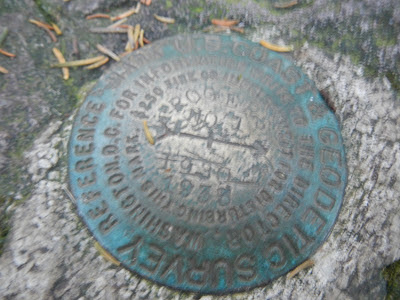 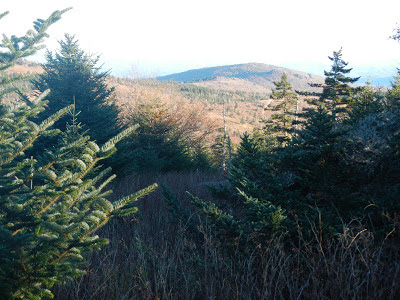 Back at camp, we ate dinner as the sun set, giving us beautiful views of the mountains at dusk.  Then, as the winds whipped by at 20 - 30 mph, we lay on the ground and watched an amazing star-lit sky.  With no light pollution, it was incredible.  The Milky Way looked like clouds, and we could see satellites go by overhead.  I stayed out until I got too cold, then slipped into my semi-warm sleeping bag, shivered for a while, and eventually slept a few hours as the wind buffeted my tent all night long. 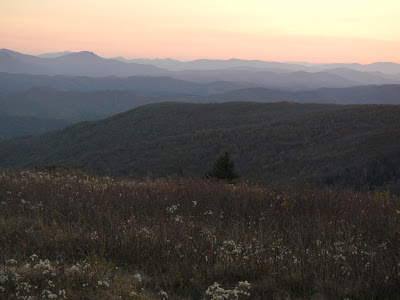 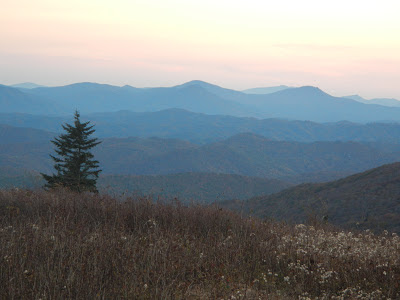