I saw this creature - one I very rarely see - on last Friday's hike to the Doyles River Falls.  It was thrilling.  Can you guess what it is? (Or get very close, because actually, from the clues, there are two answers.)

Just like you have, I have a spine
But as to legs? Those are not mine!

No hands or feet, but trees I climb
I’ll reach that bird’s nest in no time!

I “taste” the air with my forked tongue
And breath it with a single lung!

I’ll reach about five feet in length
I’m slender, but have lots of strength

Oh, please fear not, but rat or mouse
Should fear my visit to their house

And baby birds, snug in their nest
Will find me far worse than a pest


Although there could be some mistake
I think this is a black rat snake!

I saw this snake just off the path, near the Doyle's River well above the falls.  It was still cool temperatures, and the snake was slow.  He was over 4.5 feet long, or about 1.5 meters: too long to fit completely in the photo frame with any clarity. 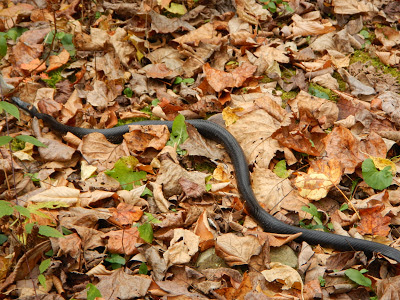 I slowly approached so as not to scare him, and got another photo. 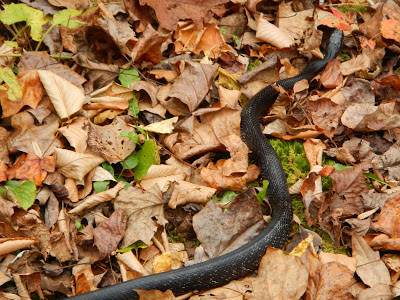 And then, closer still for another photo.  Then he slowly slithered away and down a steep embankment.  I didn't attempt to catch him.  I didn't want to stress him or accidentally cause him harm.  It was thrilling enough to see this rarely seen creature, and to get his photo.  What a beautiful animal! 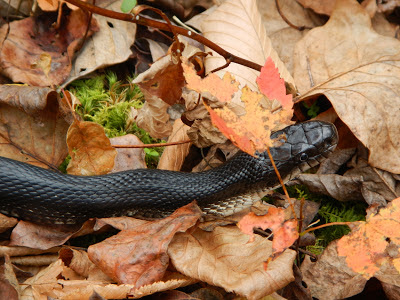 This could have been a black racer or a black rat snake.  I am going for the latter.  My herpetology field guide says that black rat snakes are sometimes called "mountain black snakes" because they range all the way high up in the rugged Appalachian Mountains.  What do you think?  The differences are subtle and you pretty much need the field guide with you and the snake in hand to tell the two species apart.

Less than thirty minutes later, I saw another - about as long as the snake but much bigger - creature that was jet black.  That was also thrilling!
Posted by o2bhiking at 9:42 AM

Email ThisBlogThis!Share to TwitterShare to FacebookShare to Pinterest
Labels: poetry, snakes, what am I?