Sunday, June 9
After the nice sunrise, I ate a Pro-bar and a handful of prunes for breakfast, and drank a cup of hot tea while sitting on the beach.  Even though it was so warm that I slept most of the night lying on top of my flimsy sleeping bag liner, the hot tea with honey hit the spot.  The sun was already warm, and my clothing was still totally damp in the humid salt air.  It was pretty clear that my next dry clothing would be in about 36 hours.

After doing several miles of beach combing, I decided that I would spend a good bit of the day hiking.  Chris and Carl decided to spend the day around camp and maybe get in their tents for some shade (that later proved impossible, as it was like 120 degrees in the tents in the peak of the day).  I went back to camp, packed my lunch, some emergency gear, and three liters of water, and started walking east.  My goals were to (1) find some great shells (2) see some wildlife and (3) reach the east end of Shackleford Banks where it should only be about a mile for the Cape Lookout Lighthouse.  The map at the end of this post shows where I walked.

I had already found some good shells the day before and in the early morning, but I wanted more. 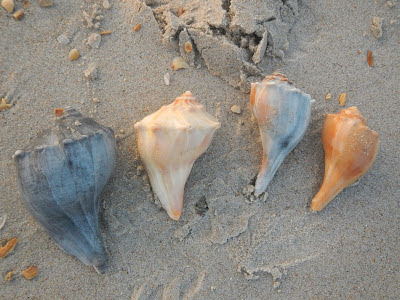 I didn't keep every nice shell.  This large whelk had several organisms living in it, including the tiny crab you can see in the photo.  He was about the size of a thumbnail. 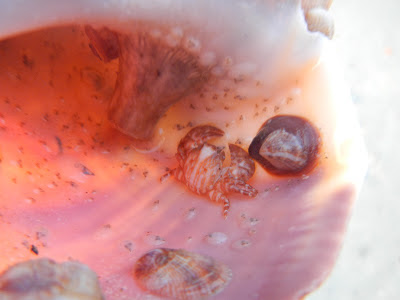 While I was finishing getting my pack, Chris told me that he would walk about a mile up with me and started out ahead.  He ended up finding the prize shell of the trip, this large queen's helmet. 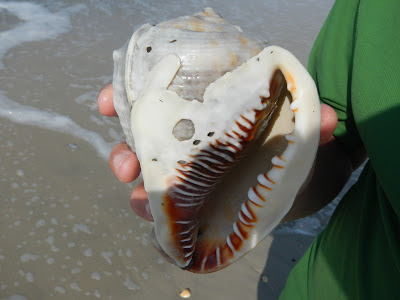 Right after that point, Chris returned to camp and I kept heading east.  I had the beach to myself.  The sun was beating down and it was already getting warm, so I took my time.  I sipped water every few minutes from my three liter camelbak.  I saw a fair number of shore birds and a few pelicans, but no people.  I also saw several animals that will be mystery "What Am I?" subjects when I have time to think up verse to go with their photos.

It is a wild and beautiful beach there. 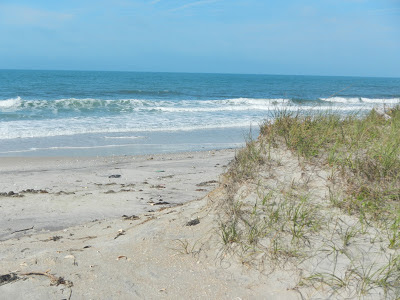 I also found this "ladder to nowhere," 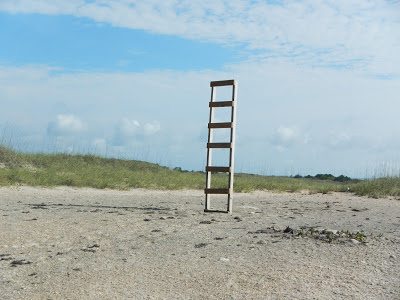 and every now and then, a ghost crab patrolled the beach. 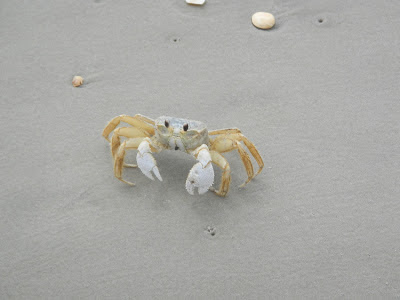 After four miles of walking, with about two more to go to the end of the island, I was really warm.  The sun was bright, and a heavy fog was rolling in with maybe a quarter of mile visibility.  I pondered whether I wanted to walk 4 more miles (turn around) or eight more (go to the end of the island).  Given that the fog would prevent a view of the Cape Lookout Light, I decided to turn around.  I did take a detour to cut across the island for views of this ibis, a small brackish pond, and this wetland on the sound side. 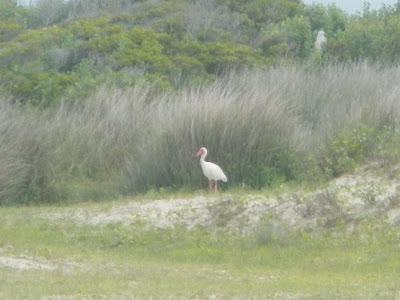 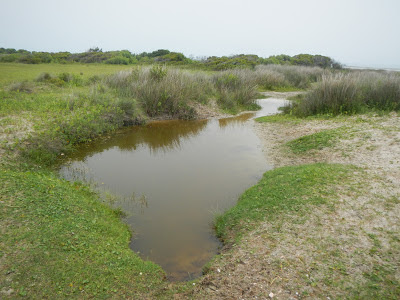 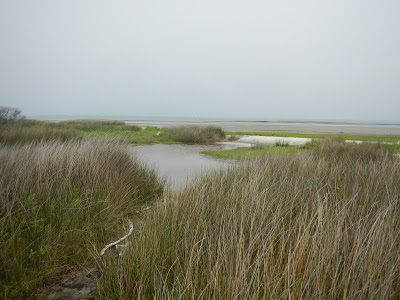 I also liked these flowers.  I saw relatively few flowers on the island. 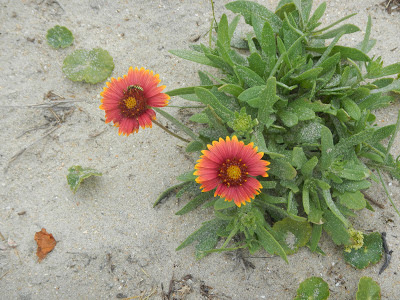 I ate my lunch (including practically drinking my chocolate bar) and continued walking back.  At times, the beach was coated in shells - there are a few pebbles in here but most of this is small shells, believe it or not. 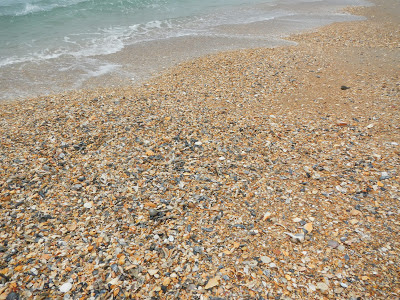 When I got back, I found that my ingenious campmates had rigged a shelter using stuff salvaged on the beach, and a poncho.  I spent most of the rest of the afternoon resting in the shade, with frequent breaks to do more beachcombing. 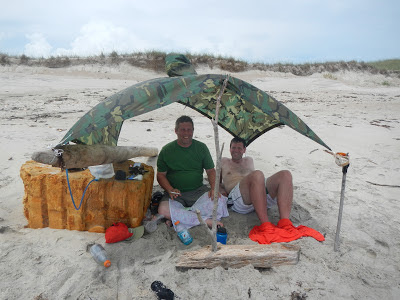 I enjoyed seeing this boat sailing along.  It made me think of my days as a sailor long ago off the coast of Maine. 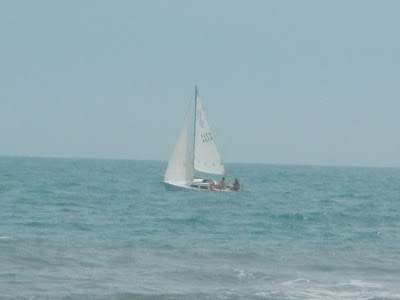 As the afternoon moved on, it got very cloudy and the winds - which had been very light all day and thus not very cooling - picked up tremendously.  A storm seemed to be coming.  Carl's tent was blowing away so we re-staked it.  It was too windy to light the stove, so we all ate cold dinners - a Pro-bar, prunes, and mixed nuts for me.  The rain never came, and we did some more exploration on the beach.  By now, it was about 7:00, the sun was behind clouds - oh, what a relief! - and Chris suggested walking inland to look for horses again.  My legs were really tired, but hey, when will I be here again?  I have all night to rest!
Posted by o2bhiking at 2:55 AM