Sunday June 9.
My second day on Shackleford Banks had been a long one.  My pedometer had over 40,000 steps on it by the time we ate our cold dinner on the beach.  Chris and Carl were looking for more shells and I just sat down to get the load off my feet.  The rain had somehow missed us, but the wind was blowing strongly (and would most of the night).  It felt so good to sit down and not have the sun beating down from directly overhead.  When Chris and Carl returned, it was something like 7:00, and Chris suggested looking for horses again, and so we set off to the interior of the island.  Before long, Chris (who's trail name is "Hawkeye") thought he spotted a few in the distance.  All the little sandy hills make it difficult to see far, but we set out, and sure enough, there they were - six this time.  They were very tolerant of our presence, a couple of them walking within 20 feet of me.  Naturally, I didn't have my camera, having left it back at my tent.  We watched them for a good 20 minutes or so, then walked back to camp.  Even though it was still light, Carl and Chris went to bed.  We all were tired.

I sat there, aware of really tired legs.  I surely had over 20 miles on my feet that day.  And then I thought "When is the next time I will see wild horses?"  I grabbed my camera and headed back in the gathering dusk to find the little band of horses.  I took some photos and watched them for a while, then headed back to camp before it got too dark to see well. 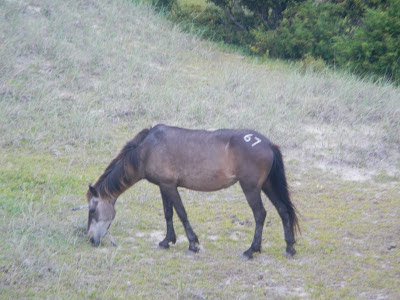 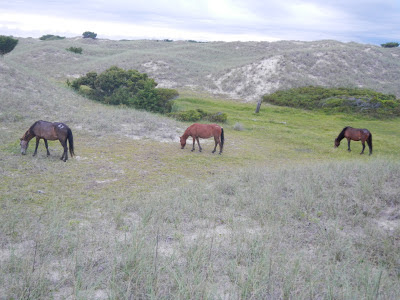 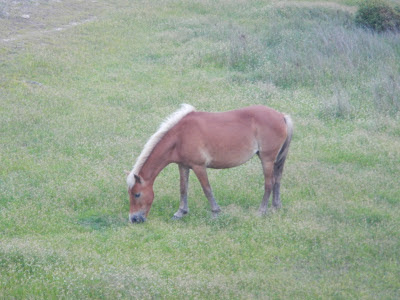 Although the light looks good in the photos above, I think it was the camera compensating somehow, as it was quite dusky by now.  I sat on the beach and enjoyed an unusual sunset.  Because it was so cloudy, it was more shades of blues than last night's pinks and oranges.  It was really pretty, and I must have snapped 15 photos from different perspectives.  Here are a few of them. 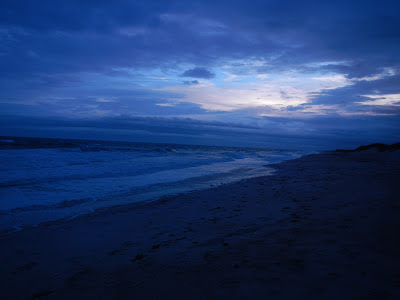 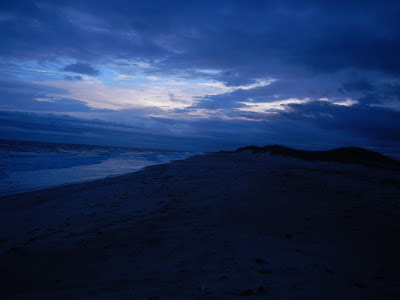 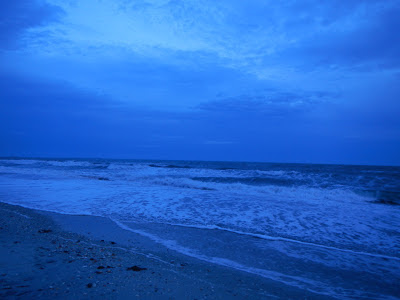 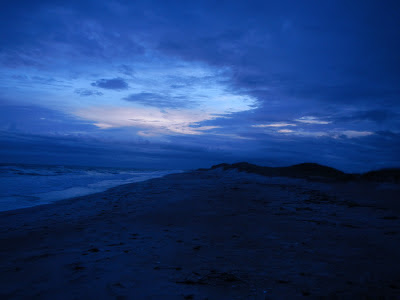 It was dark now.  I sat alone on the beach and gazed at the Cape Lookout Lighthouse winking at me every 15 seconds from seven or eight miles away.  I reflected on the past two days and what a fun adventure they had been.  Even though it was just 8:30, I realized how tired I was.  My pedometer showed over 47,000 steps for the day.  I watched the lighthouse blink four more times, then went to bed. Tomorrow at some point - clean and dry clothes, and a hot shower!
Posted by o2bhiking at 3:07 AM