Catching up here...
Monday, June 10
After being thrilled to see Shackleford Banks' wild horses yet again, I went to bed about 8:30 Sunday night.  I was really tired, but had a hard time getting to sleep, as the wind kept buffeting my little tent.  But eventually, I did sleep pretty well, and woke up in time to see one more sunrise over the dunes. 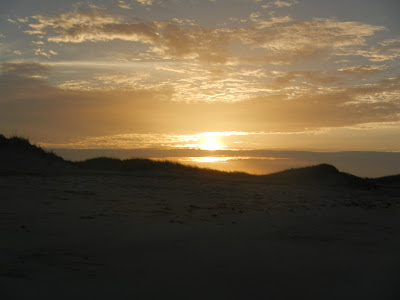 I walked for a while on the beach, seeing if I could find more shells, and just enjoying the nice morning.  A flock of pelicans coasted effortlessly above like a squadron of fighter planes: 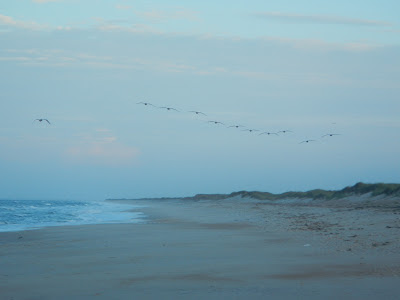 I ran into Carl, who told me he had been up since 4AM, and that he was going to pack up early and hike back down the beach.  Even though our boat was not until 1:20, he remembered there being more shade at that end of the island.  And he desperately wanted some shade, having received a good burn from the sun's rays.  So after he and I ate breakfast - and I had a cup of hot tea - I took a walk on the beach again while he was packing up.  When I got back, Carl was gone and Hawkeye (Chris) was up and about, and announced that he was going to pack up, too.  Hawkeye, having started a partial through-hike, can pack in a jiffy, and he was gone while I was still packing up.  But in about 20 minutes, I was packed up and heading the three miles back to the western end of Shackleford Banks.  The tide was coming in, but for a while, I had plenty of beach to hike on. 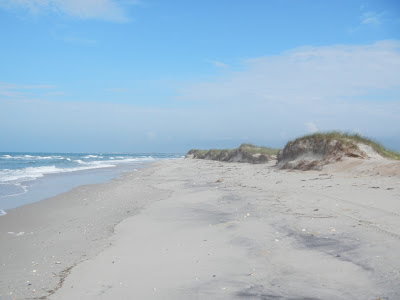 Then, I started to run out of beach... until, I totally ran out of beach to hike on - and the tide was not yet fully high! 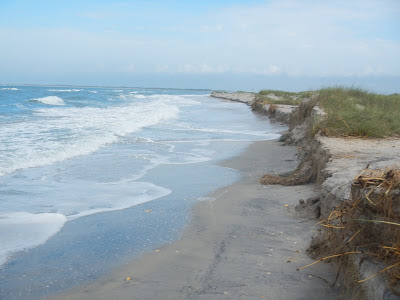 At that point, I clambered over the low dunes and picked by way through the scrubby vegetation.  With only three pounds of water instead of the 28 I had started with, my pack was a lot lighter - although I did have at least a dozen pounds of shells.  Why, these are the ones that I picked up just for my granddaughter - the pocket knife is there so you can get an idea how big some of them are: 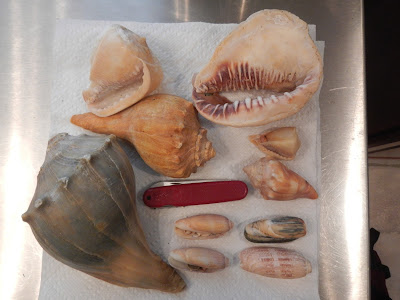 Suddenly, there were people coming the other way - a few at first, and then lots of them.  They were arrivals on the 9AM boat from Beaufort.  Then I spotted Hawkeye standing at the boat and waving to me, motioning me to come on.  So I did, and it turned out that he had spotted me hiking down the beach and persuaded the captain to wait a few minutes so we could get off the island at 9:20.  We had all had a great time, but were ready to get back to civilization.  I really appreciated her waiting the five extra minutes, and tipped her $10.  We got back to the car, changed our shirts and shoes, stowed our packs, and then, do you know what we did?  Why, we found an ice cream place, and at 10 in the morning, we each ate a bowl of ice cream while sitting in chairs - in the shade!
Posted by o2bhiking at 4:15 AM